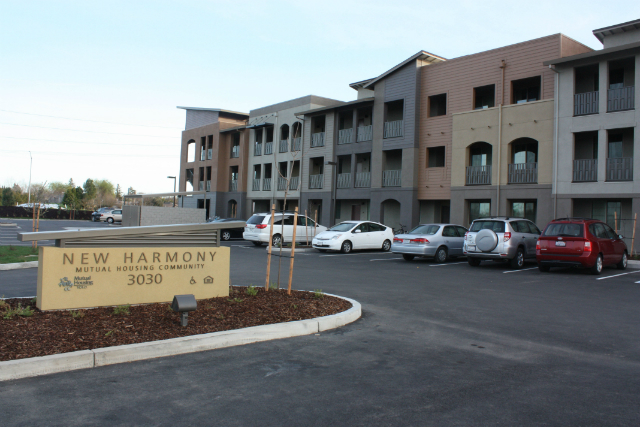 New Harmony Mutual Housing Association at 3030 Cowell Blvd. held its grand opening on Feb. 13 and opened for residential move-in on Feb. 1. Since then, New Harmony has met 57 percent of its occupancy.

There are 69 units available, made up of one-, two- and three-room apartments. To date, there are 200 residents.

According to a Davis City Council staff report, the city and its former redevelopment agency provided $8,434,391 for the project. Of the amount given, $6,643,895 was provided by the redevelopment agency and the remaining amount was given by federal HOME grants that the city receives to assist low-income households in Davis.

New Harmony is wheelchair accessible and environmentally friendly. The housing complex features solar panels — key contributors to its low price of housing — located on top of the roofs of the buildings. The panels produce 79 percent of overall energy consumption.

In addition, the complex is a green community with low-water landscaping because of the solar power that generates 75 percent of energy needs and electricity use.

“This saves the cost of energy since many living there have limited means to cover expenses,” said Vanessa Guerra, project manager at California Mutual Housing Association.

The pre-development started in 2009 by the California Mutual Housing Association. After the City of Davis approved funding, people in the neighborhood grew concerned about building low-income housing, thinking that the people living there would cause more crime, said Rachel Iskow, CEO of the California Mutual Housing Association.

Iskow said neighbors also expressed concerns about the location of New Harmony. Some believed the housing association is located too close to the freeway where there is particulate matter, which can be harmful to kids with asthma.

“Some pre-development concerns were dealt with by having studies done on the prevailing winds in that part of Davis, which were actually found to be cleaner on that side of the freeway,” Iskow said. “Also, a police chief came to a council meeting and said that the affordable housing development is not the typical cause of disturbances, but that student housing is the usual cause.”

California Mutual Housing Association was able to get the Davis City Council vote to move forward, and since construction started, there have been fewer concerns voiced. New Harmony apartments are primarily home to working families who work in Davis but cannot afford to live in the Davis community.

“I support the introduction of these complexes as there really is no denying that we need more affordable housing. The project was done in a manner that embodies Davis values and is respectful to the surrounding neighborhoods, so I see no compelling reason not to have them there,” said Cameron Smith, a third-year business major at Sacramento City College and Davis resident, in an email.

New Harmony is now fairly accepted in the community and is helping low-income Davis worker, according to Iskow.

“New Harmony helps get people out of their cars and reduces the commuting of Davis workers that live outside of Davis. Hopefully, now people [in the City of Davis] will drop their concerns,” Iskow said. “New Harmony is high quality housing. The people living there are just like them, working in schools and theaters.”