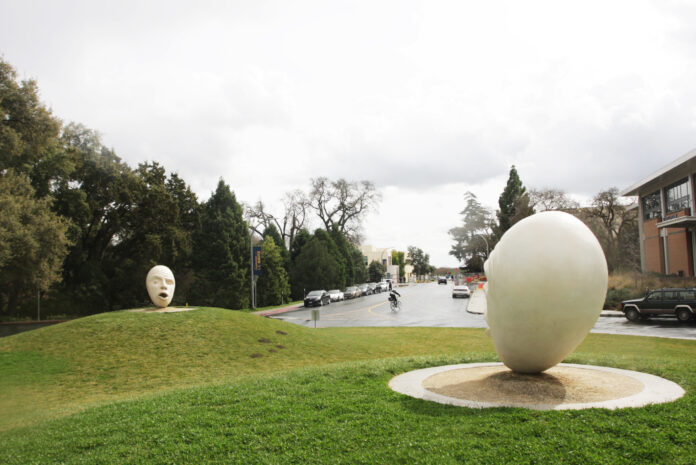 From March 15 to March 17, the second-oldest symphony orchestra in the United States, the St. Louis Symphony, will put on two free events in a three-day symphony extravaganza at multiple locations on campus. These locations include each one of the egghead sculptures.

The first appearance will be on March 15, starting at 2 p.m. at the “See No Evil/ Hear No Evil” eggheads on the grass circle between Mrak Hall and the Arboretum. The Symphony will play for three to five minutes before moving on to the next egghead, following the path of the Egghead Walking Tour and ending at “Stargazer” next to Dutton Hall. During the performances, six compositions, written by the music department faculty of UC Davis, will be performed. All pieces were commissioned by the Mondavi Center.

This event is made possible by funds from the Andrew W. Mellon Grant, supporting the Symphony’s residency with the Mondavi Center.

The second part of the series will take place in the residence halls. At 2 p.m. on March 16, members of the Symphony will perform in the lounge of Wall Hall in Tercero. This event is sponsored by Student Housing and the Mondavi Center, who will also be providing refreshments.

The final performance will be in Jackson Hall at the Mondavi Center on March 17 at 7 p.m. All members of the Symphony will be performing, as opposed to the select members from the first two events.

The Egghead Walking Tour show and the Wall Hall show are free of charge. Tickets for the March 17 Mondavi performance are available at the Mondavi Center website or ticket office, starting at $27.50 for students.

To follow the exact lines of the March 15 performances along the Egghead Walking Tour, go to eggheads.ucdavis.edu. For more information, contact mondaviinterns@ucdavis.edu.