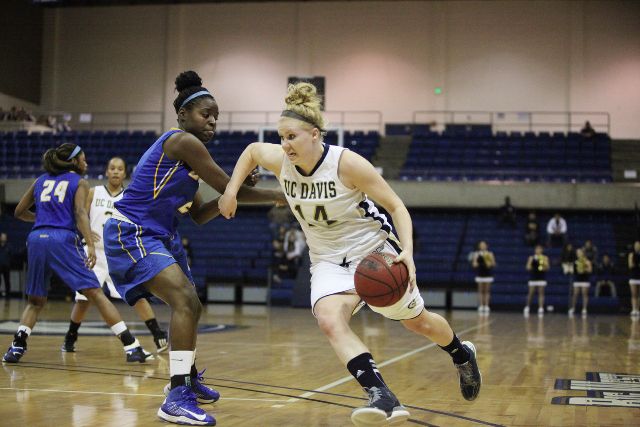 There is a saying in basketball that if you live by the three, you die by the three. This adage holds true in the case of the Aggies. The UC Davis women’s basketball team was an interesting squad this past season as they were filled with players who could shoot the long ball. At any given time, all five players on the court could be liable to hit a three-pointer.

The high-scoring Aggies gave other teams a lot of headaches, as they were third in the conference in shooting the three-pointer, posting an impressive 31 percent as a team. Their long-range prowess caused many mismatch problems as all five players on the court were threats from beyond the arc. However, the reliance on three-point shooting to account for a majority of the team’s scoring led to inconsistent results.

The characterization of Dr. Jekyll and Mr. Hyde reflects the nature of the team’s results. Some nights, the rim had a lid on it and the Aggies just could not buy a shot. On these nights, they struggled to score and could not find a rhythm. This was most evident in the Big West playoff loss against Cal State Northridge, where UC Davis shot a rough 17.2 percent from beyond the arc in the game. This was compounded by also shooting 23.3 percent from the field. Shooting performances like these do not allow any margin for error, as shown in the 61-40 loss.

However, just as often as the cold shooting hurt the Aggies, it also saved them. In UC Davis’ solid 78-69 win against USC on Dec. 21, the Aggies showed what a good shooting night can do for a team. The torrid shooting of the Aggies was a key factor in the win against a decent Pac-12 team. Shooting a fantastic 50 percent from the field including 53.8 percent from beyond the arc, the Aggies put up points in a hurry and the Trojans simply could not keep up. Games like these showed the ability of the Aggies to simply dominate teams when their shots were falling.

Through the good and the bad, the Aggies had one player who provided consistent scoring and rebounding. That player was sophomore Sydnee Fipps. Averaging 5.2 points and 2.7 rebounds a game last year, as a freshman, Fipps contributed quite a bit to a very senior-driven 2011-12 team.

Entering this year with only two seniors on the team, Fipps became one of the most experienced and important players for the Aggies. She did not disappoint, leading the team in both points and rebounds. Her 17.1 points and 5.1 rebounds a game was noticed around the conference as she was named to the All-Big West first team.

However, UC Davis’ productivity was not totally dependent on Fipps’ production. The Aggies truly played team basketball. Though Fipps led the team’s offense, the Aggies had very balanced scoring and anybody was capable of catching fire on any night.

Graduating seniors Blair Shinoda and Cortney French will be missed for their production. Shinoda was the floor general of the team, leading with her great vision and unselfish play. French was the three-point specialist who could put points up in a hurry.
“They took us to new levels,” said head coach Jennifer Gross. “Their intangibles were unmatched.”

Both players provided more than just stats though, as they were the calming and guiding influence for a fairly young Aggie team.

“Blair’s calm and leadership did not always show up on the stat sheet, but was so important to our team,” Gross said. “Cortney is going down in history as one of the best three-point shooters in UC Davis history and her leadership meant a lot to our team.”

The loss of these seniors will take an adjustment period. However, the Aggies have much to look forward to next year, despite the losses of Shinoda and French. With another year of experience, freshmen Celia Marfone, Molly Greubel, Aniya Baker and Alyson Doherty will be able to contribute even more than they did this season. Both Doherty and Greubel were already recognized for their impact play as they were both named to the conference’s all-freshman team.

“The biggest growth of a player is from their freshman to sophomore year,” Gross said. “We have five freshmen who played significant roles on our team this year, and I know they are going to put in the work and definitely improve next year.”

Furthermore, the Aggies still have their leading scorer and rebounder in Fipps. If she continues to progress as a player, UC Davis will be in a good position to succeed next season. The future of Aggie basketball looks bright, maybe even including a bid to the NCAA tournament.