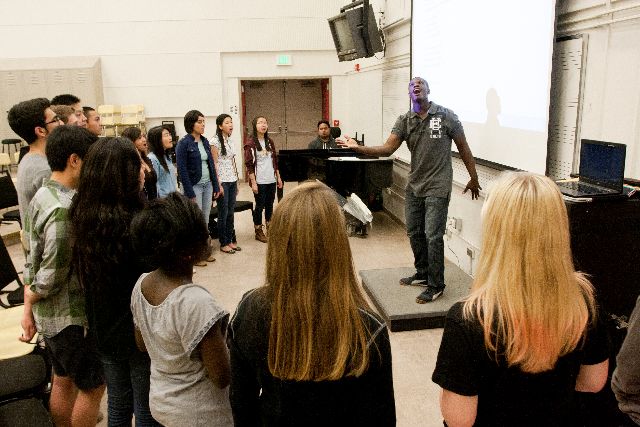 The Gospel Choir at UC Davis may not be an official course with academic credits like the University Chorus, but it remains legitimate and stays active, managing to tour every quarter.

The Gospel Choir has been around before some of its current members were even born.

“The choir was directed by Calvin Lymos for 20 years,” said Louise Ramos, a fourth-year psychology major who serves as co-president for the gospel choir.

With years of dedication and a growing group of inspired members, the Gospel Choir continues to exist after Lymos. Joseph Gray, a third-year sociology major who serves as the current musical director and arranger, has a lot of respect for Lymos.

“He really left a strong legacy here and in the surrounding communities that I’m trying my best to keep going. He’s been a real mentor to me,” Gray said.

Natalie Chieng, a fourth-year biological sciences major who serves as the other co-president of the Gospel Choir, has been exposed to and experienced a variety of gospel songs introduced to the choir.

“[‘Awesome’ by Charles Jenkins] really speaks to me, and it says a lot of the character of Christ,” Chieng said.

The Gospel Choir performs not only on campus but also at events all over California.

“We’re performing at a benefit show on campus called Pilipin@ Time for the BRIDGE group on April 6, [and] then at the Santa Clara University Gospel Festival on April 13,” Ramos said. “We’re also performing on Picnic Day.”

“It was interesting seeing what other churches do and how they perform services,” he said.
For the members of the Gospel Choir, the experience provides a way to combine their interest in music with their faith as well as a way to meet people who share similar interests.

Joe Voss, a graduate student in mechanical and aeronautical engineering, enjoys the choir as a community.

“I like spending time with like-minded people, so I feel like the music we do here adds a lot to my spiritual life and helps me cope with other, more difficult things in my life,” Voss said.

Not only does Gospel Choir seem to provide a community and gathering place for singers, performers and fans of gospel music, but it also allows the group to unwind, mentally and physically.

“It’s very energetic, soothing for the most of us,” Gray said. “Since we have it at the beginning and end of the week it’s a very good way of coping and releasing stress built up during the week.”

In the end, Gray and many other members are thankful for the entire experience. Aside from the choir environment, the uplifting music and the growing family of members, the Gospel Choir finally serves as a place of worship for those interested.

The Gospel Choir meets in the UC Davis Music Building Room 105 on Mondays from 6 to 8 p.m. and Fridays from 5 to 7 p.m. For more information about the Gospel Choir, including upcoming performances, visit gospelchoiratucdavis.wordpress.com.