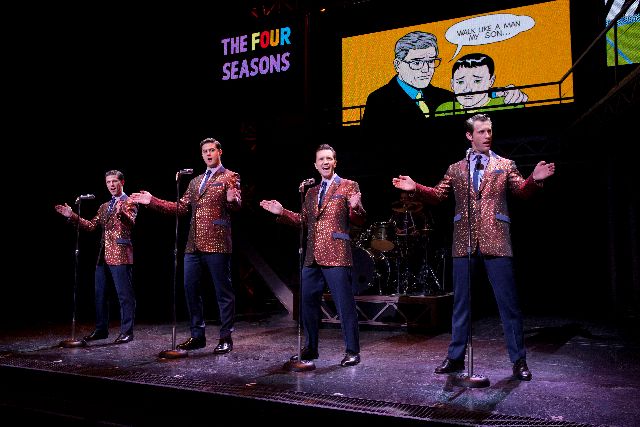 Nick Cosgrove, John Dardiner, Miles Jacoby and Michael Lomenda are the stars of the show, performing daily and traveling across the continent to entertain audiences and live their dreams.

The Aggie was invited to the first-ever SHN cocktail hour with the Jersey Boys that took place the weekend before opening night in San Francisco. The crowd, made up of a few lucky SHN subscribers, reporters and photographers, got to view the loading-in of the stage, take pictures inside of the theatre (a rare opportunity, as photography is never allowed before, during or after a show) and interact with the main men of Jersey Boys. The hour and a half was filled with hilarious inappropriate questions, personal stories and special Jersey-themed cocktail drinks.

MUSE also received front-row loge seats to opening night and then had the opportunity to converse on the phone with the talented Michael Lomenda, a Canadian returning to his role as Nick Massi. Lomenda explains why the show loves San Francisco, how he actually almost became an architect and why both college students and their grandmas can both enjoy the show.

MUSE: First of all, amazing show last night. How was it from the stage?
Lomenda: We’ve had a great time already. We’ve had some incredible audiences. [San Francisco] gets the show. They get the references and have a good time.

Speaking of this audience, how has San Francisco been for you so far?
Some people in the current cast were in the show last time it was in SF — they’re really excited to bring it back. I had never been to San Francisco. We were just so excited to bring it to this theatre — it’s such a beautiful theatre. We hire from the area for the backstage crew … The crew from town has been very welcoming.

With the weather as great as it is, I’ve finally been able to use my bike. I’ve been walking a lot. There’s great seafood.

What has been your favorite place to perform on tour so far?
Portland was a cool and funky city. Chicago is a great theatre town. D.C., Miami and Vancouver were great too. I actually ended up performing on the stages that I saw my first major shows on.

When we performed in Canada, it was a trip to perform on my home terrain. My old French teachers to ex-girlfriends attended the show. One of the first shows I got to see was Phantom [of the Opera]. I’m from Alberta (the Texas of Canada with blue-collar workers, cows and oil), and we had giant theatre companies coming through town. I also saw Tommy the Musical, and it turns out I ended up working with performers that I saw in that show.

What do you see yourself later on in your career?
I’m in my 30s, and I’m asking myself, “Do I want to be performing the rest of my life?” I can definitely see myself in the directing field. I love working with other actors. And to be a director who also worked as an actor … I’d be able to bring something different to the job. I want to write. I want to create new theatre. New York is the hub of that. Everyone is there wanting to create new stuff, and I think that’s an exciting vibe.

My goals … have changed a lot. I used to want the Governor General’s Award in Toronto — many prestigious people in Canada receive it. It signifies that you have created, developed and contributed to your career field. But now that I have this national tour, I might want to go to the U.S. and write material and surround myself with great people. Honestly, I want to buy a building. The first floor will have a restaurant with home cooking, the second will have a theatre company that focuses on edgy new works, the third floor will feature an art gallery, and the fourth floor will be a place that actors can work. The top floor will have [an] awesome city-view patio.

What are your plans after Jersey Boys?
I’m going home. My apartment is a black hole of everything I’ve sent home. Before Jersey Boys, I wasn’t stationary either. I’m going to have a great big garage sale. You’re invited. You’re all invited. Then I’m going to New York — I’m working on my green card. I plan on approaching New York with an open heart, but I also need time to reevaluate things.

But I do hope that there’s a future for me in this Jersey Boys life. All guy actors want to do this show so badly. This music doesn’t ever tire out. Twelve hundred shows. I’ve banged my head on that table 1200 times.

How has the tour influenced your life?
We’re playing guys on the road and also living it in life. In Toronto, I got to sleep in my bed. I’m more mature now. I was 28 and then joined when I was 31 or 32. Tour life does affect you in a certain way — I’ve oddly become more like my character. The soaps are still as tiny.

What’s the single worst thing a person can do during an audition?
The worst thing is when a person walks out feeling like they didn’t show who they are. I think a lot of people try and go in and fit themselves into a box. Even if you nail the audition, I think what people are actually looking for is your own personality and your own take on the role. So many people can sing and act. If you don’t have your own personal opinion of the material, you get lost in the mix.

You wanted to be an architect at first … when did going into theatre become reality for you?
In my last year of high school, a friend came home from acting college. She told me that I had to go. I thought that maybe I do. I abandoned the architecture ship. I had to reschedule everything in order to get into this school, and I had to make it work and I got in. Then I got into a three-year program. I was thrust into the business, but it helps that Toronto is a great theatre city. A couple of years into it, my parents realized that I was always busy and wasn’t asking for money anymore. You can make a living in this business. My motto is to work as hard as I can and do my best work.

Any last words?
A lot of people think Jersey Boys is old people music. It actually speaks to a wide variety of people and a wide generation. There are elements of the show that speak to college students: There are guns and cool stuff in the show. But you can also bring your grandma.

Jersey Boys runs through April 28 at the SHN Curran Theatre in San Francisco. To buy tickets or find out more information, visit shnsf.com.