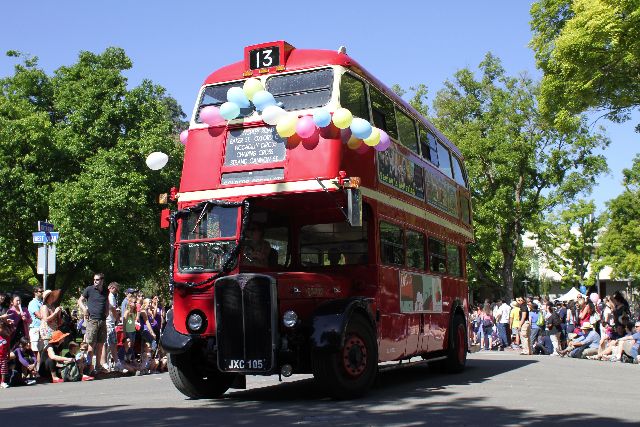 When advisor to Picnic Day Paul Cody welcomes students, faculty, alumni and the city community to the UC Davis campus on April 20, his advice is to get lost.

“Picnic Day is like the homecoming for the university; it’s when a lot of families and alumni come back to celebrate UC Davis,” said Cody, who also serves as the interim director at the Center for Student Involvement. “It just brings back a lot of those fond memories that people have. It’s really like a catalyst that brings people together to celebrate what they’ve learned and what they can learn from UC Davis.”

Rather than reaching C Street while on your way to the Arboretum from the Memorial Union, Cody wishes for people to get figuratively “lost” in what UC Davis has to offer to the community.

“It’s a showcase of what Davis has to offer; all the departments have a showcase,” said second-year neurobiology, physiology and behavior major Rock Liu, who is currently serving as a volunteer assistant parade director for this year’s event. “Everyone knows their own department very well, but Picnic Day offers you the chance to go and see what other departments are doing.”

Initially started in 1909 by a group of students that coordinated several campus activities, Picnic Day is one of the largest student-run events in the country. Although it has been around for over 100 years, the event was canceled a few times in the past, most notably during World War II.

“Back in [the] 1960s, [Picnic Day] was much smaller, but I think it was reflective of the size of the campus at that time. It’s been a sizable event since probably the early ’70s,” Cody said. “When the board has seen a need for something, that’s when it evolves. I don’t know how much it changes from year to year as compared to the larger changes over time.”

Certain events, like the Student Organization and Multicultural Children’s Faires, have been added to the schedule of events in the past 20 years, and others, such as the Davis Dance Revolution and fashion show, have been developed in more recent times.

Now, with over 200 all-day events ranging from the Doxie Derby races in the ARC Pavilion to the Chemistry Magic Show in Rock Hall, and the Battle of the Bands competition to the well-known parade tradition, Picnic Day has much to offer for attendees of all ages. In addition to student-sponsored activities, there will be between 50 and 80 academic departments that sponsor Picnic Day events.

“It’s our big chance to show off what we have here,” said third-year genetics major Paige Wilson, who is currently serving as publicity director for Picnic Day. “It’s a good opportunity for the community and the students to come together and it’s where we get to showcase what we offer here at UC Davis.”

This year’s Picnic Day theme is “Snapshot,” which will be demonstrated at the event by the Snapshot Challenge, a way for people to get interactive with the Davis campus and community by scanning QR codes at various locations, with prizes given out based on how fast people complete it.

“Snapshot Challenge is basically a scavenger hunt with clues on 30 notable events and places around campus, and everyone coming in will have the chance to participate,” said chair of Picnic Day Jonathan Wu, a fourth-year neurobiology, physiology and behavior major. “It doubles as a way to get the theme out but it also diverts the attention from the partying and drinking to the actual events on Picnic Day.”

In 2009 and 2010, drugs and alcohol were the cause of violence on Picnic Day. After these disruptions, the Davis tradition regarded to most as a family-friendly event was in danger of being canceled for good. However, with heightened police enforcement and city intervention, violence has decreased.

“That was kind of a wake-up call for everyone in Davis. Since then, a lot of regulations have been put in place,” Wu said. “Arrest incidents have decreased, so I do believe we are on our way up.”

Since Picnic Day falls on April 20, the date of a cannabis subculture observance commonly known as 4/20, there are potential concerns for harmful behavior to rise up once again. However, since this is not the first year Picnic Day has taken place on this day, Cody and event management staff are not worried about what may happen.

“I think [4/20] is a more recent phenomenon that has gained a lot more attention in the past 10 years. I didn’t even know it existed 15 years ago,” Cody said. “If you act in a manner that’s in violation of the law, putting others in harm’s way, there’s probably going to be some consequences. It’s not going to be a free-for-all [this year].”

Along with a large number of law enforcement officials present on-campus, there will be Safety Enhancement Zones downtown, where people caught under the influence of drugs will face hefty fines by both the UC Davis and City of Davis police forces.

A volunteer staff of close to 500 students will also be monitoring each event during Picnic Day, with departments working in business, publicity, parade, entertainment and parking, among others.

“The students are like the glue that holds everything together; they’re the ones that make everything happen,” Cody said. “I just help them be successful and make sure everything is getting done.”

Along with general volunteers that serve two- to three-hour-long shifts working on the day of the event, there are several assistant directors that have a large role in the early stages of planning. There are 16 board members, made up of 14 directors and the chair and vice chair. These 16 students are paid a stipend of $600 each for all of their work over the year.

Many dedicated students and staff continue their efforts year-round, as the work for next year’s Picnic Day will begin immediately after this year’s event finishes.

“It’s an ongoing process — the date for the next two years is already tentatively decided,” Cody said. “Once Picnic Day is over, people say, ‘Oh, you can take a break now!’ I wish it was that easy.”

Liu said his efforts all year will have paid off when he can watch everyone having fun on Picnic Day.

“It’s like putting on a dinner party. You don’t really enjoy something like that, but you enjoy watching your guests have a valuable and enjoyable experience,” Cody said. “It’s an opportunity to get connected, to develop some Aggie pride, make friends and to develop some skills that you’ll be able to use for the rest of your life.”

Whether you’re volunteering at or attending the various events that will hit UC Davis this month, appreciation for the Davis culture and university will be in the air.

“It’s like the California State Fair for UC Davis. It’s like a big carnival, but it’s educational and fun and the community gets to participate,” Cody said. “Those are the big things that bring value to it.”

For more updates on this year’s Picnic Day and for a schedule of events, join the “UC Davis and ASUCD Presents: Picnic Day 2013” Facebook event page and follow @picnicday2013 on Twitter.

RITIKA IYER can be reached at features@theaggie.org.