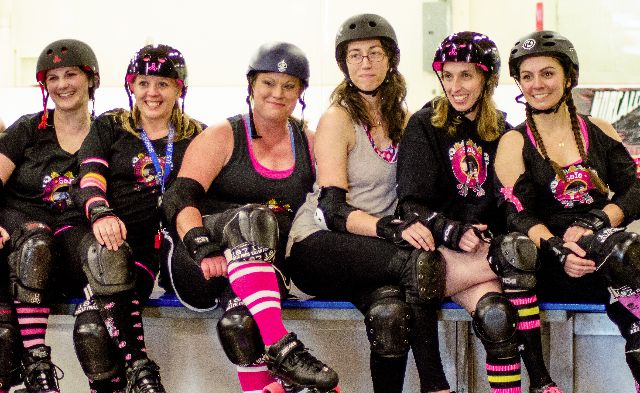 The Aggie: When was the team created? How did it start?
McPherson: Back in May of last year, I had been looking for a roller derby team. Nothing was close enough. [There’s] not much in Yolo County, so I always had to drive over an hour to try to play.

I got into touch with the only skater in Woodland [and] I set something up on Facebook — over 20 people came over. We started with the basic skating skills and we formed the board.

From the very beginning, we were hoping to possibly become a big part of Sacramento. It’s a lot of sweat and tears. It’s really hard to start a league from nothing. We lost girls on the way because of money and injuries. We’ve done everything that we’ve had to. We recently got [into] the league; we are now working to get outing. It’s a lot harder said than done.

How are you recruiting?
We [need] 14 girls to have a roster team [an official team]. We’re not there yet. Last night at Davis, we had quite a lot of girls come in. Up until this time, we have had an open rolling that anybody can come in. Since we had so many new girls coming, we couldn’t move forward. Since it was really difficult to move forward, we made the decision to stop the recruiting.

In April, we are stopping the open call so those girls will be able to get a 10-week training, allowing our team to become much better. We are not nonprofit technically since it costs a lot of money.

What does this community mean to you and the other girls?
We found it with the intention to inspire girls from all over in athleticism and have an outlet to do something. A lot of our girls are moms and you wouldn’t expect them to be doing this. It is kind of cool that they are going out and are able to do something that they wouldn’t be able to do otherwise.

Personally, it is really great for me. It’s not all about my kids, but something else for me. It’s a really good workout and the girls are awesome. It’ll be a lot easier when we are nonprofit and are able to help people in the area. This was the goal from the very beginning.

How will the team reach out to the community?
With our rink time, it’s not cheap and the majority of the dues have been going to that. We have to pay for things as things are going on, so the big thing is for sponsors to give us money.

Now we’re trying to find a new location to practice and support the amount of money to become a nonprofit team. Even when we get to the profit to have a non-roster team, we still need to pay for uniforms and gear, and we will have to pay monthly dues so that the dues cover that. It takes a lot of involvement and commitment.

We can raise money through canned food drives and local charities. Sponsor money that comes in every month [will also help]. This way we can give back to the community. Once we get that, it will help us with our rink time and operational time.

Do you compete?
Once we get a roster team we will. We don’t have the level yet. But we are hoping it will happen soon.

How often are practices and where are they?
Right now we practice once a week. So far we have been practicing at a skating rink. We basically get the leftover time to practice, so that kind of sucks. We’ve been using outside places as well.

The problem is finding someone to let us use a space. We use the type of wheels that don’t mess up the floor. There’s no damage done, but people have this general idea that it’s going to hurt something. I’ve been diligently trying to find somewhere. We’ve learned to skate properly so that we don’t fall. People have practiced in airplane hangers. Yesterday, we got kicked out and we ended up skating in the basketball court. It’s difficult but we’re working hard to figure it out.

If people are interested but don’t want to necessarily skate, is it still possible to be involved?
If there are those interested in roller derby, there are a lot of things to do that are not only skating. We need non-skating officials for timing and penalties. We’re trying to do a promotional video — [it can be for] a school project or something. It’s been difficult to find them, but we need all kinds of people.

When will you be having your next info session and tryouts?
At the end of the month, the open call will be closed. The next open call would be in about 10 weeks. People are welcome to come to practices and watch.