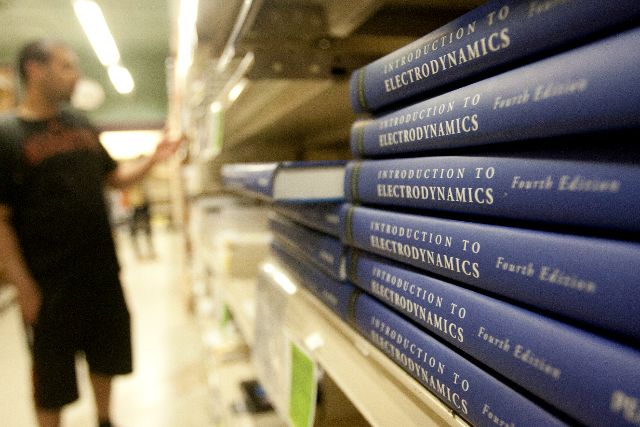 On Feb. 19, State Rep. Tim Donnelly (R-Twin Peaks) proposed the Textbook Relief Act, which would exempt textbooks from sales tax in California. Donnelly said the initiative is an investment in California’s future.

“We need to do something to signal to students in California that we actually want them here, and that we want them to complete their education,” Donnelly said. “Every student’s success is California’s success.”

Donnelly said he believes the bill aligns the financial incentives with the desired behavior, which is completion of higher education.

“When students get out of school and get a full time job, they become part of the income stream for the state,” Donnelly said.

According to Donnelly, California has a surplus of money that simply needs to be redistributed so that money isn’t wasted. Donnelly said that the sales tax exemption on textbooks wouldn’t be detrimental to the state’s budget.

“There’s money all over the place that we’re wasting on things. To me, this would be a sound investment because it essentially says we’re serious about producing an educated workforce — we’re willing to invest in students that show promise,” Donnelly said. “I want to make this the most prosperous and freest state in the Union so [that] everybody wants to come here.”

Donnelly estimates the tax exemption would put approximately $100 back in the pocket of the average California student.

“Our unit sales have increased based on our rental program,” Meley said.

Meley said she believes that although a tax break provides relief, the bookstore has been providing relief through the rental program.

As the assistant director of course materials, Meley seeks out as many variations of the course material as possible to ensure students are confident in their purchases.

“Quite a few instructors say, ‘I want this version because it costs less,’” Meley said.

According to Jason Lorgan, stores director at UC Davis, the rental program lowers the cost of textbooks by 70 percent and is utilized by 15,000 UC Davis students.

“Our goal is for as many students to have course material as possible, and at the lowest price,” Lorgan said.

Lorgan said that he believes instructors’ first priority is content, but that they are still concerned with price.

“We often hear from publishers that the conversations they used to have with faculty used to just be about content, and now it’s about content and price,” he said.

Scheiner said that if he found a textbook of equal or only slightly better content-value to his customized course pack, he would choose a course pack to save students money.

Scheiner said when it comes to students who study the social sciences and humanities, the Textbook Relief Act would have a lower impact because of the lesser use of textbooks in their courses. In contrast, he said the bill could save students in the natural sciences and related majors a much more significant amount of money simply because of the use of textbooks in their courses.

According to Scheiner, his colleagues in the political science department make a conscious effort to choose course material with prices in mind.

“An example would be someone who uses a single textbook for one class, as opposed to using multiple books and that kind of stuff — they’re doing this in part to contain the cost for the student,” Scheiner said.

Scheiner said he thinks anything that can be done to encourage people to continue higher education is a positive thing.

“I think this a great idea. In fact, it is something in my view that [textbooks] should not be taxed,” Scheiner said.

Second-year managerial economics major Jodi Brenner said that although she would prefer to have textbooks exempt from sales tax, she is concerned about the effect the tax exemption could have on students financially burdened when it comes to the price of tuition.

“Would the government have less money to provide financial aid for students?” Brenner said. “If taking out the tax doesn’t negatively affect students, then I would encourage it.”

SYDNEY COHEN can be reached at city@theaggie.com.