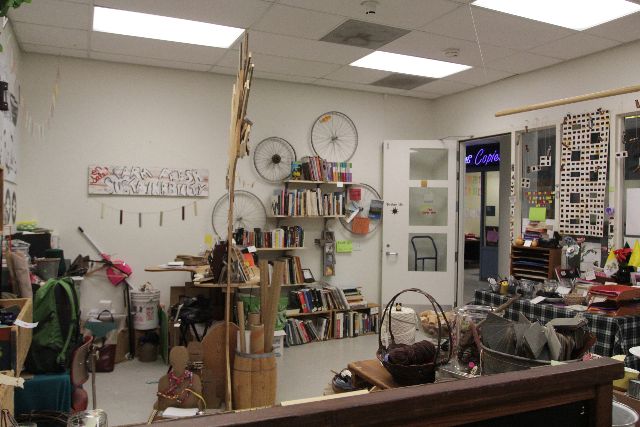 Since its grand opening in January 2012, the Aggie Reuse Store has been functioning successfully as a new unit on campus by exceeding projected sales and meeting the necessary sales quota to remain open to the student community.

Formerly known as Aggie ReStore, the Aggie Reuse Store is located in Room 163 in the east wing of the Memorial Union, across from Classical Notes and Campus Copies.

The store sells donated, used items at a low cost as a means of keeping reusable items out of landfills. Through the low-price items they offer, the store is also a helpful resource for low-income students.

According to design professor Ann Savageau, who assisted in the unit’s development, the Aggie Reuse Store is the first of its kind in California and perhaps in the nation in terms of being a reuse boutique, with attractive merchandising and educational endeavors.

According to unit staff, Aggie Reuse, though still young, is functioning successfully.

“You have to remember that the store is completely outside the usual bureaucratic template of the University, and there were a lot of hurdles to overcome to make it a reality,” Savageau said.

Aggie Reuse makes between $450 and $800 monthly depending on school holidays and breaks. Since the unit does not pay rent for their location, it must uphold or exceed the projected sales quota of $3,069 for this fiscal year in order to remain open on campus. According to fourth-year communication and design double major and co-director of the Aggie Reuse Store Kristie Wu, the unit has already met this quota.

“In the year we’ve been open, we’ve shown that we are financially successful as well as a great and unique asset to the campus’ sustainable ambitions. I expect us to reach a lot more students in the future and establish ourselves further as a sustainable unit, encouraging more and more students to reuse,” Wu said.

According to Wu, the unit’s location in 2014 is yet to be determined. Due to plans for renovating the east wing of the MU, it is possible that the store may be relocated to the Silo.

Savageau inspired the creation of the unit, according to Dateline UC Davis, because she gathers community waste for use in her sustainable design class. With the help of graduate students Margot Bennett of the Textiles Department and Carol Shu of the Design Department, along with the collaboration of former ASUCD Senator Darwin Moosavi, the Aggie Reuse Store was created.

“[We] wanted to do something more ambitious: create a store that would have the goal of educating the campus community about the great potential in so-called ‘waste’ materials. We wanted to make an attractive store that looked like a fashionable boutique rather than a thrift store,” Savageau said.

Aggie Reuse is able to sell reusable items through donations. Bi-monthly donation drives are held, where everyone is able to donate items such as books, clothes, school supplies and houseware. Donations are also made from campus departments and offices.

“I love it when people come in and get excited about our goals to have more people creatively reuse what would otherwise end up in landfills. One of our biggest goals is to attract students who are new to the concept and intrigued by the creativity of it. My expectations come from better publicity because that is how we will inform people on how the Aggie Reuse Store is more than just a thrift store and how students and the general public can save money and the planet by becoming involved with our unit, ” said second-year communication and religious studies double major and co-director of Aggie Reuse Store Krystol Smith. “The Aggie Reuse Store is a movement to divert unwanted items from the landfill and reuse them as they are or create something more unique out of them.”

The unit has collaborated with the on-campus Lost and Found, which donates unclaimed items to the unit. Student Housing also gathers monthly donations from the dorms, according to Wu. In addition, Aggie Reuse has collaborated with classes like a sustainable design class, a Field Guide Class to Sustainability and a local Girl Scout troop.

“We’ve also participated in events like the Student Wellness Fair, Cool Davis Festival [and] Recyclemania, and were one of the features that helped UC Davis reach its No. 1 Cool School rating in Sierra Magazine,” Wu said.

Although there are currently no plans for expansion, Savageau expressed a desire to expand the store’s working hours and its educational outreach and to bring on more volunteers. Currently, the staff is composed of two paid positions, which are held by Smith and Wu, interns and volunteers.

The Aggie Reuse Store is open Monday through Friday from noon to 3 p.m.