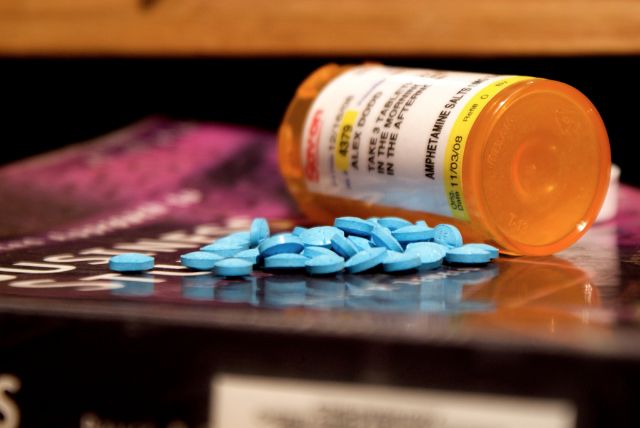 With the pressure of financial and social success riding on academic performance, a growing trend has emerged: Students seeking an upper hand are turning to a little orange pill.

Beating the deadlines
“I needed to read 250 pages of my political science textbook before a test and I ended up doing it in two hours,” said Matt, a first-year biochemistry major. “It just was such a desire to study. I’ve never read that fast in my life. I took the test the next day, and got an A. There was no way I could have caught up without Adderall.”

According to the National Institute on Drug Abuse, Adderall and other amphetamine salts are stimulants normally prescribed to patients who suffer from Attention Deficit Hyperactivity Disorder (ADHD). When taken as directed, the medications remove symptoms of these conditions and have a calming, focusing effect. Those who do not require the drug for medical purposes experience intense focus, inability to sleep and jitteriness.

“I had to write a big paper Fall Quarter,” said Dave, a first-year evolution ecology and biodiversity major. “I started at 8 p.m. and worked all through the night, wasn’t even tired, finished the paper and went straight to class to turn it in that morning. It’s intense. Adderall doesn’t make you want to eat, sleep or do anything other than study.”

In recent years, a national trend has emerged: College students such as Dave and Matt have begun buying and consuming Adderall without any medical need for the drug in an attempt to improve test scores, stay up late working or focus on assignments and tests. Although taking Adderall without a prescription is illegal and forbidden by colleges, some students see the benefits outweighing the risks.

“It’s not a test-cure all, it’s just a cramming genie,” said Brad, a second-year exercise biology major. “Before I started taking Adderall to help cram for finals, I had a cumulative 1.8 GPA and was on academic probation … Since I started taking it, my GPA has been increasing and I was able to get it up to around a 3.0.”

Supply and demand
According to The National Survey on Drug Use and Health, 15 percent of college students have admitted to using psychotherapeutic drugs for non-medical use. Of those 15 percent, seven percent claimed to use Adderall to either increase attention span, party or improve grades.

UC Davis students suspect that Adderall abuse on our campus may be even higher than those statistical findings.

“I’ve gotta say that at least 50 percent or more of the people I know use it or have used it. Probably about 30 percent are prescribed; ADD and ADHD are really common,” said Kate, an anonymous second-year who asked not to specify her major. Kate has a prescription for Adderall, and previously obtained it from dealers and friends before being diagnosed with ADHD and receiving her own prescription.

The U.S. has steadily reported increases in ADD and ADHD diagnoses, and the CDC’s Morbidity and Mortality Weekly Report determined from a 2010 survey that one in 10 children is diagnosed with ADHD. The condition is on the rise nationally, and due to the nature of self-reported symptoms, prescriptions like Kate’s were filled after only a few conversations with a psychologist and health care provider.

“If you can’t get a prescription for Adderall, you’re the worst actor ever,” Matt said.

The purchase
When a patient’s prescriptions don’t match a realistic dosage requirement, a black market opens up for students to buy or sell pills that are not critically needed. While some deal the pills to strangers, for the most part, friends share and sell their personal prescriptions to those that they trust in order to avoid legal trouble.

“I used to buy from a dealer. I would meet him [on] the Quad, hand him my money and get my pills. That’s sketchy, though — I wouldn’t do that,” Kate said.

Kate has shared and sold her pills to friends in the past. While she is currently trying to wean herself off of her reliance on the pill for worries of dependency, and suspects that she may not actually need the pill to function, she has a filled prescription that she will sell for $2 to $5 per pill if she finds herself needing some extra money.

Like any other market, students buying Adderall find that the price fluctuates and is susceptible to supply and demand shifts.

“The price goes up a lot during finals week, but I tend to pay around 20 bucks on three or four pills,” Brad said. “That’s enough to get me through finals. That’s the most I’ll pay for it. I’ve heard about kids dropping 50 bucks on pills, though, because they need it.”

The price
Finances and illegality are not the only drawbacks to abusing Adderall. Like all things too good to be true, Adderall and drugs like it come with a hefty number of side effects and impacts on health, the most significant of which is dependency.

“People become dependent on the amphetamines, and it stops working for them even when they keep taking the same dose. So what happens is the doctor [increases] their dosages so they can begin to see results again. When you take it more [frequently], you build a dependence,” Saad said. “When you build that dependence, you lower your ability to focus the same way you used to before taking it in the first place.”

Dependency has a weighty impact on long-term users. Adderall tricks the brain into stopping the production of dopamine, a chemical that helps regulate mood.

Studies conducted at UCLA found that long-term users of Adderall, when the natural levels of dopamine are reduced, experience “severe depressions and mood dysregulation,” which subsequently cause high rates of aggression, psychosis and suicide in those who take it.

Those who have taken the drug have their own descriptions of the physical toll it takes.

“I started my dosage with 20 milligrams in the mornings, and I’d almost have feelings of elation which would last until the late afternoon,” Kate said. “When it wore off, I’d start to feel awful. I’d feel really sick to my stomach because you don’t want to eat while you’re on it. I changed my dosage, and it helped. I also get headaches now, which never happened before Adderall.”

“I’ve been told by a paramedic that if you continuously take it without having ADD or ADHD that the receptors in your brain won’t make the connections normally anymore. It destroys the synapses in your brain, essentially,” he said. “It’s always in the back of my head when I do it. I’ll take one or two pills once every four months, though, so I don’t do it enough for it to be a problem. I only use them for finals.”

Need versus want
Due to the nature of the condition it is prescribed for, some are not worried about possible long-term effects of taking Adderall.

“It’s so funny because everyone [has] a little ADD, everyone can benefit from increased focus, everyone is a little absent-minded,” Kate said.

ADD and ADHD are relatively new diagnoses in the medical world, only gaining national attention in the 1970s. Healthcare professionals, as well as those who take the drugs themselves, question the legitimacy of being prescribed Adderall to treat symptoms.

“I have the feeling that [increased Adderall prescriptions] are a product of multitasking and our culture, that we have made it so that people are unable to focus more,” Saad said. “Some might actually have these conditions, but there’s no telling; they don’t give themselves a chance to really try and focus. But it all goes back to the doctors and their prescriptions.”

While some have legitimate medical requirements for the drug, others admit that poor study habits along with a cycle of procrastination and panic led to their reliance on the drug.

“Sometimes I wonder, like, am I always going to need to do this, will I ever be able to focus on my own?” Brad said. “I don’t know. I’ll cross that bridge when I get to it.”

DISCLAIMER: Names of those who discussed their Adderall use have been changed to protect their privacy.

HANNAH KRAMER can be reached at features@theaggie.org.