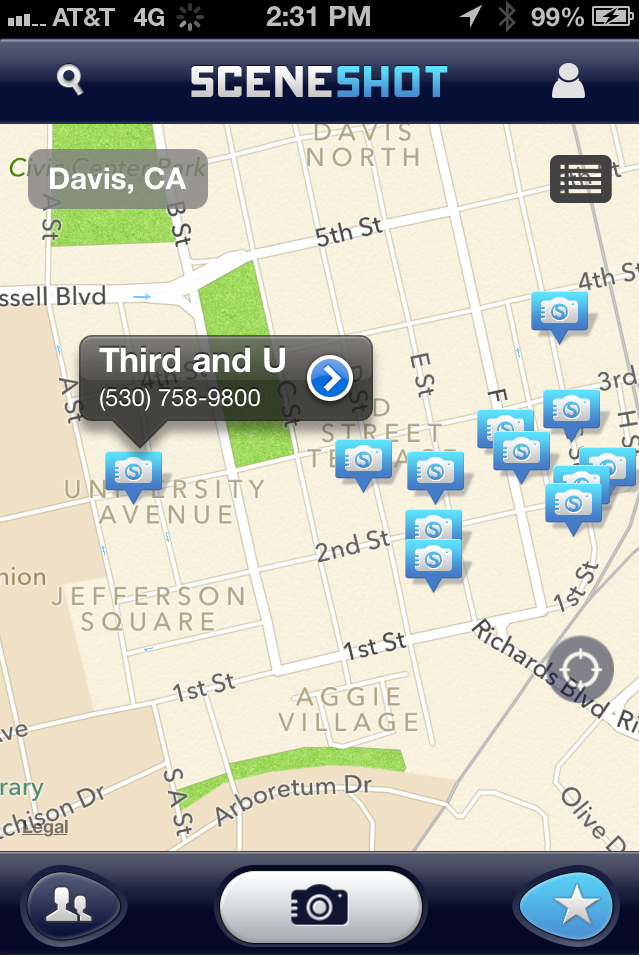 Ever wanted to go out to town and know which bars were busy so you could plan ahead? Ever wanted to know in advance how long a line at a concert would be? SceneShot, a new app for the iPhone designed by two undergraduates at UCLA, allows you to do this and more. Chase Hallerberg, one of SceneShot’s designers, talked about the app and its uses.

MUSE: What was the genesis of SceneShot?
Hallerberg: Two summers ago I was working in SF at a tech company that was working in mobile industry. My partner, Alvin Hsia, was working at another tech start-up. At the end of the summer, Alvin came up to me while we were getting drinks with the idea for the app. I liked the idea, and when we went back to school, I went up to him and told him that I would like to do it. We pooled our money together and got incorporated. Initially, we tried to outsource it to a group of developers in Russia, but it didn’t work because of the language barrier and because we basically couldn’t pay them enough to care about it. At the end of the the last school year, we got our family and friends to invest in us and we eventually contracted a company from Toronto, the Konrad Group, to develop the app.

How did you and Alvin come up with the idea for SceneShot?
It was Alvin’s initial idea. Whenever we went out at night, our friends would tell us where they were by sending us picture messages. We decided that it would be a good idea to make an app for that, where a whole community sends pictures to each other.

Can you describe SceneShot?
Basically, we’re [moving] community and friend-generated photos to in-app profiles. As a user, you can take a photo of a place while you’re out and can upload it on your profile. Taking a photo acts as a form of check-in, so you can see where your friends are by looking at their photos. You can also look at locations near you and see what the community as a whole is doing.

The app sounds primarily like a social app, but how can someone use it in regards to art events, such as a concert for instance?
For a concert, it would be a little bit different, but you can kind of see when the concert starts to get going. For example, if you didn’t know what time the artist was going to show up, you can kind of gauge when they’ll show up through the photos uploaded at the venue. Besides this, you can use the app to see when the concert will be crowded, or as a way to know how long the line will be. At bars with live music, you can see when the artist who is performing that night shows up and you can hashtag the artist’s name so the community will know. With more users, the information becomes more real-time.

So far the app supports six cities, including San Francisco, Chico and Los Angeles. Why did you decide to incorporate Davis?
Davis is a really unique college town, because you have a campus and right next to it is the town of Davis so all the bars are close together. It’s harder to do this for a big city like New York, because there are so many places to go that it becomes difficult to implement this. It’s easier to see where people go in cities like Davis or Chico, which are smaller and have like 10 bars.

What do you think about the evolution and popularization of smart phones? Apps such as yours really take advantage of these new advances in technology.
I think it’s making it much easier to use your location to find stuff. The GPS and Wi-Fi features in your phone really enable you to see where you are and to pull from different sources to find information. It’s relieving the need for you to plan out your night or even your day. Before, you had to call and set up reservations, but now it’s easier for you to just go out by yourself and sort of freestyle your plans.