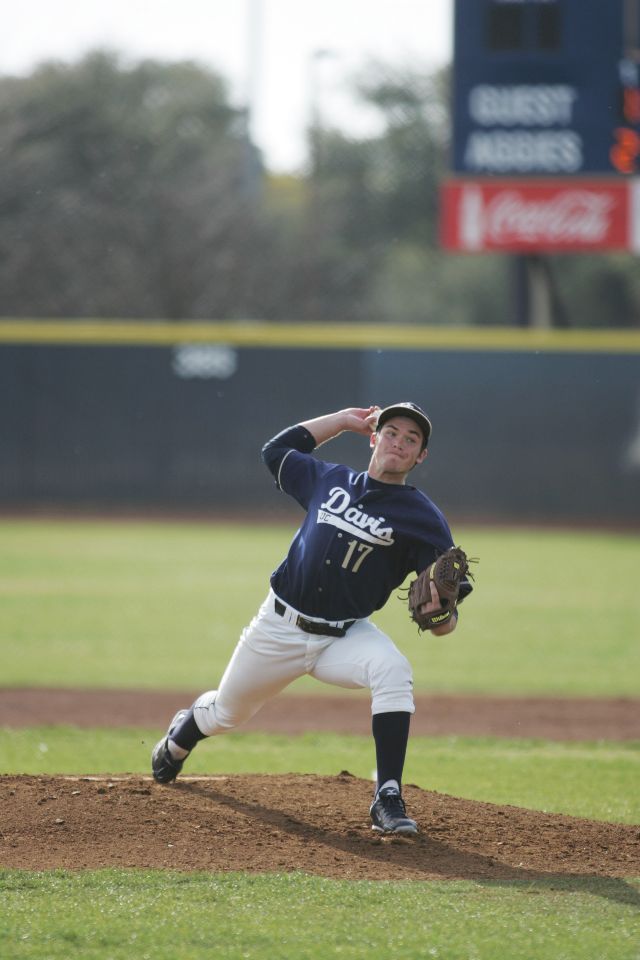 Teams: UC Davis vs. UC Riverside
Records: Aggies, 12-22 (0-9) ; Highlanders, 17-15 (6-3)
Where: Dobbins Stadium — Davis, Calif.
When: Friday at 2:30 p.m.; Saturday at 1 p.m.; Sunday at 1 p.m.
Who to Watch: The lack of recent run support for the Aggie pitchers cannot be blamed on junior Nick Lynch. Lynch’s batting average stood at a blistering .349 after the Long Beach series. UC Davis has struggled to hit the long ball and has only managed to hit six home runs this season. Lynch has two of those six home runs to go along with his 18 runs batted in.

The lack of recent run support for the Aggie pitchers cannot be blamed on junior Nick Lynch. Lynch’s batting average stood at a blistering .349 after the Long Beach series. UC Davis has struggled to hit the long ball and has only managed to hit six home runs this season. Lynch has two of those six home runs to go along with his 18 runs batted in.

In other words, Lynch has hit a third of the Aggies’ home runs and has driven in almost 12 percent of the Aggies’ runs. Lynch has been UC Davis’ most consistent offensive threat, constantly getting on base.

Lynch bats in the middle of the order and as a result should have some great opportunities to drive in runs. However, the Aggies simply do not get on base enough for Lynch to do some damage. If UC Davis can manage to get runners on base, Lynch should be able to catalyze the Aggies’ offense against UC Riverside.

Did you know? The Aggies have a 3-0 record when they hold their opponents to two runs or less. This is a little surprising as the Aggies have had trouble bringing in runs as of late. However, it does highlight the importance of solid pitching.

UC Davis does manage to score a decent five runs per game. However, they have also been giving up around 6.5 runs a game. Thus, the Aggies’ pitching staff needs to buckle down and hold teams to fewer runs. The 5.31 team-earned run average is simply too high for UC Davis to consistently compete and win games.

As evidenced by the statistic, if UC Davis pitches well, it will win. The offense has generally been able to produce at least two or three runs a game. If the Aggies can hold their opponents to a few runs a game, they stand a good chance of turning their season around.

The Aggies are now 0-9 in conference play as they have been swept by Cal Poly, Cal State Fullerton and now Long Beach State. Of the three, Long Beach State seemed to be the most winnable game, as the Dirtbags’ record was far from impressive.

However, UC Davis must now look past their rough Big West conference start, and look toward the next series against UC Riverside. The Highlanders have a better record than the Dirtbags, but are a team which the Aggies can beat.

One of the biggest struggles which the Highlanders have faced is winning on the road. They have a 5-11 record on the road, while maintaining a perfect 11-0 record at home. Hopefully their struggles continue as they come to face the Aggies.

The UC Riverside pitching staff has struggled to keep runs off the board as evidenced by their 4.59 team ERA. This includes a starting pitching staff with an ERA of 4.71. The Aggies’ batting order, led by junior Nick Lynch and senior Paul Politi, should be able to take advantage of the weak Highlander starting pitching. The more runs UC Davis is able to score, the better the chances are of winning the weekend series.

However, senior Trevor Frank has a 4-0 record with a 0.75 ERA. The Highlander relief pitcher has more wins than any other pitcher on the pitching staff. This might not be impressive, were it not for his 26 strikeouts. Frank has one less strikeout than the Highlanders’ leading strikeout pitcher, junior Ben Doucette, but has pitched 17.2 innings fewer than Doucette. The Aggies may run into some trouble against Frank if his name is called on often to relieve UC Riverside’s starting pitching.