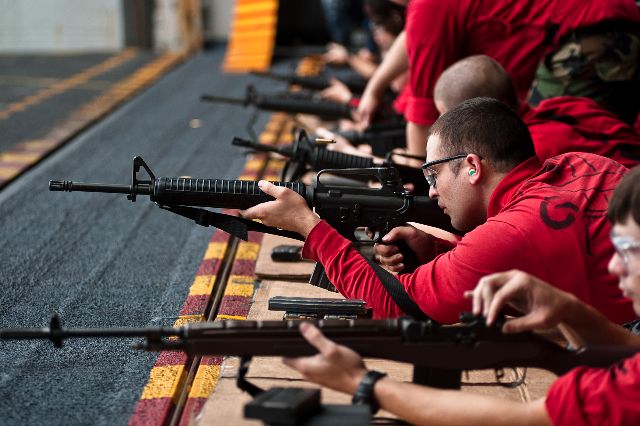 As a result of numerous incidents of gun violence across the country, the City of Davis hosted a Feb. 19 forum on ending gun violence.

Renowned gun violence researcher Dr. Garen Wintemute from the UC Davis School of Medicine spoke at the forum, along with Amanda and Nick Wilcox from the California chapter of the Brady Campaign to Prevent Gun Violence.

The forum prompted a group of Davis officials and community members to submit a letter to state and national legislators expressing support for a change in gun control and safety in order to reduce incidents of gun violence, said Susan Lovenburg, a member of the Davis School Board.

A group of officials who signed the letter attended the California Senate Public Safety Committee’s public hearing on April 16 for the LIFE (Life-saving Intelligent Firearms Enforcement) Act. The LIFE Act is a set of eight bills aimed at improving firearm safety and protecting the community from gun violence in California. The LIFE Act was passed by the Senate Public Safety committee by a 5-2 vote against Republicans objections on April 16. The legislation will now advance to a second senate committee for further consideration.

“We are closing loopholes in our current laws regarding assault weapons and high-capacity magazines,” Amanda Wilcox said. “There’s a bill that would regulate ammunition. [There are] bills to keep firearms out of dangerous hands, [which] would add to the list of people who are prohibited from owning a firearm and provide more funding for the Department of Justice to disarm dangerous people who own a gun. There’s also an education piece that states that to get a firearm, you have to take a safety test.”

Davis is working to start a Yolo County chapter of the Brady Campaign as a result of the February forum.

According to a press release distributed by the Brady Campaign, California is one of the top states when it comes to gun control legislation and the state already has some of the firmest gun laws.

The gun legislation debate
Support for the new legislation is not unanimous. There are many California citizens who disagree with the eight bills in the LIFE Act.

Sim Sangha, a third-year sociology major, disagrees with the new legislation. Sangha is studying to become a police officer and has had internships in law enforcement for many years.

“Personally, I think it’s OK to have them because it is a part of our constitution,” Sangha said. “I purchased all my firearms legally, so I should be able to own them. However, when new owners come and buy firearms, I definitely feel like there should be some kind of training that comes before they are able to purchase it. Just because we have the Second Amendment, doesn’t mean you should be able to purchase them right away.”

Currently in California, prior to purchasing a firearm, individuals are required to take a 30-question test beforehand. Afterwards, there is a 10-day waiting period when an extensive background check is conducted. Additionally, owning firearms in California is considered a privilege and people who fail to pay bills and taxes on time lose their right to purchase a gun.

Debates over gun legislation are often polarizing because both sides feel very strongly about the issue. However, many of those who disagree still talk of the need for laws to regulate gun purchase and ownership.

“There are a lot of classes out there that teach safe gun ownership, but they are really expensive,” Sangha said. “There are gun safety classes offered for free that a lot of people just choose not to go to. A lot of people take guns and think they are toys, and they are definitely not.”

Finding common ground
Groups like the Brady Campaign and Moms Demand Action support common sense gun laws that are acceptable to both sides. The definition of what those gun laws might look like differ on opposing sides of the issue.

Moms Demand Action is a grassroots campaign movement started by a mother in Indiana after the Sandy Hook Elementary School shootings in Connecticut. They are a nonpartisan group and aim to find a balance in opinions that is difficult to achieve when discussing gun legislation, said Melissa Bauman, a member of Moms Demand Action.

“Our focus is at the federal level,” she said. “We feel that state laws are a good stepping stone, but if some states have weak gun laws, it just means that guns can be purchased in those states and then transported across the border.”

On the state level, Connecticut and New York recently passed new gun control legislation. On the national level, the Gun Violence Prevention Task Force appointed by President Barack Obama has met with people on both sides of the issue to come up with a set of laws that they feel respect the Second Amendment and would help protect the community.

However, on April 17, the U.S. Senate defeated that set of bills aimed at increasing gun control. The set of bills included a ban on assault weapons, a ban on high capacity magazines, and a bipartisan compromise to expand background checks for all gun purchasers.

According to The New York Times, Obama called it “a pretty shameful day” when he spoke at the White House after the votes.

Linking mental health
The National Rifle Association (NRA) opposed these federal bills and said in a statement that “the last thing America needs is more failed solutions to our nation’s most pressing problems. Congress should instead focus its energies on the things that will actually keep our families and communities safer — prosecuting criminals who misuse firearms, securing our schools and fixing the broken mental health system that keeps dangerously ill people on the street.”

Wintemute discussed the public health aspects of gun violence, including mental health, at the forum. His research focuses on the nature, determinants and prevention of firearm violence.

Wintemute said in an op-ed article in The Sacramento Bee that although California has done a lot in the area of gun control, there is still more that can be done. Over 3,000 people die from gunshot wounds in California each year.

“A college campus is not immune to gun violence, and a weapon in the hands of a dangerous person, whether it’s in a movie theater or a first-grade classroom or a college campus, presents a danger,” Amanda said.