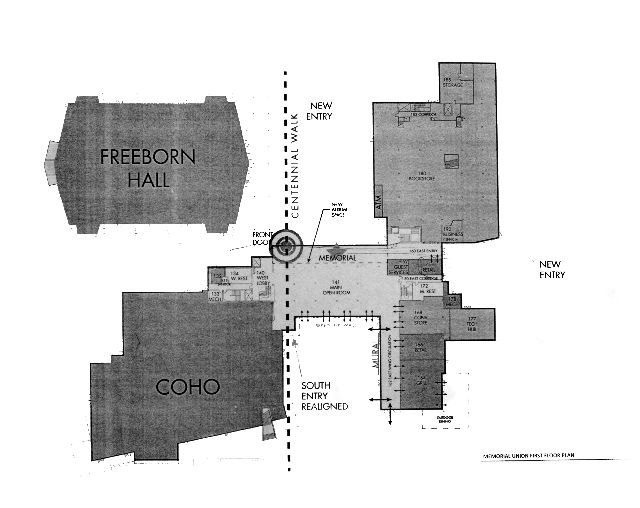 The Memorial Union (MU) is scheduled to receive a new venue in July 2015.

During the renewal project of the MU, the space that is currently occupied by the post office will feature an entertainment venue which will also function as a pub.

The addition of this venue to the MU will be a component of the $19 million east wing renewal project. The east wing renewal project consists of renovating the outdoor spaces on the Quad, the first two floors of the MU and the bookstore. The money for the renewal will also go toward renovations of the Bike Barn, third floor of the Memorial Union and South Silo.

According to ASUCD president Carly Sandstrom, since the venue will be located where the post office is now, there will not be any structural changes.

The MU renewal project has provided an “opportune moment” to bring this entertainment venue to campus, according to Sandstrom.

Bringing a pub to UC Davis was one of the platforms of Sandstrom and vice president Bradley Bottoms. However, the idea originated from the previous term’s executive office. Sandstrom and Bottoms are collaborating with Campus Recreation and Union on the MU east wing renewal project and creation of the venue.

“We really just want to have a pub on campus because we think we need a new center for student life. We want something that will also be a headquarters for Aggie pride. We just really need something that is kind of the basis for that, since we think that’s something that’s so lacking on campus, is that sense of tradition and pride,” Bottoms said.

The cost of the venue is still uncertain. According to Campbell, it is estimated that the venue will be 2,800 square feet and that construction will cost between $400 to $500 per square foot.

“[ASUCD] would have the build out responsibilities [in] regards to the food service. [They] are still trying to come up with that platform and [the kitchen],” Campbell said.

He also said that the type of furniture usually seen in a pub will be included.

The funding for the MU east wing renewal will come from the reserves of the memorial fee and bonds. The memorial fee is an $85 fee students pay annually and between $5 million and $7 million of those reserves will be used for the project, according to Campbell. The remaining balance will then be financed through bonds.

“There had been a feeling all along by the associated students or at least the leadership of the associate students that they need to participate at some level with the program,” he said.

ASUCD will be contributing approximately $500,000 to the MU east wing renewal project, according to Sandstrom.

“The more money we invest the more we’re going to get out of it and I don’t know the exact number of how much the pub will be per se, but overall it’s a pretty expensive project. What’s great about it is that we’re not increasing student fees for it. We’re taking all kinds of money that we either already have or are in our reserves or are preparing for this project in taking out bonds to pay for this slowly in time,” Sandstrom said. “But we’re not increasing student fees and I think that’s [the] great ingenuity of UC Davis being really committed to not increasing fees.”

The space is still in the early stages and therefore there are many things that are still to be determined including the name, the hours and the menu of the pub.

Campbell expects that it will be open between 85 to 100 hours weekly.

“It’ll be open as much as the students want it to be open … When completed, the Memorial Union will be open for extended hours much more than it is today. It will probably follow the hours of this facility [ARC] closely,” Campbell said.

The menu is currently being discussed, but the food that is expected to be served is the “CoHo’s take on pub food,” according to Sandstrom. The beef will come from grass-fed cows and the chicken from cage-free chickens. Healthy options will also be available for those that prefer them.

“I think the people that we would be serving our pub grill concept is completely different from what Gunrock Pub is. It’s more that student environment and really I think the only maybe competition we have is with the Coffee House — and it would be run by the same management so we’re really happy about that,” Bottoms said.

The entertainment venue is being modeled after other university student unions, pubs and bookstores that Sandstrom, along with Campbell, former ASUCD controller Melanie Maemura and former President Rebecca Sterling toured.

“We didn’t like that [UC Irvine] didn’t have a very Irvine feel to it and here we have so many bars, the bar scene kind of goes along with Davis because what else do you do? … We really have to identify ourselves as why you want to come here and it looks cool, it feels cool and it’s a multifunctional space that you can study at you can drink it you can have fun at all in one,” Sandstrom said.

The new part of the MU will feature an indoor and outdoor venue along with space that permits performances, something that is not currently possible.

“We’d have karaoke, trivia and local bands play. KDVS and Entertainment Council are really excited to start working on the entertainment aspect of this because we don’t have anything like that, that small to midscale show,” Bottoms said.

Although alcohol will be served, the venue will be available to all, and students will be asked to provide identification at the bar when purchasing an alcoholic beverage, according to Sandstrom.

According to Campbell, alcohol will not be served the whole time the venue is open.

“It’s a different scene from the bar scene in downtown on the weekends. It’s a completely different concept where we’re looking to have it be a fun activity space rather than a heavy drinking space,” Bottoms said.

The space will also feature entertainment in the form of shows, trivia and showcasing Aggie away games.

“We really want it to be an environment where people can feel the presence of the history of where we come as a university to where we are today, and kind of the culmination of that and we think it’ll be a really cool location for that in addition the whole Aggie pride thing,“ Bottoms said.

LILIANA NAVA OCHOA can be reached at campus@theaggie.org