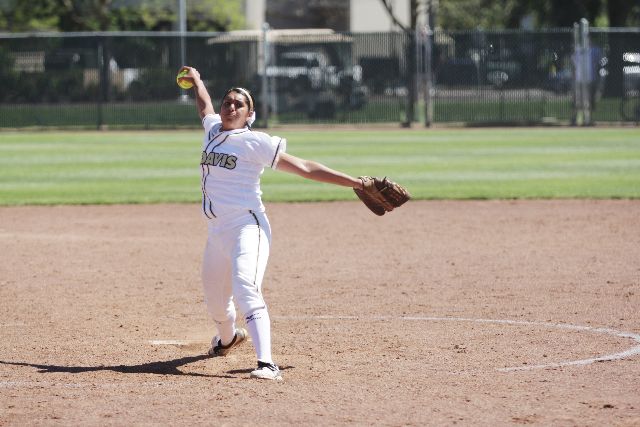 Teams: UC Davis at UC Riverside
Records: Aggies, 17-21 (4-7); Highlanders, 16-24 (0-9)
Where: Amy S. Harrison Field — Riverside, Calif.
When: Saturday, April 20 at 12 and 2 p.m.; Sunday, April 21 at 12 p.m.
Who to Watch: Freshman Christa Castello has been a terror on the base paths this season. She is tied for sixth in the Big West for stolen bases, with 11 steals. This, along with her impressive .287 batting average and 11 runs batted in after the UC Santa Barbara series, will definitely cause UC Riverside’s less than stellar pitching staff some problems.

With the Highlander pitching staff prone to giving up home runs, the addition of Castello on the bases gives the UC Riverside pitchers something else to think about. Thus, the Highlander pitchers may not be as focused on making the best pitch and could make a costly mistake leading to big hits for the Aggies.

UC Davis needs to find consistent run production, and the series against UC Riverside seems like the perfect opportunity. Castello should be able to help spark the Aggies’ batting order in the weekend series.

Did you know? Senior Kelly Shulze has been hit by a pitch 15 times this season, taking the phrase “take one for the team” to a whole new level. Shulze’s resiliency to keep getting in the batter’s box is impressive. She has also shown impressive patience at the plate, drawing 14 walks this season.

Her propensity to draw walks and get hit by pitches has earned her an impressive .433 on-base percentage. This is the fifth highest in conference. Her ability to get on base should prove helpful for the Aggies as they attempt to jumpstart their offense against the Highlanders. Hopefully this does not involve Shulze getting injured.

Preview: The UC Davis softball team has had an up-and-down year so far. They have had impressive wins this season, such as the 14-1 stomping of Santa Clara. However, they have also struggled mightily this year, as evidenced in Arizona State’s 12-3 rout of the Aggies.

However, the Aggies do have hope heading into the weekend series in Riverside against the Highlanders. Though UC Davis lost the past weekend’s series against UC Santa Barbara, the pitching was stellar. They held the Gauchos to only two runs the entire series. Such impressive pitching has been a recurring theme this season as the Aggies have a combined earned-run average of 2.40.

The pitching staff is led by sophomore Justine Vela who, as of the series against UC Santa Barbara, owns an 11-6 record as well as an outstanding 2.14 ERA. In her recent performance against the Gauchos, Vela pitched a complete game shutout, only allowing three hits and striking out five. Such dominant pitching displays will make winning the weekend series against UC Riverside a lot more attainable.

The real challenge for the Aggies is consistent hitting. In the last series against the Gauchos, UC Davis scored an impressive eight runs in the first game. However, they were subsequently shut out by UC Santa Barbara in the next two.

The bats of sophomore Amy Nunez and senior Kelly Schulze, which have produced five of the Aggies’ eight home runs this year, may prove crucial in the series against the Highlanders.

UC Riverside’s pitching staff has given up a total of 34 home runs this season and as of their game against San Diego State, hold a team ERA of 5.37. Obviously, pitching is not one of the Highlanders’ strengths. The Aggies must take advantage of this, and could possibly have a field-day jumpstarting their offense.

The Aggies should head into the weekend series with a sense of confidence. The Highlanders are a very pedestrian team and should give the UC Davis’ offense the spark which they have needed this season. Hopefully, the Aggies can turn their season around starting with UC Riverside.