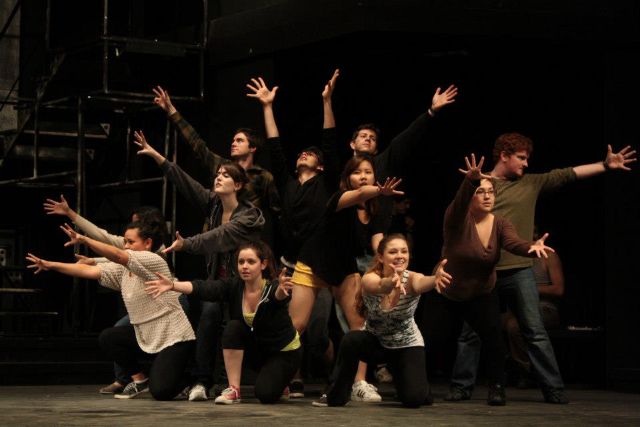 This month, Studio 301 Productions presents a comedic musical with themes of social acceptance, gothic overtones and a half-man, half-bat protagonist.

Batboy: The Musical tells the story of Batboy, a monster who is found in a cave in West Virginia. Batboy is adopted and educated by a local veterinarian. However, a cattle plague kills the town’s livestock, causing the locals to scapegoat Batboy, kicking off the plot.

“The musical is based in gothic literature and horror films and it gets bloody and gory, but in a fun way,” said Christopher McCoy, a performance studies Ph.D. candidate and the show’s director.

McCoy saw the original off-Broadway production in 2001 and loved it. “At the time it was so fresh and new to see a musical that was a parody of other musicals, but now we’re very used to this type of humor. I felt like it would be fun to return to one of the originals and reinvent it for our time,” he said.

McCoy showed the musical to Alexander Stalarow, a musicology Ph.D. student who had previously worked as an assistant music director on RENT.

“I gave it a listen and my first thought was that it was going to be really hard to pull off, since there are a lot of tight harmonies, meter changes, rhythmic irregularities and musical styles,” Stalarow said.

Stalarow joined the production as the musical director after being convinced by McCoy and began to work through the score.

“The show parodies other styles of musicals, and the music goes along with it,” Stalarow said. “There are numbers right out of vaudeville, country, rock and heavy metal. There are direct musical quotations from other musicals and it has been a great pleasure to find them.”

Stalarow noted that the show has appeal to audiences regardless of their knowledge of musicals.

“If you’re into musicals, you’ll have a lot of fun with all of the parodic moments. If you’re not, the music is catchy, clever and fun enough to keep you engaged,” he said. “The live musicians from the music department are very talented, the singers are wonderful and we put together something that sounds very good.”

Cheyenne Splinter, a second-year animal science major, is the stage manager for Batboy, and it’s the first time she’s held this position for a UC Davis production.

“I did stage managing in high school, and I’ve been an assistant stage manager here,” Splinter said. “The experience was different than I thought it would be, but in a good way. I expected this to be more difficult than it turned out. The cast works really well with me and each other. This is one of the best experiences I’ve had as a stage manager.”

The cast is also very engaged in the musical. Marcos Sastre III, a junior specialist at the UC Davis Center for the Mind and Brain, stars as Batboy.

“Batboy starts as an illiterate bat-child who eventually becomes an erudite literary scholar. He comes into his own and discovers how he fits into society. It has been interesting to develop this character honestly and exhibit his changes in a way that keeps to the spirit of the play’s mock nature,” he said.

Sastre has high praise for the crew as well.

“There’s a lot of stuff that goes on in this musical and both Chris and Alex provide specific guidance, which has helped me grow as an actor. I’ve been grateful to have had them and everyone else in the cast to guide me,” he said.

Sastre urges people to come and see the show.

“It’s not what you may expect. It’s really funny, it features a talented group of individuals and I’m shaving my head for it,” Sastre said.