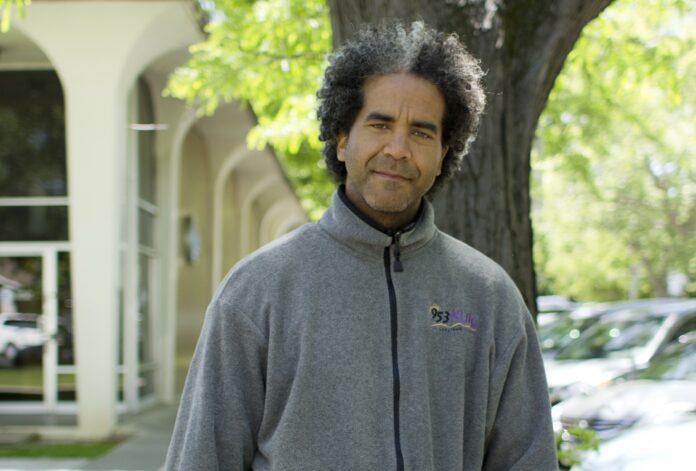 David Breaux cuts a familiar figure at the corner of Third and C streets, a location he has frequented for almost four years compiling Davis residents’ conceptions of the word “compassion.”

On April 28, a collaboration of environmental activists, artists and musicians will join Breaux at “Compassion Corner” to celebrate the construction of an Earthbench commemorating his dedication to raising awareness for compassion.

The project — spearheaded by Breaux — will incorporate input from UC Davis alumnus Brennan Blazer Bird and locally renowned ceramic artist Mark Rivera. Together with Breaux under the banner of compassion, they will work to produce a functional public artwork that will serve as a lasting reminder of Breaux’s work in the Davis community.

“The bench will provide a permanent monument to David’s work, which is to raise awareness about compassion. It’s going to invite people in to share and reflect on their notion of compassion, even when David’s not there,” Bird said. “It’s that sort of deeper meaning and purpose that makes the project so special.”

Breaux — commonly referred to as the “Compassion Guy” by the public — felt that the reception to the concept of both those involved and the general public has been overwhelming.

“I am so grateful for the response I’ve received so far and the willingness of people to support this project,” Breaux said. “I’m amazed that so many others are interested in supporting and bringing awareness to compassion.”

‘Compassion to the earth’
The Compassion Corner Earthbench follows on from the work of the Peace on Earthbench Movement (POEM), a nonprofit organization founded by Bird in the spring of 2011. POEM’s mission is to build 1,000 Earthbenches — which are constructed entirely from bottle bricks and cob — in a myriad of locations across the globe.

Bird became close friends with Breaux during his time as a UC Davis undergraduate and was particularly enthusiastic about the synthesis of his organization’s work with Breaux’s ongoing campaign for compassion.

“Compassion comes in so many different forms, and the direction we’re taking with this particular fusion of the projects is that you can show compassion to the earth by transforming your waste into something for the community,” Bird said.

Bird also felt that the collaborative element of the project was one of the driving forces.

“The collaboration involved is a big part of the project. So many different elements are being tied together under the theme of compassion,” he said.

This was a sentiment shared by Rivera, who will embellish the bench with compassion-themed ceramic tiles designed by Davis locals after construction has taken place on April 28.

“This project is so layered. It’s a great way to strengthen the community as everyone has a way of being involved. The ownership is not just with one person, and it’ll be energized by everyone that has put their concentration of compassion into this community build,” he said.

Funded by compassion
Construction is set to take place between 9 a.m. and 4 p.m., during which time parts of Third and C Streets will be closed off to facilitate the process. Anyone is invited to participate in the project in a multitude of different ways.

“We’re accepting donations through funds, through bottle bricks and trash, and through people’s donation of their time and energy,” Breaux said. “We’re so grateful for any contribution people feel they can make.”

The event will feature live music provided by local Davis band Tha Dirt Feelin. Guitarist Colin Borges, who has also been involved in the organization of the construction day, was particularly optimistic about the event’s turnout.

“It’s going to be such a fantastic event, there’s real viral video potential for compassion. Everyone’s supporting each other, which is what the world really needs right now,” he said.

The project, which was unanimously approved by both the Civic Arts Commission and Davis City Council on March 9 and March 26, respectively, will be funded entirely through donations. The bench will therefore be considered as a gift to the city’s public arts collection.

“The city is so incredibly appreciative and thankful to be receiving this gift,” said Carrie Dyer, community services supervisor of the Civic Arts Commission. “The bench will provide Davis and its residents with a special place to be able to reflect on compassion.”

Dyer added that while the city has no immediate financial obligation to the project, part of the agreement was that it would take responsibility for the upkeep.

“We agreed that once we take it into our budget, we will cover any maintenance costs that are incurred,” she said.

As the site of construction is legally the property of AT&T, the project had to be approved by the company.

“As one of the largest telecommunication companies in the world, connecting people with compassion is something that AT&T is fully behind,” said Tim Ray, regional vice president of external affairs at AT&T. “As soon as we heard about the project, we were happy to do whatever we could to put the wheels in motion.”

The process
The project has experienced little to no resistance from a logistical perspective throughout the entire process. The consensus among everyone involved is that the relative ease of the project can be attributed to Breaux’s standing in the Davis community.

“He’s such a calming, amazing person. He draws people in and helps them to reflect on what compassion means to them. People want to give back and be a part of something that’s so special to our community,” Dyer said.

This was a sentiment that was echoed by Bird.

“There’s so much support for what David does here as he’s such a recognizable presence in Davis. People really believe in his mission and want to help see this project realized as a result,” he said.

JOE STEPTOE can be reached at city@theaggie.org.