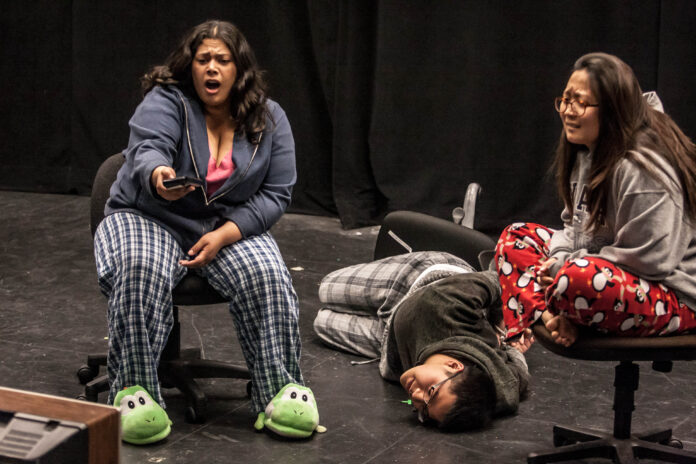 Consisting of various 5-minute acts, Undergraduate One-Act plays, Main Stage Dance performances and midnight sing-along showings of The Rocky Horror Picture Show, the Edge Performance Festival showcases the performative talents of undergraduate and graduate students alike. The festival runs from April 25 to 28 and May 2 to 5 at Wright Hall and Wyatt Deck.

David Grenke, artistic director of the Edge Festival, described the types of events to be featured during the festival.

“Hour of 5s is an hour of five-minute cabaret pieces that showcase students’ talents, which can be singing, acting, dance, monologues or however they develop and express their creative process,” Grenke said. “The One-Acts are written and directed by undergraduates. They are each under 10 minutes in length, and the idea for that is to really focus on the craft of writing and directing plays.”

“The dance performance is a capstone for Dance majors in the choreography track. The three undergraduates each produce their own piece and then collaborate on one piece, with a total of four pieces. Stylistically, most of the pieces will be modern dance or contemporary dance influenced by contact improv,” Grenke said.

Maribel Lopez, a fourth-year dramatic arts and psychology double major, choreographed a piece for a Main Stage Dance performance after planning its themes since last year.

This year, the dance pieces showcase individual and group performative visions, each with vastly differing thematic concepts, styles and themes.

“My piece is a trio of two females and one male. I explore the idea that we are chained to the discourse in which we are raised due to the societies and institutions that surround us, which makes it difficult to break away from that and become tolerant to new things,” Lopez said. “For me, this piece is a translation of my thoughts into movement. However, when you see the piece, you might not necessarily see the exact theme I had in mind, which is good because the audience should be able to come in and create their own story and interpretation.”

The collaborative dance piece, choreographed by three undergraduates, is a duet of two males.

“We’re trying to explore the different aspects of relationships, more specifically abusive relationships. It’s not necessarily about romantic relationships, but friendships in general, and the abusive elements that occur that might not be obvious,” Lopez said.

The festival allows for students to showcase their work with resources provided by the Department of Theater and Dance, including access to costume designers, stage lighting and sound technology.

Although the Edge Festival involves several performance pieces that are a part of the theater and dance curriculum for its majors, it is also an opportunity for non-majors to participate and showcase their talents.

Kazia Hart, a second-year psychology major and director of one of the One-Act plays, discussed how she became involved in the festival.

“I am in Dead Arts Society because I love theater, and we were doing auditions for our winter showcase when I was asked to direct one of the One-Acts for the Edge Festival,” Hart said. “I think Edge Festival is an important event to have on campus since it provides the opportunity for students to submit their work and for non-theater majors to get involved with the arts.”

“It’s a performance art piece that really embraces the ridiculous. There’s no real narrative or character development, but a theme I’ve been working with is power reversals. There’s a lot of interesting interaction between audience members and actors, prisoners and officers, narrator and people in the play,” Hart said. “It makes you question what’s funny and what’s not, and it challenges the idea of understanding when it’s appropriate to laugh at certain things during the performance.”

To end each Saturday evening performances is the sing-along midnight showing of the cult classic film, The Rocky Horror Picture Show, on Wyatt Deck. Audience members are encouraged to rent costumes in advance in the Enchanted Cellar, located in Wright Hall.

Grenke discusses why Rocky Horror is relevant to the Edge Festival’s artistic mission in the field of performance studies.

“The history of Rocky Horror as a cult film really brought out the idea of the performativity of identity. At a Rocky Horror screening, you get the opportunity for role play, and that is something that has given it its strength as a cult film and why it has lasted so long,” Grenke said. “It includes some level of considering performance and makes us think about how that exists in our everyday lives.”

The Main Stage Dance, Hour of 5’s and Undergraduate One-Acts will be performed in different locations in Wright Hall. For more information about the Edge Performance Festival, visit theatredance.ucdavis.edu.