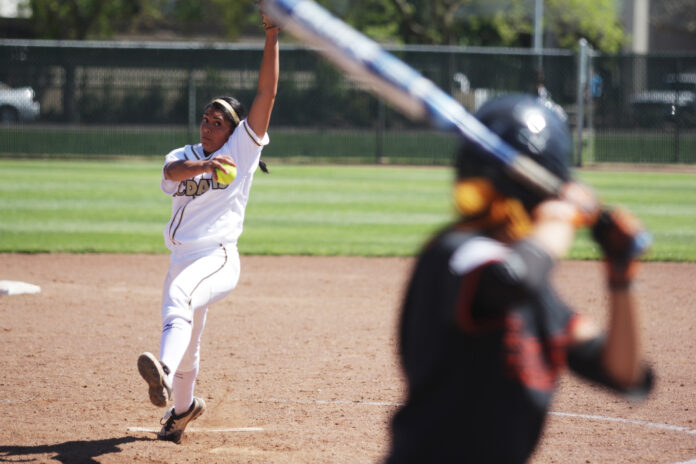 Teams: UC Davis vs. Cal State Fullerton
Records: Aggies, 19-23 (6-9) ; Titans, 21-25 (6-8)
Where: La Rue Field — Davis, Calif.
When: Saturday at noon and 2 p.m.; Sunday at noon
Who to Watch: The Aggies recently won the weekend series against UC Riverside, with a recent 1-0 shutout victory in the weekend finale that showcased some fantastic pitching. The shutout was pitched by sophomore standout Justine Vela, who held the Highlanders to only two hits in seven innings. She got the win, improving her record to an outstanding 12-7. Her stellar pitching has resulted in a 2.18 ERA.

Vela has not only allowed very few runs this season, she has also completely dominated the batters. Vela has struck out 155 batters this season and only allowed 52 walks. This is gives her a respectable 2.98 strikeouts per walk.

UC Davis relies on solid pitching to win games, and Vela is definitely the ace of the pitching staff. Her ERA is currently fifth lowest in the Big West and she is third in the conference in strikeouts. With such noteworthy stats, the Aggies are always in a position to win the game with her on the mound.

Cal State Fullerton has a solid batting order. However, with Vela pitching in one of the three games, the Aggies feel confident that they can come out with a win in the series.

Did you know? UC Davis has three pitchers who have some of the lowest ERAs in conference. Sophomore Justine Vela, and freshmen Marissa Chapa and Leah Munden hold the fifth-, sixth-, and seventh-lowest ERAs respectively.

With such young but solid pitchers, the Aggies should have a great pitching staff headed into the future. The Aggies should try to capitalize on such stellar pitching, especially with the levels that these three are performing at now.

The Aggies’ lack of run support has prevented victories this season. However, if they can manage to turn their hitting slump around and get a few runs, the pitching staff seems more than capable of shutting down opponents’ offenses.

Preview: The Aggies have struggled a bit as of late, losing four in a row before winning the last two games of their weekend series in Riverside against the Highlanders. UC Davis seems to have fixed its problems though, and the last two wins against UC Riverside have shown that the Aggies have the ability to beat almost anyone.

With a stunning team ERA of 2.39, the record of 19-23 simply does not match. The reason lies with the struggling offense, which has only hit .233 as a team this season. They also have nine total home runs and 123 total runs scored. The Aggies only average about three runs a game. That gives the pitching staff very little room for error.

The offense is led by freshman Christa Castello and redshirt sophomore Amy Nunez. Castello is currently hitting .296, which is the highest on the team, along with 13 RBI. Nunez is tied for the team high in home runs, with three, and is hitting .279 with eight RBI. The Aggies must get some consistent offense from the rest of the players, including senior Kelly Schulze, who has three home runs and 13 RBI. However, she is only hitting .191.

The Aggie pitchers will definitely need to watch out for the two run-producing Titan batters, sophomore Eliza Crawford and freshman Melissa Sechrest. Crawford is batting an outstanding .318 with seven homers and 24 RBI. Sechrest is hitting .162, but has six home runs and 20 RBI. These are the two key batters in the Titans’ batting order. If the Aggies get these batters out, they should be in good position for getting a few wins.