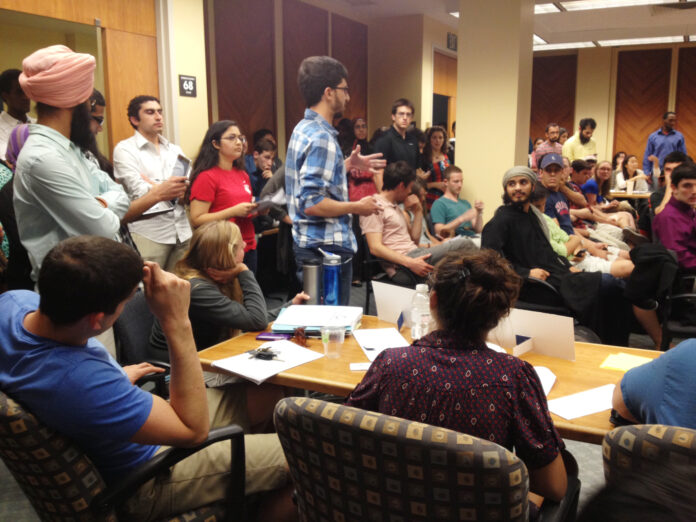 After approximately five hours of discussion, the ASUCD Senate passed Senate Resolution 21 on April 25 with a 7-4-1 vote. The resolution condemns Islamophobic speech at the University of California. The resolution defined Islamaphobia as “the irrational fear of Islam, Muslims or anything related to the Islamic or Arab cultures and traditions.” Authors stated that it was written due to the concerns for students’ well-being, safety on campus and the administration’s failure to address issues.

During public discussion, some members of the Muslim Student Association (MSA) and other students spoke in support of the resolution. Members of the Ayn Rand Society (ARS), the group that held the April 11 “Islamists Rising” event on campus, spoke in opposition of the resolution. The event held by the ARS, which featured panelists such as author Daniel Pipes, sparked a conversation about freedom of speech on campus and with the administration.

Kriti Garg, an author of the bill and a second-year international relations and community and regional development double major, said the April 11 event was an example of why the resolution was necessary.

“It just so happened that at this time we had very prominent issues focusing on Islamophobia on our campus and … [it] really goes to illustrate that [Islamophobia] happens all the time,” Garg said.

‘Let it be resolved that…’
Senate Resolution 21 was authored by the Ethnic and Cultural Affairs Commission (ECAC) along with several co-authors, including ASUCD Senator Alyson Sagala and ECAC Chair Emmanuel Diaz-Ordaz. According to Garg, it was inspired by a piece of legislation addressing Islamophobia in the UC system that was passed at UC Berkeley on March 20.

The resolution states that the UC system identifies itself as prioritizing campus climate, however, the issue of Islamophobia on campus has created an unwelcoming environment for certain communities. The resolution also addresses the “Islamophobic rhetoric” of UC Santa Cruz lecturer Tammi Rossman-Benjamin and condemns her rhetoric while also urging UC President Mark Yudof to condemn Rossman-Benjamin’s language.

Under the resolution, ASUCD President Carly Sandstrom is to write a letter condemning Rossman-Benjamin’s rhetoric and Yudof’s failure to address the issue. The resolution also urges other campuses to pass similar bills.

“I am a Pakistani American Muslim. I have personally experienced hate speech because of the fact that I am or ‘look’ Muslim. My friends have experienced this,” said Sonum Saeed, a fourth-year psychology major and publicity coordinator for MSA, in an email interview.

Saeed said that last week, one female Muslim student who was wearing a headscarf was spit on.

“Hate speech affects people on a psychological level, and if you’ve ever been told that your existence, your faith or that your ‘brownness’ is the reason for all evil in the world, then you know exactly what I’m talking about,” Saeed said.

Senators, public debate
Senator Miles Thomas, who voted “yes” on the bill, admitted that he originally planned to vote “no.”

Thomas said the fundamental issue with the bill was that much of the language was from the UC Berkeley bill and it would have been more powerful if it was more “Davis specific.”

“Even though all of my concerns with the bill were not addressed, I couldn’t help but vote ‘yes’ just because I do appreciate the severity of the issue,” he said.

Many amendments were made to the resolution and some senators felt that the language of the bill could have been improved.

“I voted against Senate Resolution 21 because I believe it was a poorly-written bill. It was not the proper way to address the conflict that occurred on campus,” said ASUCD Senator Tal Topf in an email interview. “Additionally, the claims that the Ayn Rand society made at the senate meeting were very valid and I did not feel comfortable voting on a bill that would pin students against students.”

Topf was one of four senators who voted against the bill, along with Maxwell Kappes, Felicia Ong and Ryan Wonders. Liam Burke abstained.

“I did not personally support the bill [but that] does not [mean] that I don’t recognize its merits. I had my reasons for voting ‘no’, but if this benefits the Muslim community on campus then I am content that it passed and their voices were heard,” she said.

Third-year political science major Christopher Telfer, who attended the ARS event and was present during discussion of the resolution, also opposed the bill.

“I felt like the Ayn Rand Society, their members and the participants of the forum were being misrepresented. They were not spreading Islamophobia or spewing hateful rhetoric as claimed, and I felt the need to aid in their defense,” Telfer said. “Free speech and open dialogue should be promoted and protected in our society, even if a certain viewpoint is disagreeable or unpopular to a certain group of people.”

Jonathan Bomberg, a fourth-year viticulture and enology double major and president of the ARS, gave the only official ARS statement during the meeting.

“Instead of promoting slander and attacking free speech, you should be promoting discussion of ideas, not its condemnation,” Bomberg said.

Bomberg also stated that the event was not an Islamophobic event against Muslims in general, but against individuals and groups such as Al-Qaeda, who commit terrorist acts in the name of Islam. Moreover, his statement questioned what evidence gave individuals the right to condemn the ARS event if they were not present.

Looking ahead
Garg said she also wants to see concrete action taken by administration to increase awareness and address the issues of Islamophobia.

Usamah Simjee, MSA president and third-year genetics major, is hopeful that this discussion will lead to changes on campus.

“Climate is defined by the community, not by legislation. However, it is very encouraging to see that this problem is at least being acknowledged by our student body,” Simjee said in an email interview. “Seeing this bill bring together so many students of diverse identities is a sign that we are moving in the right direction.”