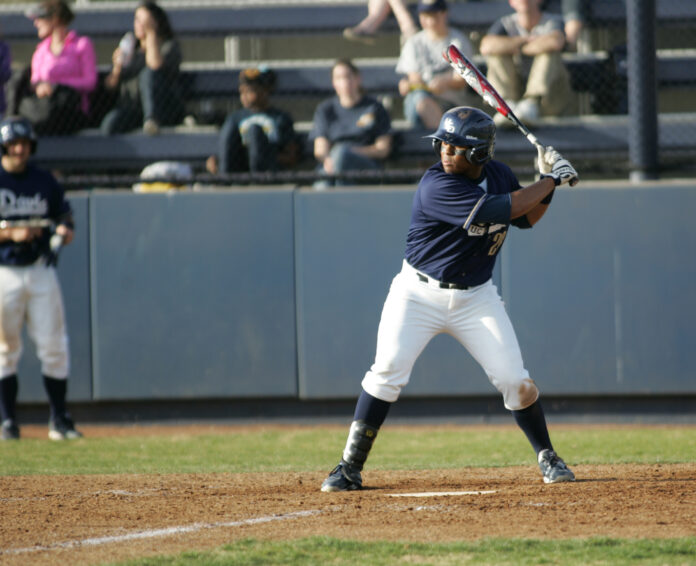 The reason is simple. Despite the inconsistent hitting by the majority of the UC Davis batting order, Lynch is a solid constant. Hitting an outstanding .359 as of the weekend series in Irvine, Lynch has been the most consistent hitter for the Aggies. He is currently third in the conference with his .359 batting average.

Seemingly always on base, with a .455 on-base percentage, he is what the Aggies desperately need. Lynch also has some pop in his bat, having hit two home runs this year and driving in 23 RBI.

With UC Davis on another losing streak, the Aggies will need to find some hitting and pitching to back up the consistent work of Lynch. After all, baseball is a team sport.

Did you know? The last time UC Davis lost the season series to Cal State Northridge was in 2006. Since 2006, the Aggies hold an impressive 14-4 record against the Matadors. While this may not be incredibly relevant for the series this year, as rosters change every year, it is interesting to see the dominance which the Aggies seemingly have in this series every year.

The key to the Aggies’ past success is hitting, along with solid pitching. If UC Davis hopes to win the series this year, they will need the same recipe.

Preview: As the Aggies once again find themselves in the middle of a losing streak, they hope to earn a few wins against a very good Cal State Northridge team and snap the streak. After winning four games in a row, UC Davis has now lost four straight games. Both the pitching and hitting have been inconsistent during this four-game skid.

The Aggies’ batting order has been hit-or-miss this entire season. During the UC Riverside series, they were hitting the ball well and scoring runs. Junior Steven Patterson has had an amazing stretch of games as he had a 10-game hitting streak recently snapped during the series finale in Irvine. He is still hitting .336 with two homers and 27 RBI.

Senior Paul Politi is what many would consider the only true power bat in the lineup. With five home runs this season, two of which came in the 19-8 stomping of UC Riverside, Politi has shown the ability to hit the long ball. Also, his 10 doubles this year are the most on the team.

Politi has been hitting pretty well as of late, with a solid .333 batting average during the UC Irvine series. However, he only drove in one RBI in the three games at Irvine. This may be a reflection on the lack of hits by the rest of the Aggies’ lineup more than Politi’s inability to drive in runs.

UC Davis will not only need consistent hitting, but it will also need to be able to string few solid pitching performances together as well. With a team ERA of 4.78 and a propensity to allow late inning runs, as seen in the weekend series against UC Irvine, the Aggies definitely need to get more productive pitching.

Junior Evan Wolf is probably the best man for the job. With a 2-2 record and a 4.64 ERA, Wolf has been the best starting pitcher this season for UC Davis. In his last start against the Anteaters, Wolf threw six solid innings allowing one run on only two hits. The Aggies hope he can repeat that performance against Cal State Northridge.

Northridge has a solid pitching staff which has a team ERA of 3.87. This staff includes sophomore pitcher Jerry Keel, who is 6-1 this season with a 2.13 ERA. UC Davis will need to be able to find a way to hit against him during the series.

The batting order of the Matadors is a dangerous one. While they only have a team batting average of .265 and no one in the lineup hitting over .300, the Matadors do have some pop in their lineup — especially junior outfielder Miles Williams, who, while batting .221, has seven home runs and 23 RBI. The Aggies’ pitchers will definitely need to be mindful of the dangerous bat of Williams during the series.