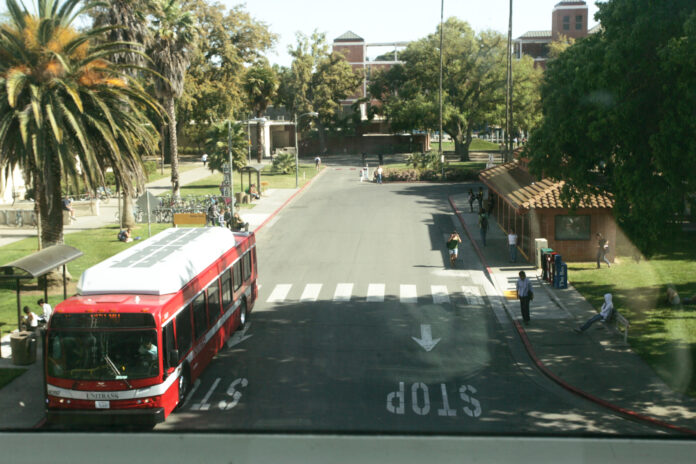 On April 27 from 9 a.m. to noon, the City of Davis hosted an inaugural Travel Training event at the Davis Senior Center, the first in an ongoing series of biannual workshops intended to improve access to local transportation services for the elderly or those with other mobility challenges.

In addition to the biannual workshops, the just-launched Travel Training program will also feature monthly group excursions to various locations to help reinforce the modes of transportation learned at the event and build confidence in a social setting, according to City of Davis transportation planner Brian Abbanat.

Abbanat said that the planning process for the program began in June 2012 while updating the city’s General Plan.

“We had done an online survey inquiring what types of improvements we needed to make to our transportation systems, and one of our senior citizen commissioners said we really needed to have a travel training program for seniors and the disabled,” Abbanat said.

According to Abbanat, the Senior Citizen Commission had previously obtained a $30,000 grant for the entirety of Yolo County to fund individual transit training for seniors, with the greatest demand for such training coming from Davis.

“They put together a small event to raise awareness that people could get one-on-one transit training with the grant, but when the grant funding expired, so did any transportation information specifically for seniors and the disabled,” Abbanat said. “People were really interested but the grant money had run out.”

Abbanat, who was interested in the program from a transportation planning perspective, began looking into conducting a similar program within the staffing of the City of Davis.

“We had to figure out what we could take on without a budget and without exclusive staff, without one person having to take on too much responsibility,” Abbanat said. “I went around and asked Davis Community Transit, Yolobus and Unitrans if they were interested [in being involved], and everybody said yes.”

In transit
The program featured in-class training sessions with a choice of three modules, each providing the 55 participants with the opportunity to gain experience and knowledge regarding different transportation options such as Unitrans, paratransit and biking.

“The bike group had a presentation explaining the difference between different types of bikes and which would be appropriate depending on varying levels of mobility,” Abbanat said. “There were 10 different bikes and [participants] got to test ride them in the parking lot.”

Electric bikes were available to be test ridden — often a promising option for those with mobility issues. Diane Swann, co-owner of Swann Electric Bicycles, presented three electric bikes at the workshop.

“They’re good for general transport because they help in the wind, the hills or the heat. You can get as much of a workout as you want to, but if you don’t want to, you don’t have to,” Swann said. “They’re great for all ages, and if people have a physical infirmity, they’re good for that as well.”

Swann, who commutes to Sacramento from Davis by bike three or more days per week, owns Swann Electric Bikes with her husband John Swann. The business works in a partnership with Ken’s Bike and Ski in Davis, and owns the electric bike inventory sold at Ken’s.

The Davis Community Transit paratransit bus — the paratransit service complementary to Unitrans and Yolobus since 1971 — was also available.

“We’re an Origin-to-Destination paratransit service operated by the City of Davis,” said Linda Alemania, paratransit supervisor for the city. “If a customer is not able to walk to a bus stop, we go to their home, pick them up and take them to the stop.”

Paratransit fare is $2 each way. Passengers must be ADA-certified (Americans with Disabilities Act) and must go through an eligibility process.

“We want to let people know that Davis Community Transit exists, because there are some people that have no idea we even exist,” Alemania said. “A lot of people move here because their families live here, and just to help the families help them — that’s where we come in with transporting them.”

Alemania emphasized that accessible public transportation is key not only for the elderly, but for their families as well. Faced with the reality of parents who are aging or might suffer an unexpected accident, services such as paratransit and transportation workshops can help all generations adapt to a “new normal.”

“Our goal is to maintain independence and our customer’s quality of life,” Alemania said. “We want people to get out, do what they need to do, visit their family, go to church and be as active as possible.”

Fear factor
Unitrans was also present at the workshop to help facilitate practice with such activities.

“Unitrans brought one of their buses to the senior center and they practiced getting on and off, then they all went down to the Farmers Market, stopped at a real bus stop, waited for the bus at a bus stop and got back on the bus,” Abbanat said. “The purpose of this activity is to help them get beyond the fear barrier of taking the bus.”

According to Abbanat, many individuals in this demographic may feel a certain amount of fear about taking public transit due to a variety of reasons.

“The fear element — it’s the fear of the unknown. Maybe they haven’t used a bike in 30 or 40 years. Maybe they don’t know what paratransit is, who runs it or how much it costs. The program is just helping to orient them to these forms of transport in a no-pressure environment,” Abbanat said.

Abbanat emphasized the importance of accessible public transport for seniors and those with mobility challenges, particularly for those who no longer drive. Many individuals, unable to drive yet unsure about what transportation options are available to them, may face challenges running errands or attending medical appointments. Others may feel isolated from friends, family and the wider community if they’re lacking the confidence and knowledge needed to navigate public transport.

“A lot of seniors and those with disabilities don’t know if they can physically even get on a bus — they don’t know the bus can lower down or that paratransit buses have a lift. Many bikes, including electric assist bikes, make it easier to get around town without a car. Even if they can step into a bus, this [program] gives them a chance to make sure they can do it and feel comfortable,” Abbanat said. “The step they have to take is very small.”

Potential for expansion
While the next event is planned for October, the program also featured the opportunity to sign up for monthly excursions, along with a survey.

“We surveyed the participants to get some baseline information, and in four to six months we’ll follow up to see if they’re using any transport options more often. Then we can quantify the program and see if it meets the needs of that demographic,” Abbanat said. “At the end of March we applied for a $20,000 grant from the U.S. Administration for Community Living that will allow us to judge the effectiveness of the program and expand it as well.”

Abbanat mentioned that a frequent request is a bus or shuttle route going directly to the Mondavi Center, perhaps circulating by the senior housing complexes. Other ideas on the horizon include a possible “medi-ride” program, in which volunteers would take seniors to and from medical appointments.

“We know there are still some gaps to fill to help seniors, and to the extent applicable, those with disabilities, to transition to public transit. We’re hoping to expand into individual, one-on-one programs. A volunteer will basically do the trip with them for the first time or two so they feel comfortable and confident doing it on their own. That really opens up a lot of destinations for them and allows them to stay connected,” Abbanat said. “There’s a lot of work to be done, but we’re off to a great start.”