Get naked for charity 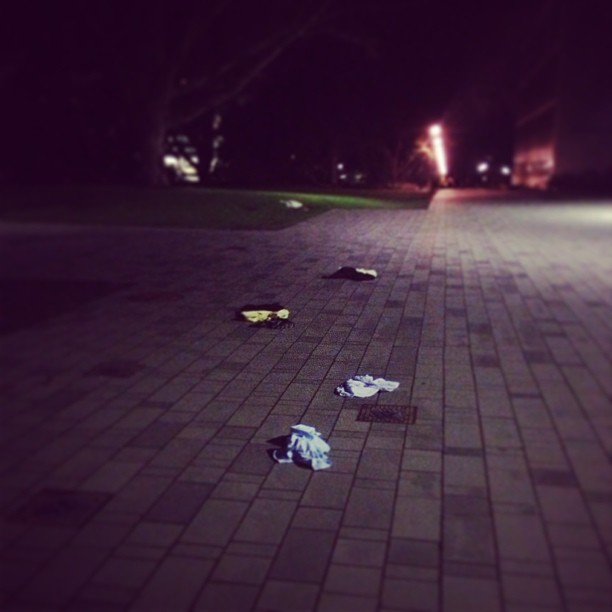 Andrew Nelson, a third-year psychology major, looks up from his study materials at 11:50 p.m., pulls on gray dress pants and an old T-shirt and dashes to the MU. He mills about the flagpole with a few others until a giant crowd appears, then strips down to his navy blue and green skivvies. He throws his clothes onto the ever-growing pile, which will all later go to charity. As the clock tower chimes for midnight, Nelson and a few hundred other college students race by in a blur of skin and spandex for yet another triumphant year.

Nelson is just one of the hundreds of participants in the UCD Undie Run. Leader Leslie Sherrett, a fourth-year environmental science and psychology double major, described the event as part charitable effort, part rebellious college experience.

“I love everything about it. It’s a healthy way to relieve stress during finals,” Sherret said. “It’s for a good cause — I’ve collected and donated about 100 bags of clothes so far. It’s just amazing.”

Once the clock strikes midnight, anyone in any stage of undress begins the mad dash across campus.

The event is independently organized by Sherrett, who not only facilitates the online community and distributes flyers in the weeks preceding the run, but cuts her own run short and returns to bag the donations.

“People are pretty generous. They’ll layer jackets or sundresses — nice clothes,” Sherrett said, “I load up my car [with the clothes] and drive them over to either the Yolo County SPCA or the Sacramento Food Bank.”

Sherrett has been responsible for organizing the event since her freshman year.

“Someone in the dorms made a Facebook group for an Undie Run, but there was no real organization behind it. I took the extra clothes that people didn’t retrieve and donated them, and I thought, this is such a great idea, I’ll start this on my own next quarter,” Sherrett said.

Sherrett soon found that the interest behind future Undie Runs was more than originally expected.

“I had never done any event planning before, so when 2,000 people ended up attending on [the] Facebook group that first year, I went, ‘Oh my gosh, do I need to tell the police, do I need to inform the Chancellor?’”

Ultimately, the event was not a problem with administration. Undie runs have been met with similar enthusiasm among students throughout California schools: UC Davis is one of many, with undie runs occurring at UC Berkeley, San Diego State University and UC Santa Cruz.

Nelson suspects that there is a psychological, if not primal fascination with running half-naked in the dark.

“For one, it’s sexy,” Nelson said. “You don’t get to usually do that kind of thing. It’s radical and different. People donate clothes and see the bigger picture, but the draw is the breaking of a societal norm.”

The organic qualities don’t end there. Although Sherrett has made paths and signs to direct runners in the past, she finds that mob mentality reigns.

“When there’s that many people, it’s impossible to direct. It just naturally flows,” Sherret said. “If I made a route, nobody would follow it. It becomes its own little organism. People run down Russell or storm the dorms; sometimes if there are really gung-ho people, they’ll go downtown.”

The distance of the run is based off of personal fitness level, desire to stay out in the cold or need to get back to studying for finals. Second-year animal science majors Melissa Tye and Kimberly Ruble found that even when leaving earlier than the rest of the pack, the experience is still worthwhile.

“We only ran for about half an hour, but it was so fun,” Tye said. “We went all over the place: through the Quad, the library, [the] Silo [and] Tercero. I think the group we were originally with with ended up going eight miles in total that night.”

Although Tye and Ruble did not stay for the entire run, they were able to participate in its most anticipated tradition. After passing Centennial Walk at the beginning of the run, the pack makes its way to Shields Library, where the group runs through all floors and rooms, momentarily bringing some excitement to those studying for finals.

“In the light, in the brightness of the library, it didn’t phase me that I was in my underwear. Once things took off, I had no concern for embarrassment. I felt free,” Nelson said.

The library run wasn’t always well received by campus officials, but in past years, responsible undie runners have allowed for the tradition to continue.

“The people at the library are becoming more understanding. It’s just students running around and blowing off steam. At first they would call the cops, bar the doors, or kick us out, but now [police officers] wait outside. They are just making sure we’re being safe,” Sherrett said.

Although the event is recognized as harmless, campus police now post out front of the library and follow the pack of students via patrol cars for part of the run. They make sure, however, not to rain on the parade, providing lighting and safety.

Participants were quick to point out that anyone is welcome at the Undie Run, regardless of fitness level or body type.

“It helps you become more comfortable with your body. It’s about bringing the community together. You can be big or small; it’s not about looks or fitness, it’s about celebrating the end of the quarter,” said second-year Spanish and chemistry double major Dezy Jordan.

With Sherrett graduating in the spring, leadership of the event has been passed down to Jordan, who has high hopes for the future of the Undie Run.

“I’d like to get DJs out more often and organize after-run events,” Jordan said. “I’m also going to poll using the Facebook group to see what day of finals has the least amount of conflicts for people.”

HANNAH KRAMER can be reached at features@theaggie.org