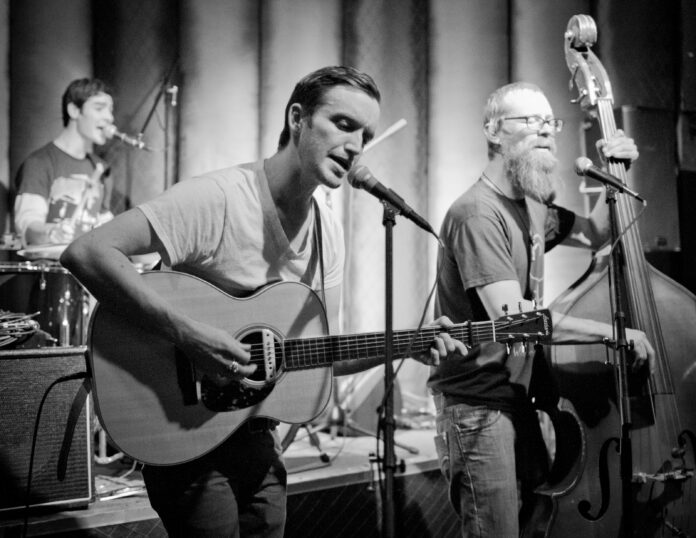 Playing a hybrid mix of folk-rock, bluegrass and country, The McCoy Tyler Band is a Santa Cruz-based trio who will perform at Whole Earth Festival and live on air on KDVS 90.3 FM.

The band is rooted in folk tradition, but McCoy Tyler, Clinton Brown and Chad Bowen add their unique musical perspectives to arrange progressive-yet-rootsy tunes. After having released their first full-length album in 2012, Cabin Fever Blues, the trio has been performing around the Bay Area, Sacramento, Tahoe and Oregon.

MUSE was able to speak with Tyler, vocals and guitar and Brown, vocals and drums, in a phone interview, discussing their beginnings as a band, their musical influences and the unique style they bring to the traditional genre.

MUSE: How did your band first take shape?
Tyler: About two years ago, I wrote a bunch of songs, and I was looking for a band. I went on Craigslist seeking musicians, and Clinton and Chad were the first to respond. When we met, I explained the music, and we got a feel for one another and it turned out to be a great match. Since then, we’ve been making music and performing around California, and we recently went on our first out-of-state tour up in Oregon with the release of our first full-length album.

How would you describe your music?
Tyler: There are a lot of styles that we bring into our music — bluegrass and folk traditions that haven’t changed a whole lot while they’ve been around, and we bring a modern twist to that. Because of the genre of music we’re in, our music has a bit of an old-school traditional feel, but we modernize it with our lyrics and our somewhat more complex chords.

Brown: Playing with these guys for the past few years has taken me into a new perspective on music itself, and I’m able to incorporate styles of music I’ve played in the past into traditional bluegrass. We each take turns bringing our individual perspectives while we’re working on a new song, and flesh things out with different accents, so you’ll be able to hear what each individual brings to the table.

Who are your biggest musical influences?
Tyler: If I had to name a few, I’d say John Prine, Gram Parsons, Neil Young and John Hiatt. They all utilize basic, stripped-down chord structures, but the stuff we write tends to be more complex. Part of that has to do with the background we come from. Three of us come from very different musical backgrounds. When we come together it creates a unique mix of styles, which sets us apart from the traditional folk-country vein.

What kind of music experience did you have before creating the McCoy Tyler Band?
Brown: I played drums for a band in Sacramento, a jam-rock funk band, playing gigs at bars on weekends, and I learned to love to play live shows. I listened to all types of music, but I think in terms of playing I was looking for something a little easier on the ears, something to play for people in smaller settings, not blaring people’s ears out. I wanted to play something simpler on the drums in order to be able to sing at the same time, and this band is a great outlet for that.

Tyler: I played a lot of “loud” music when I was 18. I was lead guitarist in a glam rock/metal band, a similar style to Iron Maiden and Judas Priest. I was playing really fast-treading metal songs, and now my style has changed and gone in a different direction. I think part of what influenced that shift was going through my parents’ records and listening to a lot of folk music. There’s something about the stripped-down quality about it that I appreciate. The difference between playing electric and acoustic is that you can’t really hide anything — it exists in a really immediate world where you can hear everything you’re playing in a solo.

What gigs do you have lined up for the near future?
Tyler: This year is going to be a breakthrough year for us. I wanted to get as many festivals as I could, so we’ve really made a point to book a lot of good regional festivals in California, and we’re touring through several western states starting in mid-June.

Brown: For the more distant future, we just hope to book bigger festivals and tours and record more albums. We want to keep it fun, keep it loose and have a good time playing music.

For more information about The McCoy Tyler Band, visit mccoytylerband.com. Listen to the band on KDVS 90.3 FM on May 9 at 11 p.m., and watch the show on the Solar Dance Stage at Whole Earth Festival on May 10 at 8 p.m.