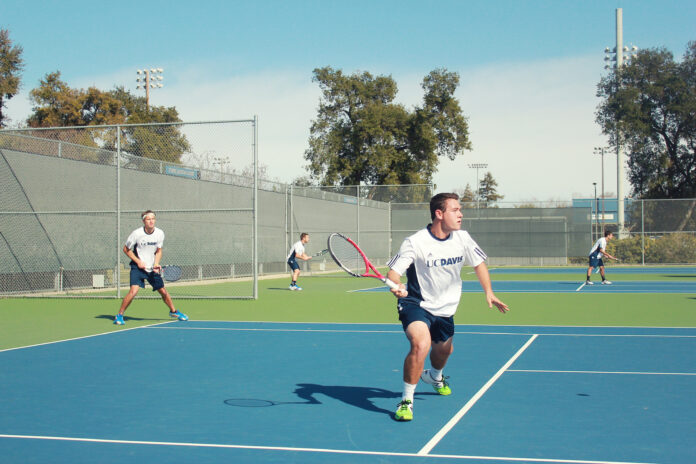 Just as the conditions, weather and the UC Davis tennis teams were reaching their peak, their seasons ended abruptly.

The UC Davis men’s and women’s tennis teams competed in the Big West Conference Championships down at the Indian Wells Tennis Garden from April 25 to 26 after brutal winds riddled their past week of practice.

The men’s team exited after their first-round loss to Pacific, the eventual finalists in the Big West tournament. The Aggies fought hard but were only able to muster up a 4-2 defeat at the hands of the Tigers.

UC Davis continued its strong play in doubles with wins at the first and third spots, both of which went to tiebreakers. Freshman Brett Bacharach and junior Parker Kelley took down their opponents 9-8 at the No. 3 doubles before senior Toki Sherbakov and freshman Adam Levie pulled out their 9-8 win in the top slot to give the Aggies the doubles point.

Up 1-0 going into singles competition, UC Davis couldn’t carry over the victories to singles play. Pacific reeled off two singles wins over junior Kyle Miller and senior Hugo Verdi-Fortin at the second and fifth singles positions, respectively, to give the Tigers the 2-1 advantage.

Senior George Horowitz leveled the score with a 6-3, 6-4 win from six singles, but that was all the Aggies could muster.

Sherbakov, in his final college match with UC Davis, did not finish his match, as Pacific had already grabbed the victory over the Aggies with their four singles wins.

Sherbakov, Verdi-Fortin and Horowitz all close their careers with the Aggies. Sherbakov was a mainstay at the top of the Aggies’ lineup, playing No. 2 for his first two years at UC Davis, then held down the top spot for his final two years.

The women met a similar fate at the Big West Championships, falling in the quarterfinals to eventual tournament champion, 45th-ranked Long Beach State.

UC Davis fell to the 49ers 6-1 the last time they matched up at Marya Welch Tennis Center earlier in April, and it would have taken a lot of things to fall into place for the Aggies to upset the conference’s second seed.

UC Davis lost the doubles point and then dropped the first three singles matches in the quarterfinal matchup that ended its season.

The Aggies won their previous match in convincing fashion over UC Riverside 4-0. UC Davis had finishes from their bottom-three singles slots this time, with sweeps from juniors Melissa Kobayakawa, Nicole Koehly and freshman Tiffany Pham.

UC Davis was held up by strong performances from the bottom of their lineup this year. Looking at Kobayakawa’s 16-6 dual match record, ranging from the third to the sixth spots and Koehly’s 13-5 ledgers down at the fifth and sixth singles positions, the Aggies had considerable contributions from this pair of juniors.

The Aggies will lose the services of Edles, Curry and Zoe Davidson. Edles and Curry have had substantial impacts on the program ever since they came as freshmen.

Edles, whose career has been riddled with injuries, played up and down throughout the lineup and could put together wins at any position during her years, while Curry made a slow progression up in the singles positions as time went on.

The duo played doubles together for much of their careers despite some shuffling of the lineup.

As the season comes to a close, UC Davis tennis will welcome a renovated tennis center next year and will hope to build on the success it has begun to foster, with a strong senior class to come.

MATTHEW YUEN can be reached at sports@theaggie.org.