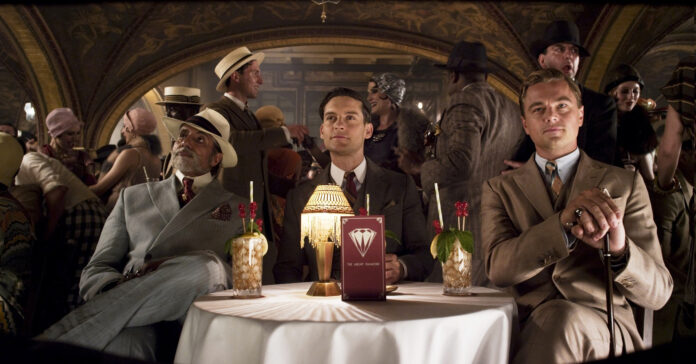 Like Van Gogh’s paintings or the female anatomy, I don’t fully understand The Great Gatsby — they’re all pretty, confusing and taught in my 10th grade curriculum. Unlike the first two, however, I had the chance to see Baz Luhrmann’s newest adaptation of F. Scott Fitzgerald’s classic novel in person at an advanced screening this week.

Well, they say the first time is always painful.

When Fitzgerald completed his literary masterpiece in 1925, he probably didn’t envision a cinematic rendition featuring Jay-Z with a giant BeDazzler. But such is Luhrmann’s style, boldly blending lavish modernity into vintage material, often to beautiful cinematic and financial success. Like polishing old silver, Luhrmann demonstrated a flair for buffing out beloved classics with shiny lights and popular songs with hits like Moulin Rouge! and Romeo and Juliet.

This time around, however, the brilliance of the source material is coated by too thick a layer of polish, murking the story’s power and message with a beautiful, gloopy veneer.

Every student should know the plot of Gatsby from high school English. The film pulls most of its dialogue straight from the text, and follows the plot almost true to form, with only a few liberties taken for cinematic purposes.

Fitzgerald’s motley crew of soulless characters are impeccably cast. Leonardo DiCaprio pulls off a perfect Jay Gatsby, hungry for vindication and success. You can feel his drive, frustration and deflated ego with every determined smile — but then again, DiCaprio has yet to win an Oscar. He is Jay Gatsby.

Tobey Maguire fits the narrator and lonely protagonist Nick Carraway with ease, with the ability to both frolic in the lavishness of Luhrmann’s ridiculousness and distance himself from the debauchery of his peers. But then again, he’s the crying Spider-Man meme. He is Nick Carraway.

Carey Mulligan is absolutely hateable as the illustrious and ethereal Daisy Buchanan, which is a testament to her acting ability. She actually makes you loathe her angelic, somber face as she ruins the lives of everyone around her with grace and reserve.

Joel Edgerton delivers a standout performance as scumbag husband Tom Buchanan, staring down our lovable Leo with mannish swagger and a pure confidence that only money or muscle can instill. Buchanan came from money. Edgerton was totally ripped in Warrior. It works.

Other notable performances include Jason Clarke (who is used to playing the crazy rage card) as the tragic murderer George Wilson, Elizabeth Debicki as gossip-girl Jordan Baker and a delightful surprise with Bollywood superstar Amitabh Bachchan as grizzled gangster Meyer Wolfsheim.

Despite a form-fitting cast and solid acting, the actors lose themselves in the grandeur of Luhrmann’s visual imagination and the film’s jumpy pacing. The plot, tense and natural in the book, seems inorganic and sloppily pieced together in between “Fergalicious” party scenes filled with glitter and champagne. It seems Luhrmann only had fun filming the grandiose aspect of the book without bothering to capture the sadness behind it.

Another terrible misfire was letting superstar Jay-Z pick the soundtrack for the film, which includes pieces from Florence + the Machine, Lana del Rey, Jack White, Fergie, Beyoncé, Emeli Sandé and the numerous tracks from the trigger-man himself.

Yes, many of the artists featured on the soundtrack are wonderful. But their songs are crudely thrown into the film without any attempt to blend into the actual era, or into the film itself. Florence’s brilliant track gets about 20 seconds of playtime and is too quiet to hear for the majority of its short-lived appearance. Sandé joins the lavish party only to sing a Beyoncé tune. Beyoncé sings Amy Winehouse. Fergie peed on stage in 2005. Why does nobody remember this?

People will either flock to this film to see Leonardo DiCaprio smile at the camera or because they absolutely love the book. For everyone in between, there’s not much enjoyment to be had.

In the end, The Great Gatsby remains a novel fully appreciated by aged readers and youthful fringe fanatics. Thus, while Luhrmann’s film takes the work in fantastical new directions cinematically, it accomplishes little for the story.

ADAM KHAN will now call people “old sport” on the regular. Chastise him for his jazzy soul at features@theaggie.org.