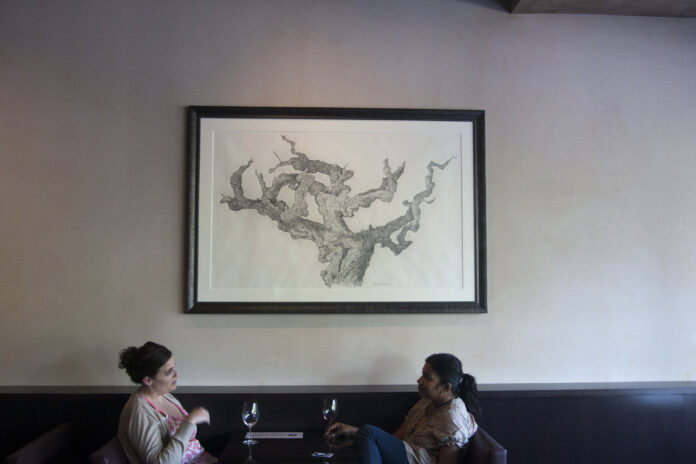 Art manifests itself in many forms, as it marvels our every sense through its effect on touch, hearing, smell, sight and taste. Art especially attests to the beauty of its execution when it can move us by combining its effect on a multiplicity of these senses simultaneously — especially the last two.

As the art of dining has become a more popular form of artistic entertainment than attending museums, it has resulted in a fusion of the two forms of aesthetic and sensory expression. We see this practice trending everywhere, from the ritziest up-scale restaurants to quotidian cafés, as many have started to showcase local artists’ works as rotating exhibits or as works for sale. This form of artistic expression has even been executed in Davis, in local restaurants and cafés such as Vini Wine Bar and Mishka’s Café.

At Mishka’s Café on Second and E streets in downtown, owner Sinisa Novakovic has made it a routine to have different artists exhibited on his café’s walls monthly.

“Local artists come in and offer their works to be either advertised for sale or simply just to add to the atmosphere,” said Lola Quasebarth, a Mishka’s employee and second-year sustainable agriculture major.

Directly across the street stands the new local wine bar, Vini. The only one of its kind in Davis, it offers an array of wines from around the world, ranging from South Africa to California.

Owner and Davis local Jeff Day opened the wine bar in July of last year, and since then has been meticulously looking for artwork to complement the jazzy atmosphere. So far he’s decorated walls with jazz album covers, featuring classics like Thelonius Monk and others.

Day was also fortunate enough to have been able to ask one of his long-time friends Michael Stevenson to create some of the artwork for the restaurant.

“I asked him if he thought he could create some pieces to go with the jazzy theme of the restaurant, and I’ve been really happy with what he’s come up with. I thought both works turned out to be a perfect fit for what feel I was trying to go for. The pieces complement the room, atmosphere, crowd, everything perfectly,” Day said.

Stevenson graduated from UC Davis with a degree in design and has since pursued his career in the arts, involving himself in the construction of the new Jan Shrem and Maria Manetti Shrem Museum of Art.

In particular, he produced two of the works inside of Vini that line the left wall. His first work is a mixed media, cross-hatched print done with acrylic, watercolor and pencil, titled “Thelonious Monk.”

Stevenson also created a cross-hatched pencil print, titled “Old Vine,” which perfectly blends the jazz-themed decorations with the subdued ambiance, rooting us back to the reason we’re here: wine.

“Growing up in Tennessee, we didn’t have anything like we have in California. When I moved out here, I was completely taken with California,” Stevenson said, when asked about the inspiration behind the piece. “You can’t imagine California without the wine. Old music. Old wine. That’s what put California on the map.”

Many other locations in Davis showcase artistic talent besides Mishka’s and Vini. Among the various statues and sculptures scattered around outside are unique pieces hidden in local cafés.