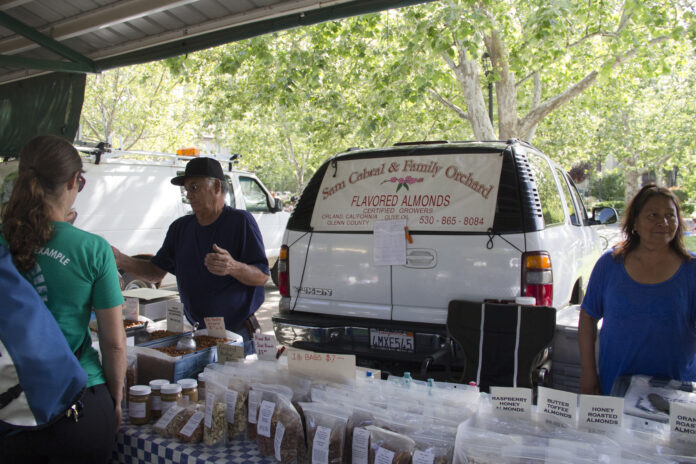 Every Wednesday evening and Saturday night, Davis residents flock to downtown Davis for the Davis Farmers Market. The market is located at Central Park between Fourth and D Streets. It is a beloved tradition for the City of Davis and is known for selling various types of food and drink.

People of all ages attend to try naanwiches from Raja’s Tandoor, hot dogs and lemonade from The Hotdogger, Fat Face popsicles and many other diverse dishes.

Vendors from Davis and the surrounding areas set up stalls to sell their various produce and goods. In addition to the numerous stalls of fresh fruits and veggies, certain vendors sell wine, almonds, honey and breads.

The Aggie profiled the most popular and unique vendors from the Farmers Market and asked them what motivates them to continue coming back.

“I love the energy of the people [at the market],” Woody said. “[The food is] visually pleasing and very nutritious.”

Heringer Estates: Family Vineyards and Winery
Heringer Estates is a family-owned winery and vineyard located in Clarksburg. They have been attending the Saturday Farmers Market for the past three years and just recently started at the Wednesday market.

Cara Manich, Farmers Market coordinator for Heringer Estates, said the winery sells a bottle called Hope’s Thread which benefits breast cancer awareness. Ten percent of the proceeds from each bottle goes to “Lump to Laughter,” a ministry that provides support and raises awareness of breast cancer.

Additionally, they are known for being a sustainable winery and vineyard.

“We have a bottle called the Eco Flask,” Manich said. “It’s a refillable red wine that we produce sustainably, and each time you refill the bottle, you get a discount.”

Owner Sam Cabral said they have eight different varieties, but they only sell three in the market.

While many attend the Davis Farmers Market for the fresh, local goods and produce, they also keep coming back for the wide variety of food served. Local restaurants set up stalls and sell their most popular dishes.

The Hotdogger
As a hole in the wall restaurant on E Street, it’s easy to miss The Hotdogger amid all the other restaurants nearby in downtown Davis. However, at the Davis Farmers Market, The Hotdogger often has one of the longest lines. People can be heard praising their food every week.

In addition to their diverse hotdog menu, which features a veggie dog and corn dogs as well, they are known for their lemonade. In the hot spring and summer months, this is a favorite among Davis residents who attend the market.

Raja’s Tandoor
Another crowd favorite are the naanwiches from Raja’s Tandoor. Raja’s is conveniently located right off the UC Davis campus at 207 Third Street. and is a student favorite.

On both Wednesdays and Saturdays, their naanwiches are among the most popular items at the Farmers Market. They have two vegetarian varieties, chickpea and cauliflower, in addition to the chicken naanwiches.

Sugar Daddies
Sugar Daddies, located at 113 E Street, is present at the Wednesday market serving Davis Creamery ice cream. This is their second year at the Farmers Market as Sugar Daddies. They usually have about four flavors for customers to choose from.

It is a nonprofit organization that provides programs that can improve social and economic conditions for women and girls. They have a stall at the Davis Farmers Market selling wine and beer to raise money for their organization.

They are in collaboration with Sudwerk and serve beer from their brewery.

Crystal O’Hara, a member of Soroptomist International of Davis, said they have been attending the Wednesday Farmers Market for about 15 years and the money they make helps create grants for local organizations relating to women’s social and economic health.

The Saturday market is from 8 a.m. to 1 p.m all year. From March to October, the Wednesday market is called Picnic in the Park and is from 4:30 to 8:30 p.m. During the winter months, it is from 2 to 6 p.m. Additionally, the UC Davis Farmers Market is located at the Silo during the Fall and Spring quarters.