Eating on a budget in downtown Davis 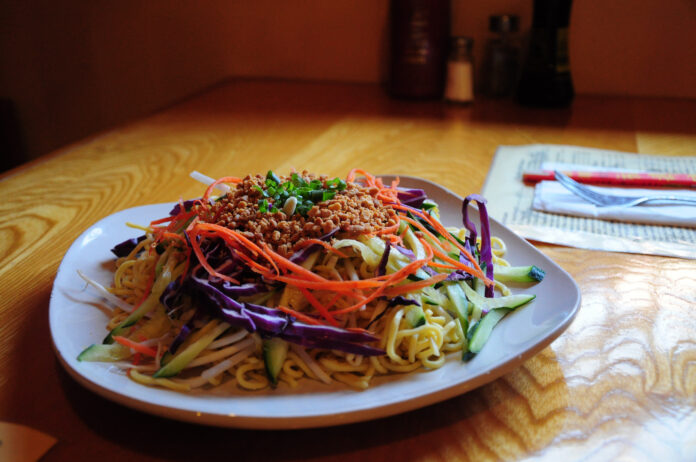 While many fellow college students would consider themselves to be broke, this stigma doesn’t mean your dining experience has to suffer. The City of Davis has many authentic, economical places for students to eat off campus that fit a wide range of tastes.

The following restaurants are all located in downtown Davis, locally owned and offer lunch for under $7, while some even offer dinner for less than $7 as well.

For the student looking for more traditional American cuisine, The Hotdogger on E Street is a great choice. The restaurant has been open for 30 years and under the management of its current owners for the past 20 years.

Cheryl Frank, the owner of The Hotdogger, purchased the restaurant 20 years ago from a friend, and now serves a variety of old-fashioned hot dogs that suit many different taste buds.

“Our hot dogs are made with real meat, and we offer vegan hot dogs as well as hot dogs made of chicken sausage. [We] have a huge variety of toppings,” Frank said.

The Hotdogger can also be found at the Davis Farmers Market on Wednesdays and Saturdays, with fresh-cut garlic fries available on Wednesdays. Classic hot dogs start at $4 and can increase up to $6 for the most decorated dogs.

Dot Island Grill, on Second Street, offers fresh fish to patrons daily. They have specials from Sunday to Thursday that feature items such as the Grilled Fish Wrap, Chicken Katsu and the Salmon Bowl.

Dot Island Grill offers a healthy approach to dining out, as most of their dishes come with steamed vegetables and rice. Their weekly specials range between $5 and $6, while their regular priced entrees cost about $9.

If you’re after Chinese-style dumplings, look no further than the Dumpling House on E Street. The Dumpling House has been open for eight years, and approximately 2,000 to 3,000 dumplings are handmade in the restaurant each day.

“We give 12 dumplings per order while other restaurants normally only give six. We also have more than just pork dumplings — we make chicken, seafood, beef, vegetable and kimchi pork as well,” said owner Linda Liu, who can be found at the entrance of the restaurant making dumplings.

An order of dumplings costs $6.99, while the other entrees range from $4 to $9. The Dumpling House also serves London-style fish and chips.

Located next to the Dumpling House is Davis Noodle City, which is also owned by Liu.

“I have been all around China, Hong Kong, Japan and Taiwan when I realized that we didn’t have a noodle shop in Davis. Every town needs a noodle shop,” said Liu, who is originally from Taiwan.

Davis Noodle City has been serving Davis residents Chinese noodles for the past 11 years. In addition to noodles in broth, they also offer a wide variety of chow mein and fried rice. Their entrees range from $6 to $8 for lunch.

Also available for Chinese dining in Davis is Open Rice Kitchen on G Street, which has been open for a little over a year. They serve dim sum, soup, noodles and fried rice all for less than $7. Their “over rice” option consists of your choice of sauce and protein over rice.

If you’re out and about for lunch, consider stopping by Raja’s Tandoor on Third Street for their all-you-can-eat lunch buffet. For $5.95 plus tax, you can eat your fill of Indian food that comes with vegan naan bread. Their food is made peanut-free and with limited amounts of oil.

“We really focus on making healthy food that is fresh for every order,” said owner Taranbir Chowdhury. The restaurant has been open for 10 years and has a variety of vegan and non-vegan entrees priced between $7 and $9 and that are available for purchase with Aggie Cash.

Also on Third Street is Sam’s Mediterranean Cuisine. They have been open since 1995 and serve Mediterranean fare such as shawarma and kabobs, as well as turkey burgers and cheeseburgers.

Sam’s also features a vegetarian menu that has falafel, hummus and a Greek veggie sandwich. They have a daily special available from 11 a.m. to 3 p.m. Monday to Friday, and they serve baklava as well. The restaurant accepts cash only and prices run between $5 and $7.

Near Sam’s is Ali Baba, a Persian restaurant with a diverse menu. They serve gyros and kabobs, as well as hamburgers and cheeseburgers, sandwiches, breakfast omelets and breakfast burritos.

“Our menu is very versatile, so it’s a good place to go with large groups and lots of friends. [We] can customize orders to find something for everyone,” said Ai Phi, a cashier at Ali Baba.

The restaurant has been under its current management for the past five years and has a daily special Monday through Friday for under $6, while regularly priced menu items cost between $5 for a gyro and $11 for a salmon platter that comes with a side of your choice.

If you’re downtown between 11 a.m. and 3 p.m., be sure to stop into the pizza place, Woodstock’s, for one of their four lunch specials, which vary from $4 to $7. Woodstock’s has been open in Davis since 1986, and has seven other locations near college campuses in California.

The initial planning for Woodstock’s was done by Chuck Woodstock and Mike Chew; however, before the restaurant was set to be opened, the two men died in a plane crash. They had already hired a general manager who then opened the restaurant.

Sunrise Restaurant on G Street has been a favorite place to go for Vietnamese food in Davis for the past nine years. They offer Vietnamese sandwiches and entrees for approximately $6, as well as a wide selection of shakes, tea and other beverages.

“[We have attracted] people of all nationalities in to try Vietnamese food,” said Sunrise Restaurant owner Hao Au.

If you’re interested in locally sourced food, Delta of Venus on B Street is a great fit. They have been open since 1993, and have a relaxed vibe that is popular in Davis.

They offer full and half-sized sandwiches and soup, as well as a variety of salads and bagels at lunch. They are also open for breakfast and offer traditional Caribbean cuisine for dinner on weekdays.

Lunch costs upwards of $6 for a full sandwich, while breakfast costs about $8 and dinner is available for between $10 and $15.

For those with the occasional late night food cravings, many of these restaurants also offer extended hours.