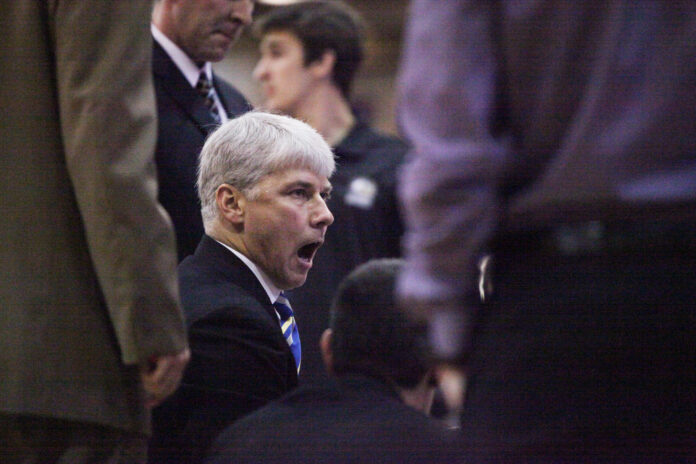 An NBA journeyman with a deadly accurate jumper and a throwback hairstyle, Jim Les had one shot at record-book immortality. The shot didn’t come in the NBA Finals, though, or even in an NBA game. Instead, it came in the 1992 Three-Point Shootout at the NBA’s All-Star weekend.

Les, a backup point guard for the Sacramento Kings at the time, was up against two-time defending champion Craig Hodges in the final round of the contest. With the last seconds ticking away, Les was left with a corner-three for the win. Back iron and out. Les toppled over, the grin on his face clear for all to see.

Now, 21 years later, Les is drawing on his years of experience as he resurrects a university basketball program that is just a few exits down the interstate from the Sacramento arena where he played most of his NBA career. In his second season as head coach at UC Davis, Les led the Aggies to their most wins as a Division I program, finishing the season with a 14-17 record.

“[The most important thing] is building a foundation of the program [and] we’re in the midst of that right now,” Les said. “We’re building a foundation with really good young men who are working hard, getting better and buying into the goal of making UC Davis basketball relevant not only on this campus, but nationwide.”

Nationwide relevancy is a lofty goal for a program that has never had a .500 record at the Division I level, but Les is used to doing more with less.

As a 5’11” point guard, Les dished out 884 assists in a prolific college career that started at Cleveland State and finished with a perfect conference record in his final season at Bradley University. NBA scouts took notice, and Les was drafted by the Atlanta Hawks in the third round of the 1986 NBA draft.

Despite never becoming a starter in the league, Les absorbed all he could during his seven-year career in the NBA.

“I played in a [special] era,” Les said. “It was Jordan, Bird, Magic. I played with John Stockton [and] Karl Malone. I was exposed to a lot of greatness within the sport and tried to take as much as I could.”

What Les lacked in raw athleticism he made up for in shooting ability.

“I was in a situation where I couldn’t take any shortcuts because of the limited size and talents I had. I [needed] … to be a step ahead of people mentally in order to play at the same stage as they were,” he said.

The backup point guard led the league in three-point percentage during the 1990-91 season, connecting on a deadly 46 percent of his attempts from behind the arc.

“I spent a majority of my time there just trying to talk to guys about how they hone their craft and what do they do to work on their shooting and get better,” Les said. “It was amazing … success leaves clues. Those guys left me a lot of clues in my conversations with them about how they developed into shooters. Those are all things that I carry with me as a coach now to provide to my student athletes.”

The following year, he was invited to participate in All-Star Weekend.

In addition to the tips he picked up from his peers, Les draws on the knowledge he gained while playing for multiple hall-of-fame coaches. Les played for the legendary Jerry Sloan in Utah and later for Lenny Wilkens with the Atlanta Hawks.

Those two coaches are ranked No. 4 and No. 2 in all-time wins as an NBA coach, respectively. His coach for four years with the Sacramento Kings was Dick Motta, who is the 10th winningest coach in NBA history.

Playing point guard for those men had a deep impact on Les’ coaching philosophy.

“As the point guard trying to be the coach on the floor, I had to be a student of the game and I thought those [coaches] were really instrumental in helping me understand the mental aspect and improving my IQ for the game,” Les said.

Not all of Les’ professional experience comes from his playing career, though. His first coaching job came just four years after his NBA retirement, when he signed on as an assistant with the WNBA’s Sacramento Monarchs. A few years later, in 2002, Les was hired as the head coach at his alma mater, Bradley University. The coach made quick work of turning around the program, going from 12 wins in 2003 to 22 wins in 2006. That 2006 season was capped with a Cinderella run in the NCAA tournament, when the 13th-seeded Braves knocked off No. 1 Memphis to reach the Sweet 16.

“You develop [your coaching philosophy] based on the people you’ve been touched by,” Les said. “I feel my greatest strength now coaching young people is that I picked up this wisdom and knowledge from some really good people.”

Now, Les is leading the revival — or maybe the birth — of the Aggies’ basketball program. After a very difficult first season under the new regime, the Aggies were on the right track in 2013.

And Les is ready to continue the growth. Next season’s Aggie roster will return 85 percent of its scoring from this year and will add depth with a formidable combination of up-and-coming talent and impressive freshman recruits.

“I feel fortunate to be here and recruit young men to this unbelievable university and this environment which I think is bar none one of the best in the country,” Les said. “Now it’s a matter of getting kids in here and working them and developing them and using my past knowledge and experiences to develop basketball program that sheds a really positive light on the university.”

Under coach Les, the Aggies have already seen a rise in national prominence. The defining moment of the 2013 season came in March, when more than 5,000 students and fans packed the UC Davis Pavilion to capacity for a nationally televised game against Long Beach State.

The gym was as loud as it has ever been, and the Aggies battled end-to-end against the reigning Big West Conference champions. The Aggies were down by one with just seconds remaining when the ball found senior Paolo Mancasola in the corner.

The potential game-winning shot bounced off the back rim and out, a heartbreaking loss in the best game of basketball the Pavilion had seen in decades.

Jim Les knows that feeling. It’s happened to him before. And he knows how to learn from it, to keep working and building, never taking shortcuts. It’s all part of building a basketball program, something he does every day.

CAELUM SHOVE can be reached sports@theaggie.org.