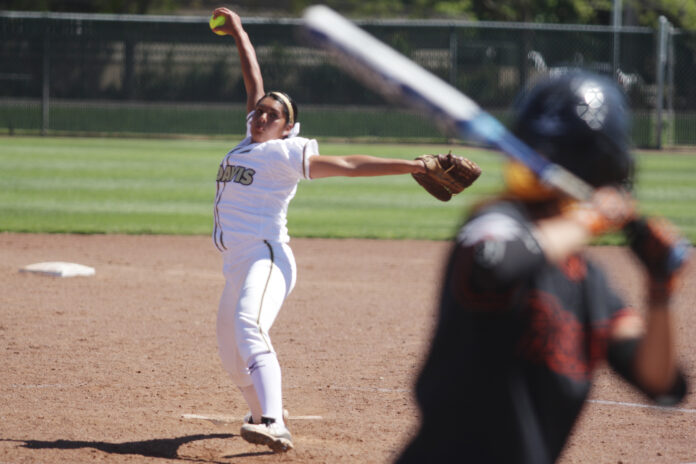 The faint echoes of cheering and discarded sunflower seeds are all that remain on the now empty La Rue Field, which hosted its last series of the 2013 season this past weekend against Cal Poly. In the world of UC Davis spring sports, softball has now come to a close. Although the team went through some ups and downs this year, they can be proud of finishing off strong, sweeping the Mustangs in three big wins. Coach Karen Yoder was confident prior to their last games of the year.

“We’re excited to have the opportunity to have three more games this season,” coach Yoder said. “Any time you’re in competition, you want to strive to excel.”

Exceeding her expectations, the team came out firing against Cal Poly in the double-header on Friday and the one game on Saturday. Clutch hitting, strong defense and solid pitching played heavily into the Aggies besting rival Cal Poly. Winning 5-2 in game one and 6-4 in game two on Friday, coupled with a final 4-0 victory Saturday, the entire team can stand a little taller finishing on a high note in conference play.

Especially satisfied were the team’s four graduating seniors, who were honored on May 11 during an emotional Senior Day ceremony.

“The entire team played great today, I am excited to end my time at UC Davis with a win and a sweep,” said senior Megan Guzman.

Guzman can be very proud of her final game on La Rue Field, going 3-3 with three stolen bases. The center-fielder finished off her season with 13 stolen bases, adding up to a career-high 51, the second-highest number ever recorded by an Aggie.

Other graduating seniors included Jessica Thweatt, JJ Wagoner and Kelly Schulze, each of whom also contributed to that final win at home. Thweatt threw a full game, allowing only four hits and no runs; giving her her third complete-game shutout in four years. Wagoner finished off her career starting at catcher. Schulze started at first base and then finished the game behind the plate, the position that she started her career at UC Davis in.

“It was nice to end my career the way it started when coach let me finish the game as a catcher,” Schulze said.

With the team’s big wins this past weekend, they finished conference play at 11-13, adding to an overall record of 25-27, just below 500.

“This was a great team victory and the best possible way to end Senior Day,” Wagoner said.

The season as a whole was admittedly challenging for UC Davis this year.

“Every series had a given dynamic,” Yoder said. “We were challenged on every opportunity.”

Opening up conference play at the end of March with an away series against Hawai’i, who was 18th-ranked in the nation at that time, especially tested the players’ skill levels.

“It was a good series even though we didn’t win a game. I’m proud of how we played,” Yoder said.

Although the team went down in conference 0-3, they were able to bounce back, taking two of three against Northridge, boosting their record to 2-4. However, as the season progressed, the team needed to capitalize at the plate and the girls struggled to succeed offensively, losing seven games in league play by only one run, giving them 14 one-run losses overall.

“Offense was our downfall,” Yoder said. “Coming into next season the focus for the players and coaching staff is scoring more runs.”

However, many positives came out of the year. The pitching staff finished first overall, with the lowest ERA in the Big West. To add to that, the Aggies’ solid gloves all year ranked them third in defense in the conference.

Although the team did not meet their ultimate goal of winning the Big West in 2013, with only four graduating seniors and a large freshman and sophomore class, Yoder expects big things out of this young squad.

“There are so many freshmen and sophomores; we have tremendous potential for the future,” Yoder said.

La Rue Field may be a bit quieter coming into these last few weeks of Spring Quarter, but the excitement of another spring season will be here soon enough, bringing with it chants, cheers and a whole new bag of fresh seeds.

SLOAN BOETTCHER can be reached at sports@theaggie.org.