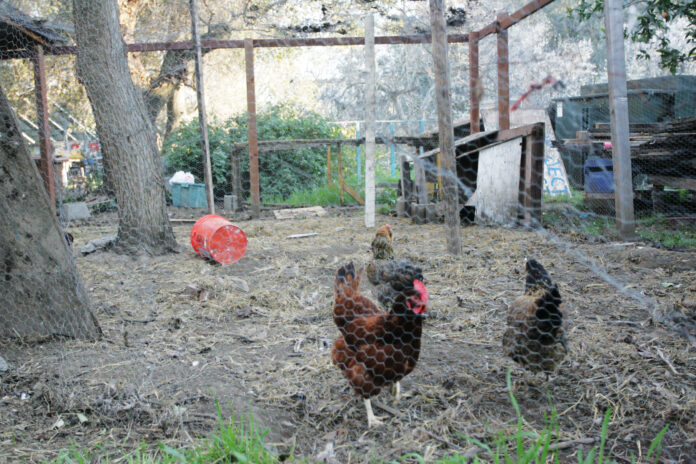 With over a month left until the start of the 2013 Tour de France, Davis residents looking to get their fix of a tour de something are in luck — the fourth annual Tour de Cluck will take place on May 25.

The two main components to Tour de Cluck include the Art Auction and Exhibit and the Bicycle Chicken Coop Crawl, although additional events are ongoing throughout the month of May, according to Neil Ruud, Tour de Cluck event coordinator. The proceeds from the art auction will go to the Davis Art Center, which offers support to local artists, sponsors art-related events and maintains a close relationship with the local arts community in Davis, Ruud said.

Tickets for the event are sold out. Seven hundred people are expected to attend the coop crawl, according to Gilbride, and 17 coops are being showcased.

Yolo Farm to Fork, a 501(c) (3) nonprofit organization, began in 2000 as Davis Farm to School, which is now a program within Yolo Farm to Fork. According to the Yolo Farm to Fork’s website, they support “the use of seasonal, locally-sourced produce in school lunches, nutrition education, school gardens, farm visits and tours, agriculture-based art in the classroom and comprehensive solid waste reduction programs featuring recycling and composting.”

Davis Farm to School works directly with the Davis Joint Unified School District (DJUSD) to support these goals on a local level.

“Eggucation” and art
“I feel my job is to ‘artify’ the event,” said Shelly Gilbride, director of special projects at the Davis Art Center. “Davis is also an art town, and although that’s not always as evident in our town character as being a bike-town or an ag-town, more and more, it’s becoming a part of our identity.”

According to Gilbride, the expansion of the event, the theme of which is “growing, crowing and cycling things,” reflects this multifaceted community identity. This is the first year the Davis Art Center is involved in the event, in part because of event founder Jake Clemens, who felt that more local organizations could benefit from such a large event.

The event, according to Ruud, embodies the sustainable lifestyle that is possible in Davis.

“Chickens are a big aspect of it,” Ruud said. “But we [also] wanted the art auction and exhibit in order to represent the varied interests this community has in healthy, high-quality lifestyles.”

According to Gilbride, the art center will act as a “roost stop” during the coop crawl where people can stop and relax, but the center serves the community in other ways beyond this event.

“Our mission is to be dynamically engaged with the arts in Davis,” Gilbride said. “We offer classes taught by amazing teaching artists, although we’re expanding. Not everyone can attend a class for four weeks, so we’ve started to offer more drop-in and take-home projects. We’re about connecting the values of the town and exploring what it is to be a local arts center.”

Perks of the coops
Collecting eggs in one’s own backyard is about as local as one can get in regard to fowl-related food.

Ruud said not only do backyard chickens allow people to collect their own eggs, but between the time the chicken stops laying eggs and before it has died, many will opt to eat the chicken as well. Others may choose to give them away.

Chickens are inexpensive and easy to care for compared to most other pets, according to BackYardChickens.com, a website which promotes the “green, self-sufficient and grow local movements by educating people on how to raise chickens properly.”

According to the website, eggs from backyard chickens are more nutritious than those bought in stores, containing higher levels of vitamin A, vitamin E and beta-carotene. Chickens also provide a less synthetic method of controlling pests and providing fertilizer.

“Roosters, however, are illegal within city limits,” Ruud said.

According to section 5.01.020 of the Davis Municipal Code, it is also unlawful to keep more than six chickens. The structure the chickens are housed in must be sanitary, at least 40 feet away from any residence other than that of the chicken owner and “the keeping of such animals shall not create a health or nuisance problem.”

Sustainability and safety
According to Ruud, the bicycling element of the route incorporates another aspect of sustainability in Davis that the event emphasizes beyond sustainable food: sustainable transport.

The route, which is approximately 15 miles, is self-guided, although participants are provided with a map to explore the various coops at their leisure.

The event coordinators take great care to ensure there is no cross-contamination from coop-to-coop. Participants are not allowed to touch the chickens or enter the coops, but according to Ruud, cross-contamination can occur simply from walking through the backyard if there is particulate matter present.

Other measures taken during the event, according to a Tour de Cluck document titled “Chicken Health and Safety,” include spray bottles of disinfectant at each coop for visitors to clean the bottom of their shoes, as recommended by the American Poultry Association (APA).

Hand sanitizer will also be provided at each coop, and the document suggests that those with free-range chickens may want to isolate their birds in an enclosure for several days prior to the event and hose down the yard to reduce particulate matter.

More events
Other Tour de Cluck events include the Fowl Food Frolic, during which some local businesses such as the Davis Graduate and Dos Coyotes will be offering signature Tour de Cluck dishes benefiting Farm to Fork. The Frolic lasts through May 25.

Any customer who orders a Fowl Food Frolic dish will also receive a free raffle ticket for the Fowl Food Finale at Sutter Davis Hospital on June 1, during which various prizes will be raffled off, ranging from wine to pet supplies.

Ongoing Tour de Cluck events include Chicken Skool, free talks about various topics related to backyard chicken keeping, and Community Crowers on the Green, during which local nonprofits such as Cool Davis and the Center for Animal Welfare — based out of the UC Davis Animal Science Department — will be at Central Park during the event to answer questions.

“So many more organizations are working together and more people are involved than ever before,” Ruud said. “It’s really about promoting the way we live in this town: healthy, sustainable and connected to agriculture.”