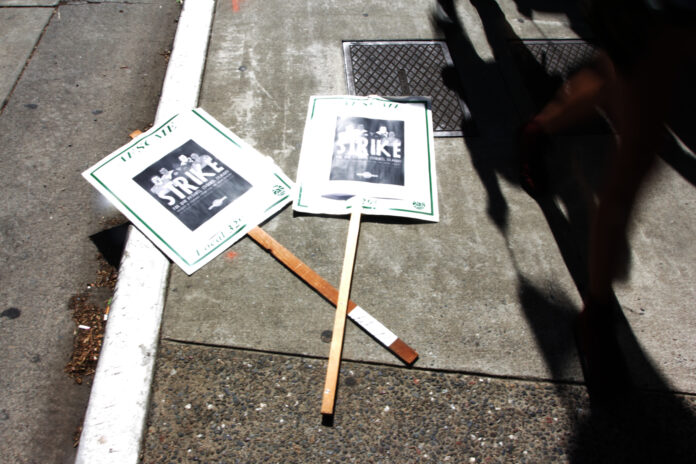 After many tumultuous months of stalled negotiations with the University of California, nearly 13,000 patient care technical workers went on strike at all five UC medical centers on May 20 and 21.

UC has been in negotiations with AFSCME 3299 (American Federation of State, County and Municipal Employees 3299) since last June. After failing to come to an agreement, the union members decided to strike for increased wages and retirement security. They were joined by sympathy strikers from the UC Hospital Service Unit represented by AFSCME as well as health care professionals under the University of Professional and Technical Employees union (UPTE).

“This has been a huge step for workers and it has been very successful. UC needs to get the picture that they need to treat their workers right,” said Jelger Kalmijn, UPTE president.

A recurring theme in the conversations surrounding the strike is patient safety.

“One of the things that can’t get lost in all of this is that these are devoted hospital workers who care about their patients,” said Todd Stenhouse of AFSCME 3299. “It speaks volumes about the commitment of these workers that as they have fought they have continued to serve their patients.”

Both AFSCME 3299 and the UC expressed their dedication to patient safety during the two-day strike.

“We’re doing everything we can to continue to provide patients with high-quality care during the strike, and that includes hiring temporary workers to fill in,” said Shelly Meron, media specialist at the UC Office of the President. “We’ve also been pleased to see so many of our dedicated staff putting patients first and coming to work despite the strike.”

UC also sought a restraining order against AFSCME and filed an injunction against the strike that would require approximately 13,000 UC patient technical workers and 2,000 hospital service workers to abstain from the strike. On May 20, Sacramento Superior Court Judge David l. Brown ruled that about 100 patient care workers would be required to work during the strike.

“In terms of the financial impact we estimate from the strike, the cost to our medical centers will be about $20 million,” said Dr. John Stobo, senior vice president for Health Sciences and Services at the UC.

Both the UC and AFSCME 3299 have expressed the desire to come to an agreement through bargaining.

“This is certainly not the first time that we have engaged in this conversation and this struggle and of course we hope that it will be the last. We are prepared to continue in good-faith bargaining after the strike,” Stenhouse said.