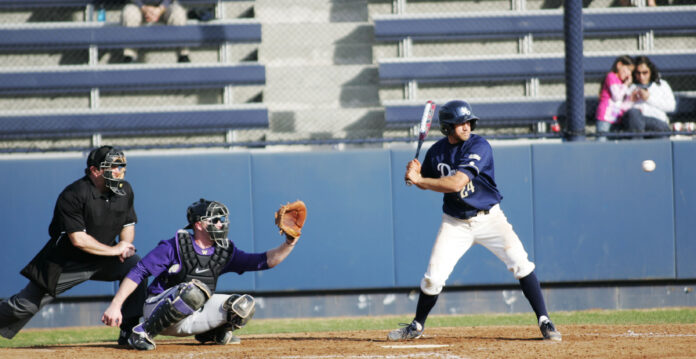 The Aggies completed their season with a 19-37 record overall and finished with a 5-22 record in conference play. UC Davis baseball may look upon this season as a down year, but there were some positive moments. In a season of struggles, the Aggies can view their experience as a platform to build off of in the future.

Heading into the 2012-13 season, coach Matt Vaughn began his second year as head coach of the UC Davis baseball team. He came into the season with a young Aggie squad consisting of just a few seniors.

“When you lose three starters — Anthony Kubpens, Dayne Quist and Tom Briner — in the same year, that is a big blow,” Vaughn said.

“For the most part we did a very good job,” Vaughn said. “To get three wins against a very good Pac-12 — you cannot start much better than that.”

The Aggies continued their early season success with a 22-4 decimation of San Jose State, which interestingly set a Davis school record for batters getting hit by a pitch, as seven batters trotted to first base the hard way.

However, a 2-1 thriller at Dobbins Stadium against Stanford proved a high point in the season. Down 1-0 to begin the bottom of the ninth, sophomore John Williams crushed a 3-2 pitch to right field for a triple. Stanford would retire the next two batters, but Williams would eventually score on a costly Stanford wild pitch. The Aggies took advantage of the error. With a single from senior Paul Politi and a walk to junior Steven Patterson, junior Nick Lynch connected on his first pitch with a single to right field, bringing Politi home for a walkoff win.

“This was a big win especially coming off a tough series against Seattle University,” Vaughn said.

Following the exciting Stanford victory, the Aggies began conference play on the road against 21st-ranked Cal Poly, which would lead to another streak of consecutive conference losses. Davis lost their first nine conference games to fourth-ranked Cal State Fullerton and then Long Beach State. In what was statistically the toughest schedule in Big West play, the Aggies were able to maintain consistent hitting throughout, ranking top five in conference with a .281 team batting average.

Davis picked up their first conference victory and series sweep against UC Riverside. In the sweep, Politi shined with two home runs and went 4-5 in their final game of the series. Patterson maintained a hot bat as well, as he went 3-5 with three runs and a game-high five RBI, including a solo home run.

“We weren’t playing well but we were playing hard in that tough stretch,” Vaughn said. “To finally have our efforts pay off with some wins is fun.”

The Aggies’ bright spot during this span was a road-conference series victory against Pacific which saw junior Harry Stanwyck toss the Aggies’ first shutout of the season and of his career. The final stretch of the Aggie season also saw increased hitting production from Patterson, who held a team-high 13-game hit streak during his streak of 27 consecutive games reaching base.

What separates a good team from a great team is learning from mistakes and hardships. While the Aggies lose several seniors who helped contribute to their conference leading 555 hits and third-ranked .283 batting average, the Aggies still hold onto key contributors such as Patterson, Williams and Lynch.

Meanwhile, the inexperienced pitching staff gained valuable experience and playing time this season on their way to posting a 5.32 ERA. Hopefully, the Aggies can use these experiences as a chance to learn and grow as players.

SHAUN MONCADA can be reached at sports@theaggie.org.