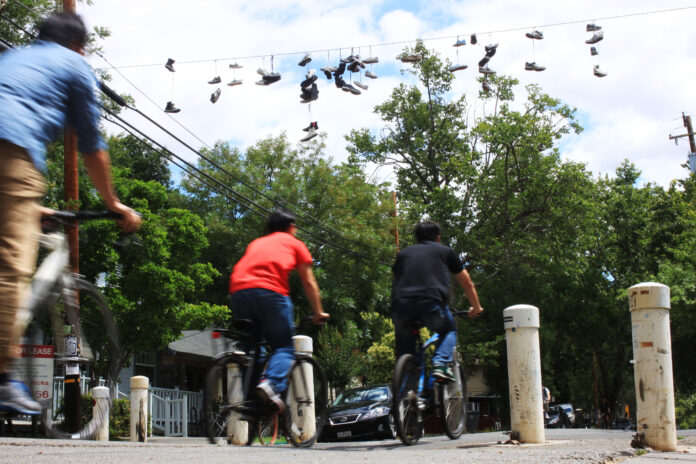 On May 17, The Atlantic magazine published a list of the 25 most bikeable neighborhoods in America, based on ratings given to each neighborhood by Bike Score, an extension of the Walk Score and Transit Score. Davis had five neighborhoods in the ranking and Sacramento had seven.

Professors from Simon Fraser University and the University of British Columbia helped to develop the methodology for rating cities. The rankings are based on thousands of voters from the community near the headquarters in Seattle, Wash. Voters suggested over 100 factors that make a city bikeable.

“Bike Score provides a 0-100 rating of the bikeability of a location based on the availability of bike infrastructure (lanes and trails), the hilliness of the area, nearby amenities and road connectivity, [in addition to] the number of bike commuters,” Walkscore CEO Josh Herst said in an email.

The high ranking that neighborhoods in the City of Davis received from Bike Score doesn’t come as a surprise to David Takemoto-Weerts, TAPS Bicycle Program Coordinator.

“Biking became popular in Davis in the 1960s, before the city started to promote it. [Davis is] flat, has mild weather year round and is surrounded by farmland. If you lived in Davis, your commute was relatively short in the 1960s — two to four miles,” Takemoto-Weerts said.

In the 1960s, when Davis started to become a pioneering bicycle city, a much higher percentage of the city’s population was involved with the university than today, so any efforts to improve bikeability on campus inevitably spread to the surrounding city.

“The city and campus have a symbiotic relationship,” Takemoto-Weerts said.

Several of the top Bike Score cities in the U.S. are known as college towns, including Cambridge, Davis, Berkeley and Boulder.

The bikeability of the UC Davis campus was greatly influenced by Emil Mrak, who was the chancellor of UC Davis from 1959-69. He aimed to make the campus more bicycle-friendly and in 1967 introduced the bicycle-only blocks around campus.

He also made sure that bike parking was available at every building, close to the major entrances to encourage students and faculty to bike to class.

The City of Davis was the first city in the U.S. to implement bike lanes in 1967, no small feat.

“It wasn’t an easy process, [the project] had to go through Caltrans and various legislatures for approval,” Takemoto-Weerts said.

In 2006 Davis became the first city to earn the Platinum Bicycle-Friendly Community Award from the League of American Bicyclists. The City of Davis is also home to the U.S. Bicycling Hall of Fame.

Jimmy Fong, a transportation program specialist for the City of Davis, said that the city plans to improve bikeability for its residents.

“We want to improve safety, continue to educate bikers and incorporate infrastructure updates for problem areas,” Fong said. “In 2017, the 50th anniversary of bike lanes in Davis, we will celebrate with a festival. We want to move up to the Diamond Bicycle-Friendly Community award.”

The highest-ranking neighborhood on the Atlantic’s list is Old North Davis, which is getting ready to celebrate its 100th anniversary. It was the first suburb of Davis. Old North Davis spans from G Street to the railroad tracks, and from Fifth Street to Seventh Street.

Steve Tracy, the president of the Old North Davis Neighborhood Association, said that the neighborhood is working to improve bikeability for its residents.

“For 10 years we’ve been lobbying to reduce the lane count on Fifth Street to two lanes and add bike lanes, which will be happening this summer,” Tracy said.

Old North Davis will begin to charge for parking in their neighborhood, something they haven’t done in the past. Parking passes will cost approximately $75 annually, and the revenue will be used to improve safety for bikers and neighbors.

Tracy credits the neighborhood’s high Bike Score to the amenities that are available in Old North Davis.

“All kinds of day-to-day services are available in North Davis; the Davis Co-op, restaurants, a lumber yard and more. It is the best place to live in Davis; I’ve been here for 40 years,” Tracy said.