Artists showcase work at ‘Past Reservations’ 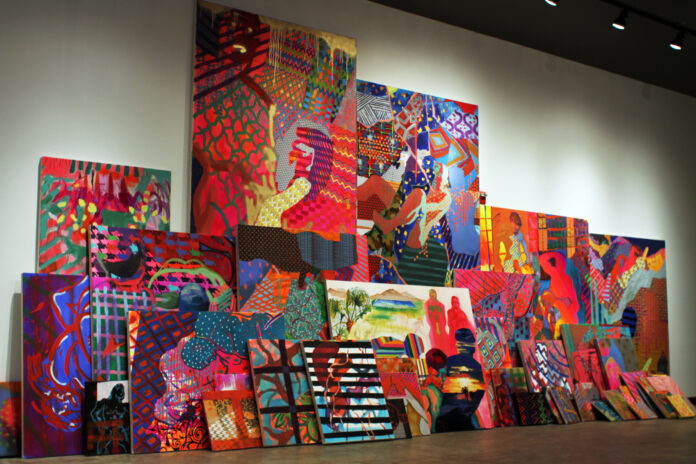 The event, which took place in the old Nelson Gallery offices in the Art Building, launched the student-work exhibition that ran through June 4.

The event will showcase the works of first-year MFA candidates. The MFA is a small and interdisciplinary two-year art graduate program that is made up of artists working across mediums and topics.

Every year, the MFA puts on the exhibition in hopes that it will serve as a more official introduction to both the school and the surrounding community that takes pleasure in participating in the arts.

This year, however, the artists felt particularly attached to the exhibition because they literally built it themselves. The old Nelson Gallery offices have been out of use by UC Davis for the past few years and have been used as storage for the local gallery.

Students decided that they wanted to host their show in their own art building, so the group of seven students and a couple of professors single-handedly emptied out the offices, sifting and prodding through items that had not been touched for years, in order to create their own space where their artwork could be enjoyed by the public.

As a result, the exhibition is entirely a product of their own work, as they have created a space that convenes all of their very different artistic creations.

“You never see this in the reality shows, like ‘Work of Art.’ It is such a challenge for young artists to create their own exhibition, let alone the space in which it takes place,” said Brett Davis, one of the student artists. “It gives you such pride as an artist, knowing that you produced every inch of the entertainment.”

For many of these students, the exhibition serves as the first opportunity to showcase their work to the public eye. This year’s show, entitled ‘Past Reservations,’ incorporates works by prospective MFA candidates Brett Davis, Alyssa Lempesis and Daniel Harano, whose work I was particularly taken with.

Davis’ polychromatic creations contrast magnificently with the hospital-white walls of the gallery and immediately drew me in. Only from a closer point of view can people see that behind the carnivalesque colors lies a darker truth.

Two of Davis’ paintings, “Love is In and Out” and “There, there” drew inspiration from a pediatrician’s book. Behind the colorful surface, people can see the children’s serious expression, evoking their physical pain and suffering.

Using oil on either canvas or ceramic, Davis tries to identify what connects people to one another.

“I try and see what I can use as source materials, and how I can use it as a way to communicate. I try and get back to the messiness of connection,” Davis said.

Another artist’s work that caught my eye was that of Alyssa Lempesis. Having studied studio art at UC Berkeley, she came to Davis to find a closer community of artists, which she successfully found in the tight-knit group of seven students.

Lying on the ground, her sculptures attempt to invite a tactile reaction, as they are made from materials that relate to the body.

“I was drawn by the link between figuration and abstraction. I want people to feel seduced into touching my work. I specifically chose to present it on the ground, because people are more aware of space on the floor. I also specifically chose to use urethane as a material because of its seductive quality,” Lempesis said.

Equally as puzzling is the sculpture by Daniel Harano, a ceramics student from the University of Hawai’i. On the righthand corner of the gallery lies a mound of what could be perceived as thousands of squirming snakes — his artwork, “In Ignotus.” Upon approaching it, people realize that it is made of thousands of carefully formulated pieces of clay that climb up the wall and down to the floor.

“My work extends from my curiosity about the natural and mechanical world; how they’re alike, how they differ, how they can be combined into a singular form. As a result, I work nearly exclusively in clay. Similarly to the ideas that drive my work, clay as a material encompasses both the natural and mechanical world. It’s a tough material to work with, continually pushing me to the limits,” Harano said.

The students believed the show was a major success.

“I am extremely proud of the first-year show. I think it was a huge success and I couldn’t be more proud of what we did to overcome all the obstacles put before us. We’re a force not to be taken lightly and we proved it in this show,” Harano said.