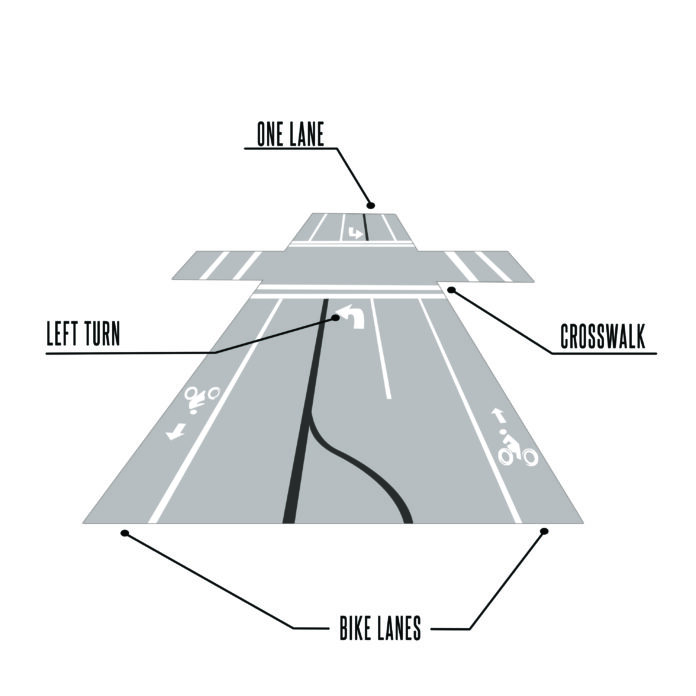 On May 28, the Davis City Council approved the long-awaited project to redesign Fifth Street. The final project is anticipated to cost $1.9 million.

“The project is intended to make a safer street for pedestrians and cyclists between A and L streets,” said Kelly Stachowicz, deputy city manager for the City of Davis. “We want a safe path of travel going down the street.”

According to a report by the City of Davis, the redesign will change the street from four lanes to two lanes with designated bike lanes on either side. Turn pockets, a dual left-turn lane and striped pedestrian crosswalks will also be added. Additionally, new traffic signals will be added to the F and G Street intersections and the existing signals at A, B and L streets will be modified to accommodate the changes.

Pedestrian safety will be improved by adding pedestrian-activated crossing lights at the crosswalks of C and J streets.

Roxanne Namazi, senior civil engineer for the project, said the absence of bike lanes on Fifth Street, between A and L streets, creates a gap in the movement of cyclists along the Fifth Street/Russell Boulevard corridor.

“The east-west corridor provides a continuous bicycle route from Mace Boulevard at the east city limit, all the way to the west city limit near County Road 98,” Namazi said. “This entire corridor provides an off-street path, except between A Street and L Street, where cyclists must either share the road with motorists on Fifth Street.”

This project has a long history in the City of Davis and it has taken many years for it to be recognized, said Steve Tracy, a Davis resident and member of the Old North Davis Neighborhood Association (ONDNA).

In 1993, the City of Davis general plan was updated and it included a proposed redesign of Fifth Street to improve bicycle and pedestrian safety.

“The city staff was very hostile to the idea at the time and didn’t do anything for about 10 years,” Tracy said.

The ONDNA revisited the plan in 2003 and then presented the plan to city council and asked that the redesign be implemented. City council agreed to look into the matter and conducted several traffic studies.

The only change implemented from these studies was new traffic lights at the F and G Street intersections, Tracy said.

Emily Tracy, community outreach coordinator for Davis Bicycles!, said that in 2009 they were finally successful in convincing the city to move forward with the plan after a successful campaign from Davis Bicycles! and the ONDNA.

“Over 2,500 signatures were collected from residents all over the city asking the Council to address the safety and comfort concerns for all users of Fifth Street by implementing a road diet, improving pedestrian facilities and adding bike lanes,” Emily said in an email.

On Sept. 8, 2009, the petition was presented to City Council and they unanimously endorsed the project. However, the City of Davis Public Works survey of the Fifth Street corridor that started in 2008 was not yet completed, so the final project design was approved on April 27, 2010.

Most of the project cost will be covered by a 836,000-dollar Sacramento Area Council of Governments grant awarded to the city in 2010 for the project, Namazi said. The city was also awarded $200,000 in Highway Safety Improvement Program grant funds in 2012 to provide for pedestrian safety improvements.

“The street is a major connector from the northeast corner of Davis to the campus and those not in cars are very vulnerable to accidents on Fifth Street,” Tracy said. “We are trying to save lives.”

The City of Davis report states that Fifth Street between A and L streets sees average daily traffic of 12,000 to 17,000 vehicles.

The city will now put the project out for bidding and try and find a contractor within the $1.9 million budget. They hope to start construction in August and have most of the major work done by September so it is out of the way by the time Fall Quarter classes start at UC Davis, Stachowicz said.

Namazi said that city staff is trying to accommodate for traffic delays that will occur during construction by developing a public outreach strategy that includes the details of each project, including project locations, time-frame and detours.

“As the current best practices for street design continue evolving, it will be important to revisit all our streets from time to time to make sure we are supporting all modes of transportation to the limit of available funding and space,” Emily said. “Fifth Street is certainly the biggest priority for bicycle and pedestrian safety improvements right now, but there will always be room for improvement throughout the city.”