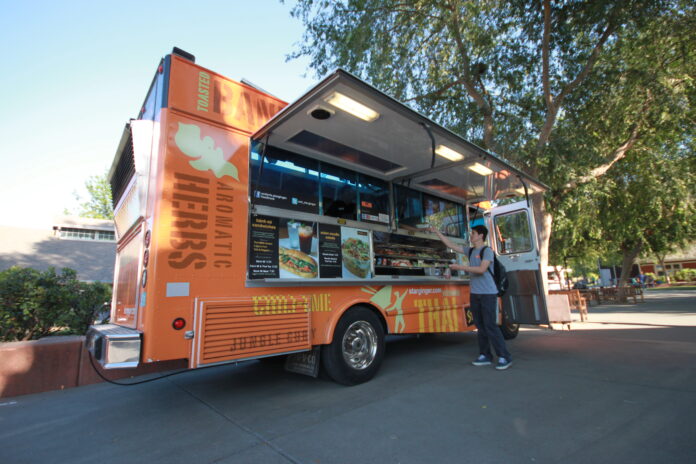 The Davis Dirt will be putting on a third Davis Street Food Rodeo on June 7. Sixteen food vendors will be serving food between 4 and 9 p.m. on Sixth and G Streets. Part of the proceeds from the event will be allocated to the Davis School Gardens.

Vendors at the event include Hawaiian food from Addison’s Originals, Addy’s Paella and vegan, gluten-free desserts from Bliss Creations.

“Food trucks are not seen much in Davis and we like to promote and start fun events for Davis,” said Davis Dirt editorial board member Melanie Gentles. “We thought it’d be a great opportunity to do a fun event and bring something we typically can’t have in town and benefit the community.”

The event has been welcomed by the community and attracted some well-known food trucks. Event organizers and The Davis Dirt’s editorial board members, Melanie Gentles and Annie Meckstroth, have taken steps to improve the event.

“We introduced street performers at the second event to reduce line waiting. There’ll be live music and … community folk dancing. At the last rodeo, people young and old were dancing together … It’s hard not to laugh, you just have a good time,” Meckstroth said.

They have increased the number of trucks and vendors. This time there will be 11 food trucks and six other vendors, Meckstroth said.

A challenge with the event has been the expense, especially due to the challenges that come with food truck culture.

Whether you’re a mobile food vendor, a self-propelled wagon or cart selling food, you have to have a public health permit and a business license,” said Bob Bowen, promotions manager for the City of Davis. “In most cases they have no connection to Davis and are not existing establishments. We don’t want someone out of town to take business away from the businesses of people in the community.”

The event has come with challenges for this reason.

“The Yolo Credit Union has sponsored the event because it’s so expensive. They’ve given a lump sum donation which allows us to donate money at the end of the day to cover the costs. The city and downtown are nice to work with we are grateful for their cooperation,” Gentles said. “Part of the reason you don’t see food trucks very much is because the permits are very expensive.”

Recipients of the ASUCD Entrepreneurship Fund, Larry Faygin, a second-year electrical engineering major, and Ben Bigelow, a second-year mathematics major, will be starting a food cart on campus next spring. Their food cart will serve Mexican cuisine.

Faygin said the Street Food Rodeo exposes the Davis community to new types of cuisine which are not as common for the City of Davis.