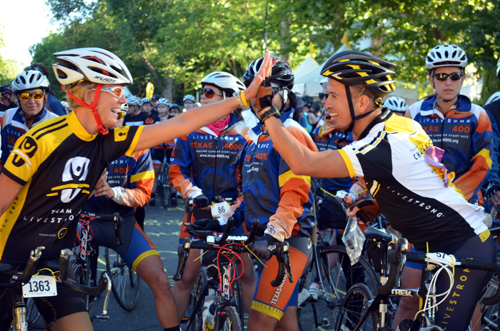 On an average day, most bicycle-riding Davis residents are doing so with the purpose of transportation or exercise. However, on June 23, riders in the Team Livestrong Challenge bike ride will have the opportunity to bike with another purpose: benefiting those affected by cancer.

The 2013 Team Livestrong Challenge series consists of three rides, each in a different city, according to Matt Florio, fundraising and events coordinator for the Livestrong Foundation.

The event begins and ends in Central Park and riders will start at 7:30 a.m. The ride is multi-distance, said Florio, with Davis riders having the option of riding 25, 45, 65 or 100 miles. This is the third year the event has taken place in Davis.

“We’ve been doing this for a number of years. Before Davis the event was in San Jose for three years and was then moved up to Davis,” Florio said. “With Davis being very cycling-focused, we thought it would keep it fresh.”

In the last three years alone, over 15,000 riders have participated in the Challenge series, Florio said. According to a press release issued by the Livestrong Foundation, Team Livestrong has raised over $80 million dollars since 1997 to pursue the goal of the foundation, to “fight to improve the lives of people affected by cancer now.”

The Team Livestrong Challenge ride is only one of over 20 athletic events which raise funding and awareness for the foundation.

According to Florio, funding toward the foundation does not go to cancer research, but instead directly supports those with cancer.

“We provide programs and services for cancer patients. If someone is diagnosed, they’re going to have a lot of questions, and there are things we can do immediately — answering insurance questions, general care [and] emotional support,” Florio said. “People are going to have those questions and they’re going to want to talk to someone. We have trained staff, called navigators, to talk to people and refer them to other organizations who can help them as well.”

Riders in the Livestrong Challenge must fundraise at least $250 beforehand in order to ride or, if not, can pay the amount themselves. Those who cannot or do not wish to ride but still wish to be involved can also volunteer at the event.

This year’s event is more locally focused than years prior due to a partnership with the Sacramento Region Community Foundation.

Five percent of the funds raised from the Challenge will be distributed to local cancer-related organizations via the Sacramento-based foundation.

“This is a new thing for us,” said Linda Cutler, CEO of the Sacramento Region Community Foundation. “They want to increase their contribution to the community, and that money will stay local.”

According to the website of the Sacramento Region Community Foundation, their mission is “to serve as a leader and trusted partner in expanding philanthropic activity and enhancing its impact for the betterment of our community.”

According to Cutler, the foundation manages approximately 450 donor-advised funds worth about $110 million in assets. Donors set up a fund through the foundation, and the foundation distributes the money to a cause chosen by the donor. Funds without a specified use are known as unrestricted.

“We try to encourage local giving, and when we have unrestricted funds we’re committed to keeping it local,” Cutler said. “The next generation of donors, by large, are interested in this local impact and sustainability.”

Other new developments this year include a children’s bike rodeo to take place at Central Park during the challenge, according to the press release. The rodeo is free and is intended to “teach kids the proper bike safety and handling skills they need to ride around the city recently ranked as the fifth most bike-friendly city in the world by Active Times magazine.”

A post-event party will also be taking place at Central Park, Florio said.

“We have food, drinks and music,” Florio said. “We want to create a fun atmosphere.”

In addition to being a fundraising event, the ride serves the local community as well.

“We saw the Team Livestrong Challenge as a timely opportunity to make a lasting impact in the community,” said Nick Denby, Livestrong Foundation vice president of development in the press release. “Davis has always been a great host to our event, and we are proud to work with them to improve the lives of people affected by cancer today.”

Both riders and volunteers can still sign up at teamlivestrong.org. Rider check-in and bib pick up will be taking place at Central Park on June 22 from 10 a.m. to 4 p.m. and also on the morning of the event, during which riders can still register as well.