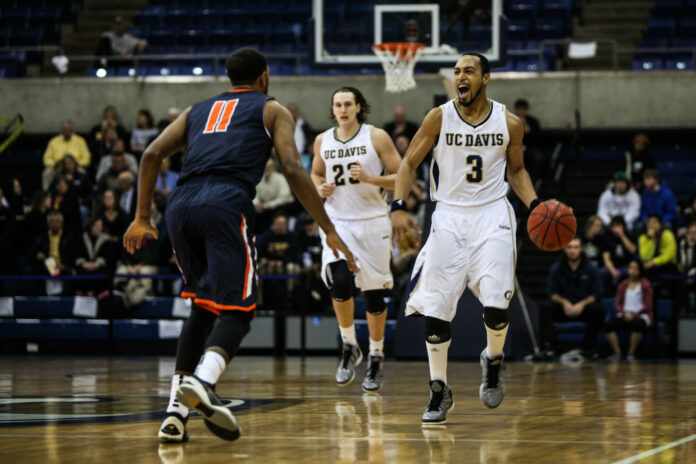 UC Davis Men’s Basketball has been seemingly revived overnight. A large part of this transformation is due to the amazing play of sophomore Corey Hawkins. He was a crucial part of the Aggies’ basketball team and their much improved 14-17 overall record.

This season was Hawkins’ first season playing with UC Davis. He sat out last year due to NCAA transfer eligibility rules.

Despite this, Hawkins looked at home out on the court as he led the Aggies in points with a stunning average of 20.3 points per game and was third on the team in rebounds with 5.6 rebounds per game. He also was second on the team in assists with a total of 93 assists and a 3.3 assist per game average.

Hawkins is known for his analytical ability to score the basketball, as evidenced by the season-high 40-point showcase at Hawai’i. He led the Aggies in scoring for 17 of the 31 games this season and dropped 20 or more points in 15 of those games.

Why has Hawkins had so much success this year? His hard work and determination have a large part to do with it.

“He has been spending time in the gym before practice, after practice and before games constantly working on his jumper,” said head coach Jim Les.

Hawkins’ big game brilliance was most evident in the Aggies’ game against Long Beach State at the Pavilion. Hawkins had one of his best performances of the season in the game, which was broadcasted on ESPN. He scored 34 points on 12-19 shooting from the field and a perfect 8-8 on the free throw line.

Hawkins also managed to corral seven rebounds and dish out eight assists, as he single-handedly carried a struggling Aggies offense. Even though the effort fell short, Hawkins put on a brilliant display on national television.

Hawkins has received widespread recognition for his work this season. He earned both Big West Newcomer of the Year and first team All-Big West awards this year. But perhaps the biggest recognition of Hawkins’ season was his nomination to the Lou Henson All-American Team, which recognizes the top 25 mid-major players in the nation.

Aggie basketball looks promising next year. With the addition of some new talent and the steady brilliance of Hawkins, UC Davis can go far next season. Maybe, it can even make it to the Big Dance.