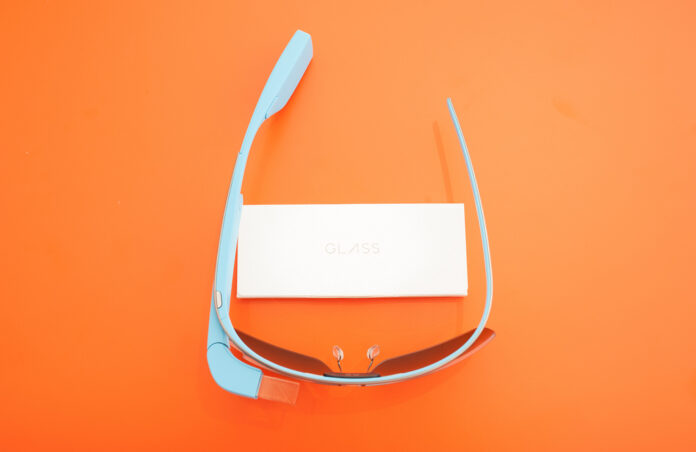 Augmented reality (AR) is basically a live, direct or indirect view of a real-world environment whose elements are augmented by computer-generated stimuli ranging from sound to graphics. It may sound new, but it is the same type of technology used to draw lines on satellite pictures of streets in Google Earth. It seems that Google did not stop there. Google announced the development of a head-worn AR display in late 2012, and by February 2013, the device was introduced to the public.

In February, Google launched the Glass Explorer program, and a selected few were given the opportunity to try out the futuristic lenses. The Explorer edition receives data through Wi-Fi, or can be tethered to a smartphone with network capability such as an iPhone or Android. Users can issue voice commands by first saying, “OK, Glass,” and then the command, or they can scroll through the options using a finger along the side of the device. The Explorer edition also has an interchangeable sunglasses accessory which twists on or off. Eventually, Google Glass plans on incorporating the device into normal eyewear. Google hopes to install all the same apps as a smartphone so it will be even more hands-free and convenient than ever before.

While exciting and enticing, the prototypes are very expensive at $1,500 a pair. They are supposed to be available to the public in the next year, but they may have some unexpected competition, proving AR isn’t as original as they once thought.

Meet the Epson Moverio, originally released as a personal video-viewing device equipped with removable shades and headphones. With its obvious similarities to Google Glass, it is slowly evolving into a rival. Developers at APX labs have converted a version of Moverio into an AR device with a camera, mic and nine-axis motion sensor suite. Though not as sleek as Glass, it boasts unique programs like Northstar. Northstar is a series of field-of-view points that you need only turn your head toward in order to access the AR content. You can access traffic maps and live video feeds simply by looking at the horizon.

While it seems people will have options for AR in the coming years, patience will be required as it will take time to mass-produce the devices, and there are privacy issues to sort through before making AR glasses available on the market. For now, we will just have to make do with smartphones and 3D movies.

NICOLE NOGA can be reached at science@theaggie.org.