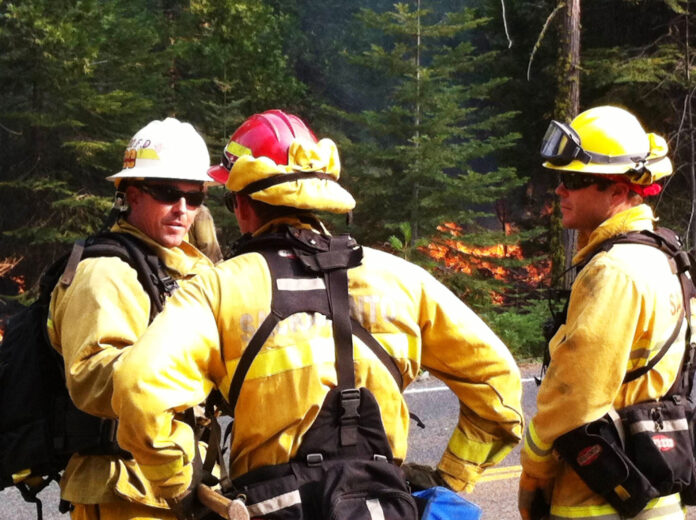 The Rim Fire, the third largest in California’s history, began on Aug. 17 in Stanislaus National Forest. Just days later some of Davis’ own firefighters were called to the scene.

Firefighters from both the City of Davis Fire Department (CDFD) and the UC Davis Fire Department (UCDFD) arrived on scene on Aug. 21, when close to 1,000 personnel were on scene. At that time, the fire was five percent contained. For 10 days they woke up at 5 a.m., often working through the night to fight the fire.

Shawn Kinney, division chief for the CDFD, led the Yolo County strike team. His team arrived Aug. 26, making up part of the 3,678 personnel on scene. At that time, the fire was just 15 percent contained, burning 149,780 acres. He was on scene for eight days.

“Our team had to make sure we [were] working where [we were] supposed to and that we [were] taking care of our firefighters. To summarize, logistics were a challenge — you have to eat, take care of yourself, sleep — communications were very challenging especially due to such rugged terrain,” Kinney said.

Kinney added that his team would often have to hike six miles to burn out part of the fire in order to get ahead, which was a great challenge.

“People should know about these big forest fires, it is a big deal … there are huge implications. [Yosemite] will never be like what it was,” said Cess Mercado, a fire engineer for the UCDFD.

Each day was demanding and was dependent on the massive, quickly growing fire. Crews spent long days digging trenches, working on structure protection and burning out brush to its “moon soil,” also known as mineral soil.

“There’s a lot you can do to prep a structure — taking brush away and moving things to make it less susceptible to catching fire,” said Derek Carthy, probationary fire engineer for UCDFD. “We dug [a] hand line near the fire edge and some backburning to bare minimum soil so it’s less likely to jump the line.”

Malcolm North, a research scientist for the Forest Service as well as a UC Davis associate professor of forest ecology, stated that the severity behind the Rim Fire was due to the fact that much of it was a “crown fire” where fire would burn at the top of the tree line jumping from tree to tree, rather than burning on the forest floor.

“Where it becomes destructive is in the overstory … where it can create places that not only kill all the trees but the live trees that seed forest brush,” North said. “It really eliminates some of the habitat.”

North said some species, such as woodpeckers, can make use of the changes, while others, including the Northern Grey Goshawk and the Spotted Grey, are now more at risk.

Wildlife is just one aspect of the natural environment that was impacted by the fire. Donald Turcotte, a geology professor at UC Davis who has done extensive geophysics research, said there are many implications from a fire of this scale.

“The Forest Service had wanted to use controlled burns where the Rim Fire occurred,” Turcotte said. “If they had done this they could have controlled it much more easily. It’s a highly debated issue.”

Turcotte elaborates on a fairly simple model that predicts what small scale changes can do to produce a massive fire.

“A big question has been ‘Does aggressive fire suppression create a greater hazard?’ Studies indicate that if you don’t put out small fires you’re at lesser risk for huge fires,” Turcotte said.

This issue raises many questions about the importance of controlled burns — albeit their controversial nature. Steve Dunne, captain of the UCDFD, who went on scene with Carthy, Mercado and Erik Schultz, spoke about this concern.

“I hope that at some point the Forest Service will reevaluate the idea of controlled burns. There are parts that have never been touched by a fire,” Dunne said. “Nobody had ever cleared it out, which makes it very nice to look at — however, all the dead vegetation makes for a greater fire hazard. They have the mentality of ‘let it burn,’ but now we’re having to play catch up.”

Dunne also said that the work they did was not easy and came with many obstacles.

“There were times the fire was coming right towards us, [and] you know when to say you have to get out of the way. Those were the decisions I had to make as a captain,” Dunne said. “I have three guys looking to me and it’s knowing someone could get hurt or killed — that’s my biggest fear.”

Both Dunne and Kinney share their hopes that the Davis community be proud of their firefighters.

“The community and the students at UC Davis need to understand how proud they need to be about all our firefighters here,” Dunne said. “We’ve got to appreciate the firefighters all over Yolo County. They’re doing their job every day.”

“When we go out and work 30 hours, it’s 30 hours, and it’s with hand tools,” Kinney said. “It’s nothing but hard work and our people represented very well.”

A recent article by The Sacramento Bee stated that about 40 percent of the land inside the fire’s boundaries has been left charred and barren.