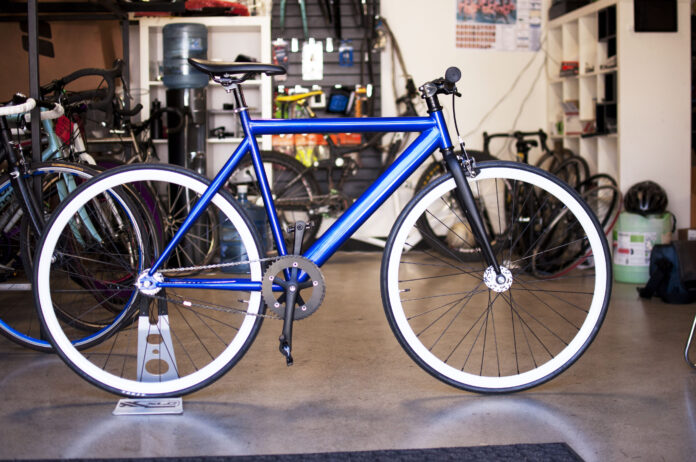 Beginning as an online garage project and worked on between classes to pay for college loans and rent, two UC Davis alumni co-founded and now distribute their own bicycle brand.

From the penny-farthing city symbol to such colloquial terms as the “freshman stripe,” cycling is central to the Davis identity. Nearly every person in Davis rides or encounters bicycles every day, but not too many endeavor to actually build one.

Vincent Vu and Ary Ashoor are the co-founders of CITY Bicycle Company, which they started their senior year at UC Davis in 2012.

“This company definitely would not have started if we had not come to Davis,” Ashoor said, who graduated with a bachelor’s in environmental toxicology.

Vu and Ashoor met in Kearney Hall as first-years. Both were originally from Southern California, and until they were inspired by friends who enjoyed customizing bikes, neither even saw bicycling as a reliable form of transportation.

Having worked in a car repair shop during high school, Ashoor found the mechanics of bicycles less complex and introduced Vu to single-speed bikes, which they rebuilt from used parts and resold online.

“When we got to Davis, bikes were very expensive,” Vu said, who graduated with a bachelor’s degree in English. “What we did was strip the used bicycle to their bare basics, so it was really affordable, a different look and more maintainable.”

After two years of reconfiguring used bikes in their garage, a mutual friend introduced them to manufacturing ties overseas in Taiwan, where many American retail bicycles are made, according to the National Bicycle Dealers Association.

“It was a chance to design our own bicycles from the ground up,” Vu said.

After receiving their first import of 130 bicycles during the winter of 2012, they were able to sell out within a month through Craigslist and through friends at UC Irvine, UCLA and UC San Diego. This experience then led them to continue importing and redesigning, and according to Ashoor, they essentially went to “business school online” to become more established.

Being able to sell a new product through a medium that mainly advertised used items gave them a competitive edge, but also created a hurdle in terms of consumer trust.

“Building our brand from Craigslist and [through] word of mouth, we were also competing with big bike brands,” Ashoor said. “At times, for 12 hours I’d drive doing deliveries and repairs. We had to offer that customer service so people would trust our brand.”

They now have two warehouses in Los Angeles and Sacramento managed by Vu and Ashoor respectively, and distribute to five retailers in the LA and capital region with plans to spread to the east coast and Canada.

Pure Fix Cycles is one of CITY’s major competitors who also sells introductory model fixed-gear bikes that have comparable features, marketing, price range and even more variety. Pure Fix began as a startup at the University of Wisconsin, Madison which then moved to Burbank, Calif. and is already a national company after only two years of operation.

Aaron Curtin, owner of APEX Cycles and a 2002 alumnus of UC Davis, is currently CITY’s only retailer in Davis, and has also carried Pure Fix in the past.

“In the American market, people are very brand-conscious,” Curtin said. “CITY has an uphill battle of breaking into a market share that has a lot of companies that sell a very similar bike. They see how market trends are going and try to adjust accordingly, and they’ve been good at that.”

Curtin said being the exclusive retailer of CITY in Davis has its benefits as far as transaction fluidity from manufacturer to consumer, but he also chose to hold their brand because of their locality.

“They were the front end of the shop, the back end of the office, they were the middleman,” Curtin said. “They knew what Davis students needed because they were students. They remember riding their bikes back and forth to school and how much it would cost to maintain the product.”

The expansion of Pure Fix and CITY, two student-spurred bicycle companies, within the past two years illustrates the consumer demand for bicycles that are essentially creating jobs even in times of economic hardship.

Ashoor and Vu initially intended to go to law school and medical school, but veered from those paths with this company. Ashoor also works part time for the Environmental Protection Agency, where he had an internship during college. His income aided the production of the bicycle company at first, but even after being officially hired, his salary was still at the internship’s rate.

“Surviving off an internship wage is very difficult,” Ashoor said. “I don’t know what would have happened to me or Vince if this company had not happened. We’d just be like everyone else trying to find a job to get by.”

SEAN GUERRA can be reached at features@theaggie.org.