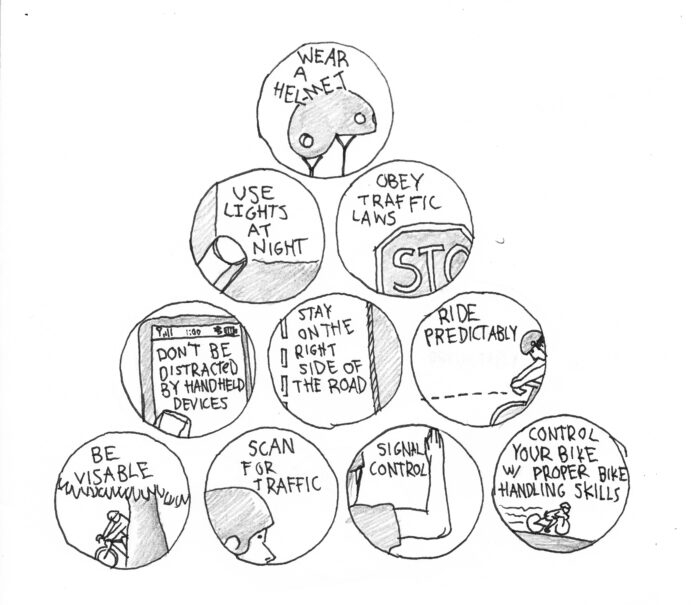 In recent weeks, there have been numerous accidents involving pedestrians, bikers, buses and cars both on campus and in downtown Davis.

What many students do not know about biking is that bikes are considered motor vehicles: bikers do not have the right of way like pedestrians do.

Cycling activist John Forester, known as “the father of vehicular cycling,” advises people to treat their bicycles as if they are cars. He states in his works that “Cyclists fare best when they act and are treated as drivers of vehicles.”

Cyclists must obey the same traffic laws as car drivers do, including stopping at stop signs and traffic lights and wearing lights at night. A person on a bicycle can be fined if they do not follow these laws.

“Cyclists need to be aware of traffic laws,” said Dave “DK” Kemp, the Active Transport Coordinator for the City of Davis. “Not wearing a helmet, not using a light when it’s dark outside and using headphones or cell phones while biking are dangerous things to do.”

According to Kemp there are 10 rules to bike safety:

Wear a helmet, use lights at night, obey traffic laws, do not get distracted by handheld devices, stay on the right side of the road, ride predictably, be visible, scan for traffic, signal control and control your bike with proper bike-handling skills.

There have been many bike crashes on campus involving students who are not familiar with traffic laws and are not aware of how important bike safety is. Some students have gotten into serious crashes that make them realize how real and common bike accidents are. As a result, they learn how to better educate themselves in order to prevent crashes in the future.

Raymond Lee, a first-year math and scientific computation major, was involved in a bike crash on the UC Davis campus on Oct. 10 with another student who was also biking.

“I’ve been able to talk on the phone while riding my bicycle in the past, so I thought nothing of it,” Lee said. “Because I was distracted by my phone conversation, I wasn’t able control my bicycle the way I wanted to. Once I realized I was in trouble, I threw my phone away, closed my eyes and braced myself for the collision.”

Lee said he pictured the entire incident in slow motion, and when he opened his eyes, there was blood dripping down the side of his face. After apologizing and making sure the other student was okay, a few bystanders assisted to their injuries until the officials came.

“Do not think you are invincible,” Lee said. “Everyone thinks things like this will never happen to them. Accidents may be caused by one person, but it affects two people. Just because you don’t do it, doesn’t mean someone else won’t accidentally run into you.”

Another student was involved in an accident in downtown Davis,  who must remain unnamed because the matter has not yet been settled in court. The student obeyed all traffic laws and began biking when the light turned green, but a car ran a red light and knocked the student off of the bicycle. The student is currently suffering from serious injuries due to the crash.

“The accident has scared me into wearing a helmet,” the student said. “You never know how you can land, it is possible that you can land on your head. If I ever bike again I am definitely going to wear a helmet.”

When asked about the lack of awareness regarding traffic laws, the student insisted that it is important to learn them.

“Please just learn them,” the student said. “Make the roads safer. Watch the signals and do not talk while driving. Everyone thinks these kinds of things will not happen to them, but they can. I never thought it would happen to me, and it did.”

The arrival of new students means many people are not familiar with the safety requirements when it comes to biking. Although it is not possible to force everyone to wear helmets or not text and talk on the phone while biking, the UC Davis Police Department (UCDPD) is doing their best to educate students in order to ensure their protection.

The police officers have been around campus during orientations and other events to inform students about basic rules and tips when it comes to biking. To them, safety is the most important.

When cyclists are cited and fined, the money used for citations are given back to the community. The police chief has ordered over 6,000 bike lights so that officers can give them out to students who do not have them, as well as sunglasses, sunscreen and one earbud headphones coming soon.

“We are trying to educate the students before citing them,” said Officer Ray Holguin of the UCDPD. “We recognize how serious the issue is and we want to saturate and educate all students so that we can prevent crashes like these from happening, or prevent them if we can.”

According to Officer Holguin, some of the activities the police department has offered include providing students brief bike tours, going to campus apartment complexes and showing safety videos and pulling students over at night to give them bike lights.

“This way when students say they don’t have bike lights, we can give it to them,” Holguin said. “We are trying to pursue a nonstop education [in traffic laws] for them.”

The police department has been spending a lot of money and effort in order to raise awareness of bike safety, and officers are constantly looking for better ways to improve their methods. If students have any questions or would like to learn more about bike safety laws, they can contact Officer Holguin at the dispatch number or come to the UCDPD on campus.

TAMMY LEE can be reached at city@theaggie.org