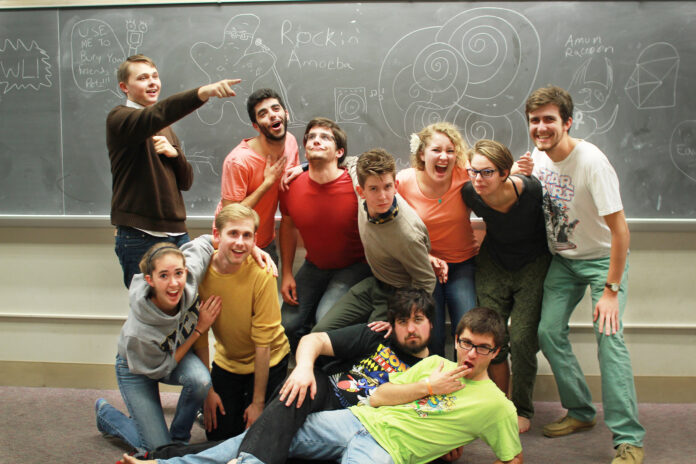 Birdstrike Theatre, UC Davis’ long-form improvisational group, will perform their first show of the school year on Nov. 1 in Kleiber 3.

“This show will be all live, unlike our quarterly ‘big shows,’” said Sarah Lloyd, a Birdstrike member and second-year chemistry major. “It will be 100 percent improv.”

The members of Birdstrike Theatre do long-form improv, which Lloyd mentions is different from the improv that is seen on “Whose Line Is It Anyway?” which is short-form improv.

“It’s not a type for comedy that allows for one-liners and jokes, but instead allows for situational and character-based humor,” Lloyd said. “We get into characters, and then the situations we get the characters into are funny.”

One example Lloyd gave was a scene in which she and another performer acted out a scene in which Lloyd’s character was discovered to be in love with marshmallows. Charlie Norton, a fourth-year evolution and ecology major, said that long-form improv allows for some interesting and funny scenes.

“Some of the best scenes are the ones where we all end up reading each other’s minds really well and come up with a cohesive idea,” Norton said. “When we end up on the same page and perform for an extended period of time it can get really good.”

Norton also said that Birdstrike incorporates the audience into their performances.

“Audience input really drives what we do on stage. We’ll do things where we interview the audience or we’ll use someone’s iPod. We’ll work with the audience to do whatever we can,” Norton said.

The members of Birdstrike Theatre are from various groups but share an interest in improv. Birdstrike Theatre President Omri Kruvi, a fourth-year landscape architecture major, joined the group in his first year in order to find a hobby.

“I discovered improv in high school and I enjoyed it a lot,” Kruvi said. “I had a good time and I wanted to meet other people who were interested in it as well.”

Lloyd also did improv in high school and was seeking an improv group at UC Davis.

“I found out about Birdstrike and saw they were advertising for auditions and workshops,” Lloyd said. “I went to one of the workshops, and ended up on the team.”

Previous improv experience is not required for joining Birdstrike.

“I joined in fall 2012 because I needed a hobby that wasn’t science,” Norton said. “I hadn’t done any improv before this. I tried it on a whim and managed to be somehow successful at it.”

Kruvi said Birdstrike is something that caters to a college audience, and people can expect something different every time.