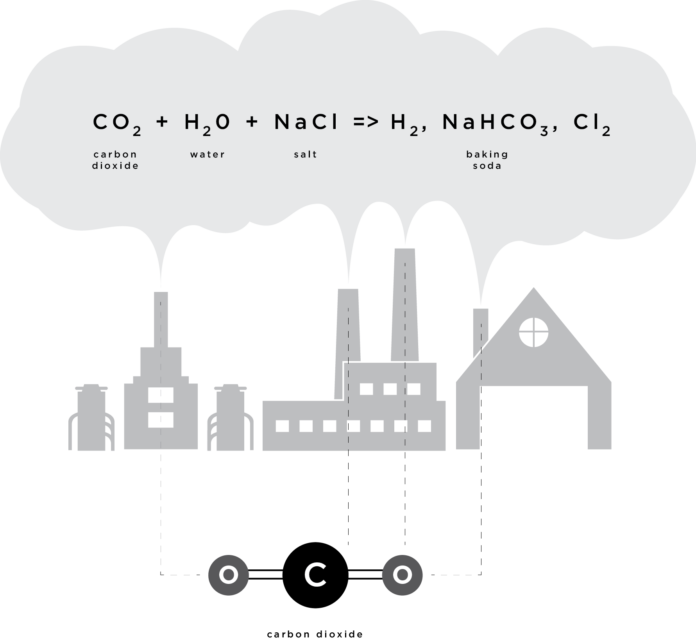 The construction of a carbon dioxide (CO2) recycling plant in San Antonio, Texas will employ new technology to trap CO2 from power stations and industrial manufacturing processes before it is released into the atmosphere.

Using technology from Skyonic, construction began on the SkyMine demonstration plant on Sept. 30.

The technology utilizes heat in waste gases from industrial chimneys, which is then used to generate electricity. Then the carbon dioxide, sulfur dioxide, nitrogen oxides and heavy metals like mercury are scrubbed from the waste gases and stored. The CO2 enters absorption chambers where it is treated with sodium hydroxide (aka caustic soda ) made from salt and water. The chemical reaction that occurs is:

The byproducts of this chemical reaction are baking soda (NaHCO3), hydrogen gas (H2) and chlorine gas (Cl2), all of which have multiple commercial uses. Hydrogen and chlorine gases, for example, can be dissolved in water to make hydrochloric acid, which is frequently used as an industrial solvent.

Furthermore, the SkyMine scrubber technology is less costly and more efficient than the current technology being used in industry, which can cost hundreds of millions up front and millions more annually for maintenance.

“In North America alone, the market for carbonates, soaps [and] limestone products used in making paper, cement or fine chalks is worth $7.5 billion. Even if only about half of that is lucrative, we’ll be able to drive down the price of [the] carbon sequestration process to around $20 per ton. The market will deliver the most sequestration at the least cost to society,” said Joe Jones, CEO and founder of Skyonic.

However, William Casey, a professor of analytical chemistry, had some important comments about the project.

“There are a couple of points to note. They apparently aren’t scrubbing the CO2out of ambient air but putting their plant near a source of CO2, like a power plant,” said Casey in an email interview. “It is preventing CO2 from entering the atmosphere from combustion. This distinction is important because it takes much more energy to scrub the low levels of CO2 out of the atmosphere in the presence of so many other gases.”

Casey continues to explain that this reaction is atypical. Usually the reaction of carbon dioxide and water makes carbonic acid (H2CO3) that then dissociates to form bicarbonate (HCO3(-)). The reaction that Skyonic reports makes hydrogen gas, which is a powerful way to store energy, a detail that may be due to the reaction occurring at such high temperatures, utilizing the exhaust from industry.

Unfortunately, this technology alone will not curb climate change. The Skyonic plant in Texas is projected to be able to remove 83,000 tons of CO2 per year compared to the estimated 5.5 million tons that the U.S. produces annually.

“This is a good project and innovative in terms of the scale of CO2 mineralization that has not been done before. Industrial CO2 capture is an important part of the CCS story. However, given the scale of the climate change challenge (and the volumes of CO2 emitted from the power sector alone), traditional CO2 storage will be needed alongside projects like Skyonic,” said policy and communications manager at the Carbon Capture and Storage Association Judith Shapiro.

Regulations already exist requiring those in industry to filter sulphur and nitrous dioxides from their smokestacks. New EPA standards tighten restrictions on allowable emissions from power stations, a change that could drive up the demand for SkyMine, which is a relatively small and easily installed piece of equipment.

Capitol SkyMine is scheduled for completion in 2014, and if everything goes as planned, the plant is projected to capture 300,000 tons of CO2emissions annually.