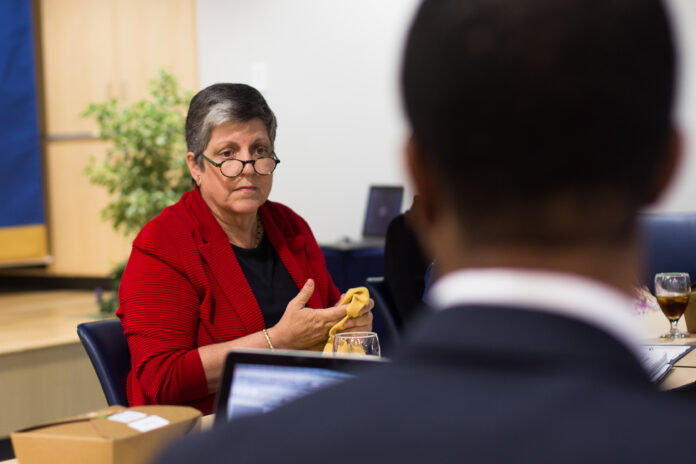 University of California President Janet Napolitano announced Wednesday that she would immediately allocate $15 million to programs for undocumented students, graduate students and postdoctoral fellows as one of her first actions in office.

During her first major public speech as president at a San Francisco hotel, Napolitano said she will allocate a total of $5 million to support the approximately 900 undocumented students in the UC. The funds will be used for resources such as financial aid, advisers and student service centers for undocumented students.

“These Dreamers, as they are often called, are students who would have benefited from a federal DREAM Act,” Napolitano said, referring to the federal legislation that would have granted residency to undocumented students who attended U.S. high schools. “They are students who deserve the opportunity to succeed and to thrive at UC.”

Seth Ronquillo, a fourth-year film and linguistics student, co-chair of IDEAS, UCLA’s undocumented student group, and a former Daily Bruin columnist, said the initiative shows she is listening to undocumented students, who voiced their concerns to her in multiple meetings this month.

“We’ll keep on pushing for undocumented student needs, because there were other demands that still need to be accommodated,” said Ronquillo.

Ronquillo said he still wishes Napolitano would issue a definitive statement saying she will be a champion of immigration reform and undocumented individuals in general – a request he mentioned to her when she came to UCLA earlier this month.

He also said he wants Napolitano to find a way for undocumented teaching assistants to be paid. They currently cannot receive pay since they do not have Social Security numbers.

Napolitano also announced she would dedicate $5 million to graduate student recruitment and $5 million to a UC program that caters to women and minority postdoctoral fellows.

“In two weeks, I’m going to be coming to the UC Board of Regents with some big ideas for consideration,” Napolitano said. “In the meantime, however, I’ve heard enough to know that if we are to remain a premier research university, we must increase our support for postdoctoral fellows and graduate students.”

However, Nicole Robinson, president of the Graduate Students Association, said she doesn’t think the funding will be able to fully make amends for the years of budget cuts the UC has seen to student programs.

“Any amount of money that goes back into the system is a good thing,” Robinson said. “At the same time, so much money was cut over the past several years.”

But Robinson said she appreciates the allocation. Budget cuts have made it harder for UCLA to hire enough teaching assistants and have enough classes to meet growing enrollment, and the $5 million for graduate student recruitment would help do this, Robinson said.

No tuition or state dollars will be used for the initiatives. The money will come from one-time reserves Napolitano can use at her discretion.

In the rest of her speech, Napolitano said supporting UC research, technology and diversity would be among her top priorities.

Napolitano said she is developing more ideas that she will bring to her first UC Board of Regents meeting next month. She recently told UCLA students she will bring her ideas for UC revenue solutions to the board.

Although Napolitano mentioned in her speech she has been studying the UC budget, there are still other questions left unanswered about how she plans to solve the UC’s funding problem, said Daniel Mitchell, professor emeritus at the UCLA Anderson School of Management and Luskin School of Public Affairs. Such questions include how Napolitano will resolve the UC’s decreasing amount of available campus space and whether administrative efficiency efforts will be enough to bridge the UC’s funding gap.

“The next regents meeting is in mid-November and, although the agenda isn’t yet posted, there will surely be some real issues on the table,” Mitchell said. “(Napolitano) talked about a learning curve so she will need to be well along that curve in a couple of weeks from now.”

The regents will meet on Nov. 12-14 at the UC San Francisco Mission Bay campus.

This story was originally posted by the Daily Bruin