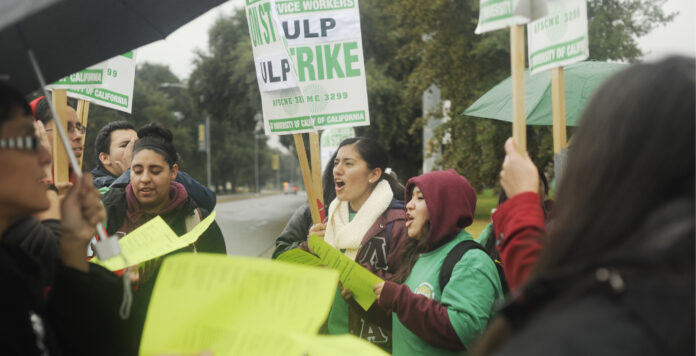 On Nov. 20, the American Federation of State, County and Municipal Employees for the University of California (AFSCME 3299) went on a one-day Unfair Labor Practice Strike of nine UC campuses and five UC medical centers. The union, which represents university service and patient care workers, struck in response to alleged intimidation by UC management when they participated in a two-day hospital strike in May.

The systemwide strike began at 6 a.m. and ended at 7 p.m. on the same day. AFSCME 3299 members employed at UC Davis held their strike at the corner of Hutchinson Drive and La Rue Road.

According to an AFSCME 3299 press release, the union stated that UC administration illegally harassed and intimidated service and patient care workers when they struck to advocate for patient safety.

“We’re here because of an unfair labor practice. When employees expressed safety concerns, they’ve actually been intimidated and harassed by management to not bring it up. We’re here to express that we’re tired of being harassed for speaking up on the behalf of patients and students’ safety,” said Fernando Garcia, AFSCME 3299 member and a UC Davis grounds employee.

Leticia Garcia-Prado, a medical assistant at the Student Health Center, said her administrators harassed her with questions on whether she was going to come to work or not when she struck in May. She said she was threatened both verbally and through email.

“We got emails that actually said we could be disciplined if we didn’t call in. We don’t have to call in. Once the University gets notified, they should expect us to be exercising our right to strike and they shouldn’t be asking us about it on a regular basis,” Garcia-Prado said.

Prior to the union’s Nov. 20 strike, Garcia-Prado said that university management harassed her again about her intention to come into work, but with different wording.

“We did of course receive similar emails today, but they changed the wording. They said we [didn’t] have to come in, but we [could] and they [wouldn’t] tell our union,” Garcia-Prado said.

Although Jason Henel, a AFSCME 3299 spokesperson, is hopeful for an apology and for legal action to be taken against the UC, he said that the union’s main priority is for the university to stop their alleged harassment of workers.

“The very first thing we want is for them is to cease and desist their intimidation and harassment of workers. It’s just a shame that they continually threaten us with disciplinary actions for speaking up for better staffing levels and safety measures. That just has to end,” Henel said.

According to Shelly Meron, University of California Office of the President spokeswoman, UC administration maintained their behavior in response to the strike was not illegal. Meron said the UC followed its normal procedure of asking employees about their intention to come into work in order to prepare for the strike and safely care for patients.

“What happened here is that the university asked AFSCME workers and its employees last May if they planned to come into work during the strike, which is our normal procedure and legally permissible. We did that so we could adjust our staffing and prepare for the strike so that we could care for our patients,” Meron said.

In March, the Public Employment Relations Board (PERB) will be holding a hearing to determine whether there was any wrongdoing on the part of the UC according to Meron.

Meron said the strike has had a negative impact on UC medical centers.

“We have had a lot of medical appointments cancelled. Certain procedures or elective surgeries have been delayed. People who are getting lab tests or therapies aren’t getting those in a timely manner. Our emergency room may have to go on drive-by status which means ambulances with critically ill patients might have to travel to other facilities to get emergency care. It’s been very disruptive to campuses,” Meron said.

Charles Casey, the senior public information officer for the UC Davis health system, contends the AFSCME’s 3299’s strike has inconvenienced the UC Davis medical center, but not as drastic as Meron claims.

“It certainly inconvenienced some patients, but many operations and activities here are as close to normal as possible. We’re still seeing patients in the emergency department; we’re still doing surgeries. We didn’t reschedule much at all. It has had an inconvenient impact, but it has not shut down the hospital. We expect to be back to completely normal tomorrow and throughout the rest of the week,” Casey said.

According to Keith Sterling, UC Davis news and media director, the strike’s impact lies primarily with food service workers. Sterling claims UC Davis has arranged for supplemental crews to cover any shifts needed to be worked.

Along with patient care workers, AFSCME 3299 includes university service workers who struck in support of their fellow members and to fight for worker’s safety for both parties. For Katrina Swim, a lead cook at Tercero Dining Commons, service employees are overworked which she believes endangers the safety of customers, co-workers and the workers themselves.

Accompanying AFSCME 3299 members on strike was UAW Local 2865, the UC Student-Workers’ Union, who filed a sympathy strike in support of the service union’s claims.

“We believe it’s important to stand up in solidarity with AFSCME because they’ve been experiencing a campaign of illegal intimidation and harassment by the UC and we want to show that this is not acceptable,” said Caroline Mckusick, a member of UAW’s executive board.

Although several teaching assistants cancelled discussion sections to attend the strike, Rebecca Miller, a first-year animal science major, believes this will not have a large impact on students.

“I don’t think [the strike] will compromise anything. …We’re adults here; I feel like we can deal with one day,” Miller said.

According to Henel, AFSCME 3299’s primary plan after the strike is continuing to fight for safe staffing.

“The safety conditions directly impact students and patients. With reduced staffing, you have situations where people are trying to do much more with less. There’s been a 20 percent increase in worker injury in the past years. One in 10 workers are going to be injured on the job. That is unacceptable,” Henel said.

Additionally, Meron said that every offer the UC has made towards AFSCME 3299 in respect to other union goals has been rejected.

“Our staffing is appropriate currently. That is our opinion. This is not about staffing; this is about AFSCME’s refusal to compromise with us at the bargaining table. We’ve made several offers to them including wage increases, health benefits, pensions — all the issues they have told us are important to them. And AFSCME has refused all of those offers,” Meron said.

For Ricardo Martinez, a core member of the Student Labor Organization, the alleged intimidations toward union members are disconcerting. He worries the possible failure of AFSCME’s plight might make it harder for students to voice their complaints.

“Where we’ve come in society, to have these tactics put on people, you’re really left baffled by the actions the UC is taking. If the workers are able to get struck down, the students will probably be crushed,” Martinez said.

According to Meron, the service union and the University are still in negotiation. A planned hearing for AFSCME 3299’s complaints is scheduled for March 2014.