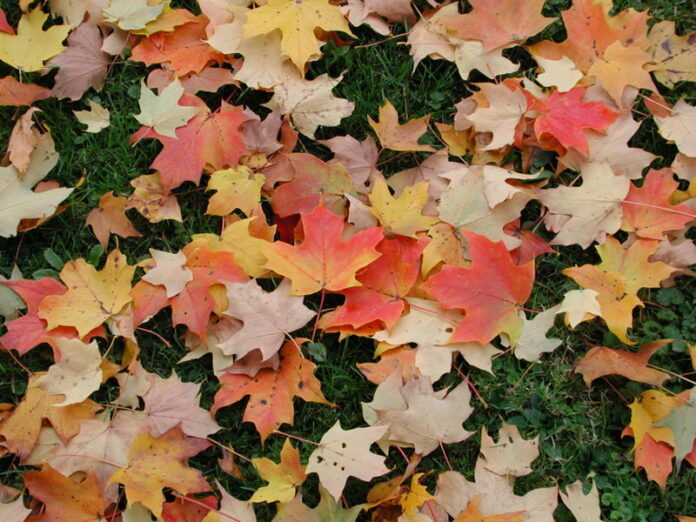 It’s that time of year when the thousands of trees on and off campus experience a dramatic change before the cold winter. Leaves are turning gold, red and orange — what is the secret behind these changes?

To answer that question, we need to understand the biological purpose of leaves and their chemical components. Leaves are the part of a plant that photosynthesize. They take in energy from the sun in the form of light and turn it into a form they can use, namely, glucose and other sugars.

Why do leaves do this instead of other parts of the plant? In trees, especially, leaves are responsible for photosynthesis because they are green. Their unique structure also aids them in their ability to make sugars, but the most important part is their color. The green in plants comes from a specific light-absorbing pigment, known as chlorophyll a.

“Leaves are green because the primary photosynthetic pigment, chlorophyll, absorbs the red and blue spectra of light while reflecting the wavelength of visible light that corresponds to green,” said Zachary Chestnut, a plant biology graduate student, in an email.

Essentially, leaves are green because it is the only wavelength of light they do not absorb.

Chlorophyll is one of the most important molecules on the planet. With chlorophyll and other light-absorbing pigments, plants can absorb a range of colors, allowing them to grow in a variety of locations and periods in a year.

“I remember talking to a friend of mine about how we barely noticed the colors changing at first, but now that we have, we realized how beautiful the Davis campus looks with all of the leaves changing color,” said Bhumika Kukreja, a second-year microbiology and international relations double major. “There is such a wide variety of plants that we get to witness a wide range of color changes, and that’s really quite amazing.”

The sun doesn’t shine the same all year long, and in winter especially, the sun may never even make it through the clouds on a given day. This causes the temperature to go down as the northern and southern hemispheres take turns tilting away from the sun.

This temperature decrease is a signal for certain kinds of plants to make changes to their internal chemistry.

According to Chestnut, the accessory pigments are in plants all year long, but chlorophyll masks them. When fall arrives, chlorophyll departs from the leaves, allowing the other pigments to become visible, thus changing the color of the leaves.

Some plants, however, do not need to change how they photosynthesize light. These are called evergreens. They include conifers (think pine cones), holly (Christmas time), and eucalyptus trees (Golden Gate park and Vicks VapoRub).

“First of all, the leaf structure is very different,” Dehesh said. “Second, because the gymnosperms — and the conifers specifically — they have a different metabolic process. They grow very slowly, and their metabolism is also accordingly not as rapid.”

These plants do not need to slow down in winter because they are always growing slowly.

As simple as they may seem, plants are some of the most complex organisms on our planet. We use them in almost every realm of our lives, from medicine to housing. The complexity of their internal structures and processes only adds to their beauty.