Experimental College holds “I Wish I Was Learning” campaign 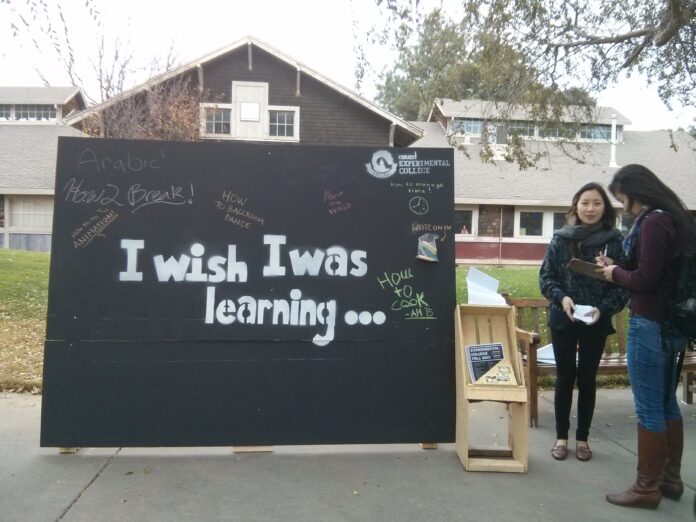 If you have walked past the Silo or Memorial Union (MU) over the past couple days between 10 a.m. and 3 p.m., you may have spotted groups of students writing on a large blackboard.

In an effort to connect with the UC Davis student population, the Experimental College is holding their “I Wish I Was Learning” campaign on campus this week.

“I was inspired by the ‘Before I Graduate’ board on campus last year,” said campaign leader and second-year managerial economics and design double major Tiffany Trieu. “The idea is to have a more creative and hands-on campaign to see what students want to learn.”

The 6 foot by 8 foot blackboard reading “I Wish I Was Learning” was on display in the Silo Yard on Dec. 3. The MU hosted the campaign on both Dec. 4 and Dec. 5.

“This is the project I’ve been most hopeful about. It’s the most thought-provoking and interactive, and anything that is interactive with a target audience is a good thing,” said Experimental College Street Hip Hop and DJ program instructor Mike Cagley. “The students are telling us what they want, so we can see if we already have those classes in place or if we can make the classes for them.”

Initially started as an ASUCD unit by students in 1966, the Experimental College was made to create classes that students wanted to take, but were not offered by the University. Today, with over 200 class members, it offers classes to students and the greater Davis community.

As one of only two Experimental Colleges on the west coast and the only UC unit today, the UC Davis organization offers classes ranging from topics like martial arts and dance to personal finance and juggling.

“Students are given the ability to take a class and not worry about midterms and finals. Anyone can just take a class for the pure joy of wanting to learn,” Cagley said. “At the very base of what the whole thing is about, it’s an activity to build the voice of opinion.”

Keeping up with a changing population and its interests has been a recent challenge for the Experimental College, as demonstrated by a recent budget deficit.

“The reason why we have a budget deficit is because we haven’t been changing with the times,” Vinson said. “The best way to change with the times is to ask the students what void we can fill, to provide them with what their needs are.”

Although Experimental College Hapkido instructor and Experimental College Instructor’s Advisory Board Chair Rick Schubert said that budget circumstances have drastically improved this quarter and the likelihood of shutdown has decreased significantly, he also said a change in marketing strategy to combat the last five years’ budget deficit is necessary.

With a fast-paced quarter system, many Aggies find it easy to get wrapped up in academics without realizing it. Knowing this, the Experimental College hopes that the campaign will help start the conversation about interests outside of scholastic pursuits.

“I think it’s pretty easy as a student these days to lose track of the fact that college provides a unique opportunity to learn things,” Schubert said. “The blackboard campaign provides students with the opportunity to step back and ask themselves what they really do want to learn.”

Trieu came up with the publicity idea earlier in the quarter, and worked with other Experimental College student volunteers and a budget of $120 to bring the project to life.

“We want the chalkboard as a survey and a way for people to learn about what we offer at the Experimental College,” Trieu said. “Students should know that any idea that they have isn’t a bad idea, we offer unconventional classes.”

The responses and discussion brought about by the campaign are expected to give the Experimental College a unique perspective on what exactly students today are interested in learning, so that change can be made within the year.

The original marketing model for the Experimental College, which was successful for decades, was heavily focused on print media. As the media industry made the transition to an electronic focus, Schubert believes the Experimental College was very slow in responding to this shift, but is on track to balance its budget by the year’s end.

“This effort is really about maintaining and bringing the Experimental College back to how it used to be,”Cagley said. “It’s something that we’re trying to take all of our experiences and knowledge to push it forward. That same energy is going into why we are having this campaign.”

Since the decision on whether the Experimental College will shut down is undetermined, many have reflected on how the Davis campus would be without the unit.

“Without the Experimental College, I believe that we wouldn’t have students representing students. Because this is such a grassroots unit, the students wouldn’t have a voice,” Vinson said. “We bring the community to alternative learning in order to supplement their academic learning at the university.”